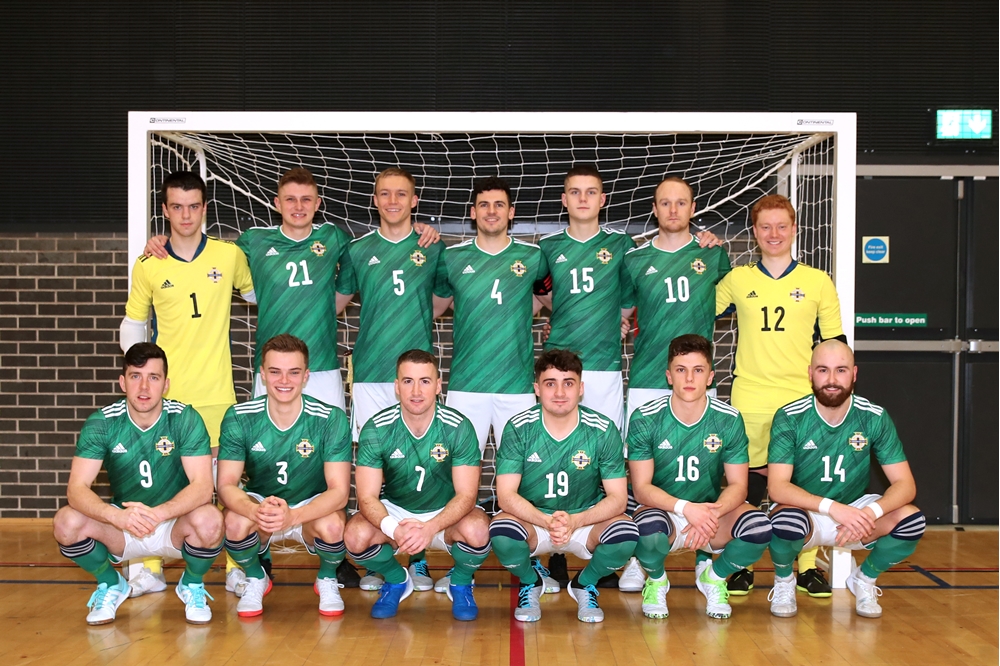 Northern Ireland’s men’s futsal team had mixed fortunes against Gibraltar over the weekend, registering an emphatic win and a narrow defeat in international friendlies.

In game one on Friday Northern Ireland were clinical in front of goal, however the second game on Sunday saw them squander a litany of chances. Both matches were played at Newry Leisure Centre.

Northern Ireland took an early lead in the first match thanks to a stunning left foot volley from Conor Glenholmes and that set the tone for a fine display.

The boys in green and white scored again five minutes later through Craig Taylor, who met a cross from Conor Kernohan at the back post.

Gibraltar pulled a goal back via a set piece but Northern Ireland increased their intensity levels and scored two more goals in the first half through Scott Gunn and Glenholmes.

In the second half Northern Ireland maintained their intensity and quickly scored again through captain Adam Barr before putting the game out of the visitors’ reach with their sixth goal of the evening. Goalie Philip Irvine’s perfectly weighted throw found Ryan Dabbs and he finished superbly from a tight angle.

The home side’s seventh goal came through a Gunn dribble which caused confusion in the Gibraltar defence. His shot somehow found its way through a group of bodies to nestle in the net.

The final goal came from Glenholmes as he completed his hat-trick via a well worked play utilising the fly goalkeeper.

It meant Glenholmes takes his place in Northern Ireland futsal history as being the first international player, male or female, to score three goals in a game.

In game two on Sunday the visitors started with greater intensity and Northern Ireland quickly discovered that they were in for a much more difficult game.

Gibraltar scored two early goals which emanated from defensive mistakes. It provided them with a platform to defend for the remainder of the half, although Northern Ireland did manage to pull one back through a great solo effort from Conor Millar.

In the second half Northern Ireland raised their intensity and dominated possession, creating numerous chances. They hit the woodwork on several occasions, while the Gibraltar goalkeeper produced a string of fine saves.

Halfway through the second period Northern Ireland equalised through Craig Taylor and continued to push forward to find the winner.

Gibraltar responded by soaking up the pressure and took the lead again through a counter-attack.

With two minutes remaining Northern Ireland made a tactical switch and brought on the fly goalkeeper, Scott Gunn. This high reward, high risk strategy did not pay off, however, as Gibraltar blocked a Northern Ireland shot and eventually scored into an empty net.

Jonathan Michael’s side had the final say in the game with the best strike over the whole weekend.

With five seconds to go Craig Taylor received the ball on the right-hand side of the court and dribbled beyond a number of Gibraltar defenders before unleashing an unstoppable left foot strike into the corner of the net as the buzzer sounded.

Afterwards head coach Michael said: “The 8-1 victory was great, while the 4-3 defeat was disappointing, however the squad will have learnt a lot from both games.”

The Northern Ireland squad will now focus on further preparations for Euro qualifiers at the end of the month. They are set to play Hungary, Lithuania and Turkey in Jonava, Lithuania, from Wednesday 29 January to Saturday 1 February.