Be The Last Fan Standing And Win A New Vauxhall Corsa 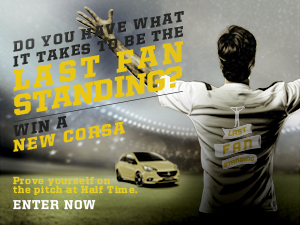 England, Northern Ireland, Scotland and Wales fans can take part in The Last Fan Standing competition which for the first time will see fans from each nation compete against each other in a series of challenges.

The challenge will take place during half-time of each of the home nations home games, kicking off with a penalty shootout between fans of Scotland when they face Northern Ireland

Cheryl Stibbs, Vauxhall Sponsorship Marketing Manager, said: “The Last Fan Standing will be an exciting battle until the end of the European Championship qualifying campaign. It is unique in that all four home nations will be competing against each other for a new Vauxhall Corsa.

“This is the first time that we’ve ran a half-time competition across all of our home nations, it’s great that we can have some friendly rivalry between the nations, around a sport that we are all passionate about,” she added.

Supporters from each of the four nations will each be set a different half-time challenge in each of their home games, with the first challenge coming in the Scotland vs Northern Ireland match.

Three supporters from the same nation will compete against each other, with only one progressing through to their nation’s next home match where they will face another exciting challenge.

At the end of the European Championships qualifying campaign the remaining fan from each home nation will compete in the final challenge to win a brand new Vauxhall Corsa.

To enter the competition and be in with a chance of winning a new Vauxhall Corsa please visit the Vauxhall Football website.