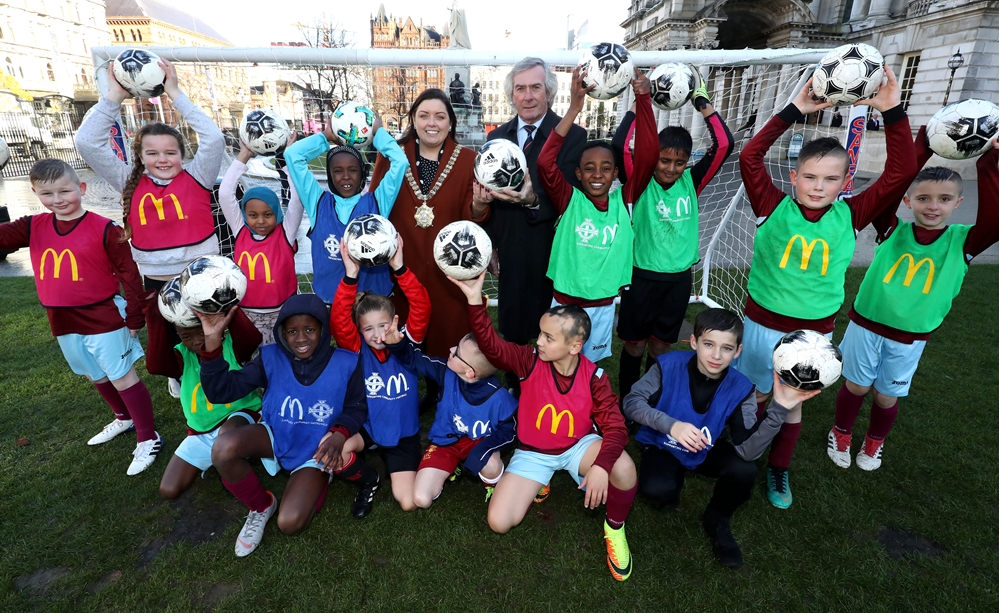 McDonald’s has announced a new four-year community partnership with the Irish FA which will drive participation and inclusivity in grassroots football across Northern Ireland.

The announcement builds on the long-standing partnership between McDonald’s and the Irish FA which has been in place for 16 years.

McDonald’s is the longest-standing supporter of grassroots football in the UK, having worked with the FA, the Irish FA, Scottish FA and FAW since 2002 and it is renewing its partnerships with all the associations.

The new UK wide programme will build on the growth of grassroots football over the past decade and a half and it will see the introduction of a participation-based programme aiming to provide five million hours of fun football for children by 2022.

Through ‘McDonald’s Fun Football’ turn up and play coaching sessions and more Community Football Days than ever before, McDonald’s will provide over 500,000 children with the opportunity to try football for the first time. The wider focus of the programme will support accredited grassroots clubs and their volunteers, helping to raise the standards of grassroots football across the UK and improving the grassroots experience for young, aspiring footballers. In addition to the Fun Football sessions other key elements of the programme include the Grassroots Football Awards, Small Sided games programme and a series of Community Football Days being arranged in locations throughout Northern Ireland and across the UK.

McDonald’s Northern Ireland Football Ambassador and Spurs legend Pat Jennings speaking about the new partnership, said, “This is a very significant milestone for grassroots football and it’s great news for young people across Northern Ireland.  The new partnership between McDonald’s and the Irish FA will ensure continued investment in local football with inclusivity and participation at its core meaning that the programme will introduce many children to football for the first time. The game is evolving all the time and its great that children in the local areas will get to benefit from this long-standing grassroots football partnership.”

Irish FA Director of Sales & Marketing, Simon Fitzpatrick, added: “McDonald’s shares the Irish FA’s vision to promote, foster and develop football for all, so we are therefore delighted to be extending our partnership with the company for a further four years. This investment will help boost participation at grassroots level and will help inspire young boys and girls to dream of wearing the green shirt of Northern Ireland. We look forward to working with McDonald’s on this fantastic project and I have no doubt that together we will hit the ambitious targets that have been set.”

For further information on McDonald’s involvement in grassroots football and to find out how your club could benefit visit www.mcdonalds.co.uk/football or follow @FunFootballUK on Twitter and Instagram.