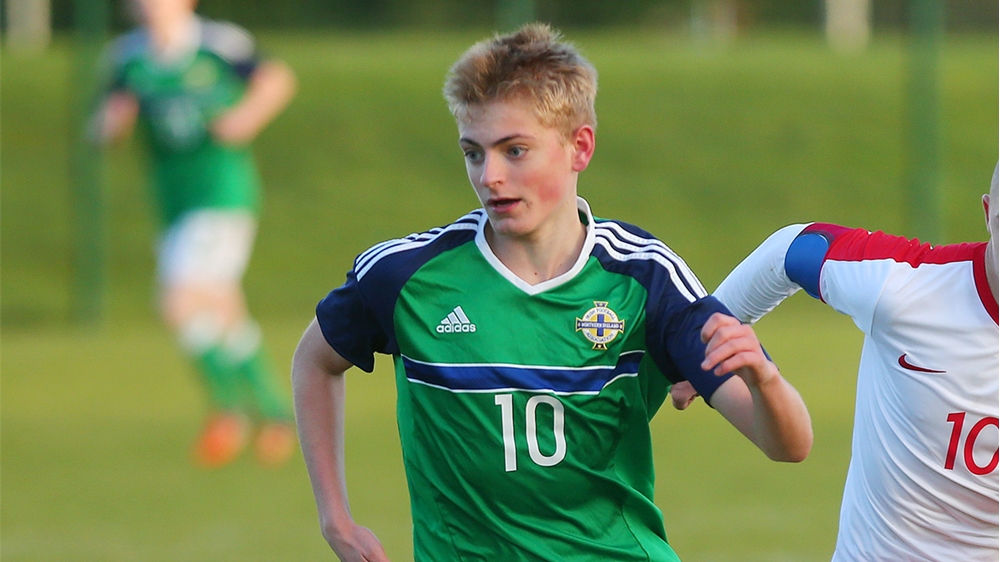 Northern Ireland’s Men’s Under-17s have reached the elite round of the qualifiers for the 2019 U17 Euros following a couple of fine displays in Turkey.

Stephen Frail’s side finished second in their group in stage one of the qualification process – and that was enough to see them through to the elite stage, from which 15 teams will qualify to line up alongside hosts Republic of Ireland in the finals next summer.

After narrowly losing their first game in a UEFA U17 mini qualification tournament in Turkey – they were defeated 1-0 by eventual group winners Slovakia – Northern Ireland held the host nation to a 1-1 draw. Ben Wylie scored on 33 minutes to cancel out Muhammet Akpmar’s opener for the Turks.

And yesterday the U17s sealed second spot in the group on goal difference after Slovakia defeated Turkey 3-0 and Frail’s team smashed six past San Marino without reply, with Celtic striker Wylie grabbing a hat-trick.

In their opening two games Northern Ireland had arguably created enough to win both games. Against Slovakia they had 13 attempts on goal compared to Slovakia’s 11, while against the Turks they had eight efforts compared to the hosts’ seven.

They went into yesterday’s game knowing they had to both defeat San Marino and score plenty of goals against them to have any chance of progressing.

Turkey, who defeated San Marino 6-0 in their opening game, produced plenty of chances against the Slovakians, however Slovakia were more clinical in front of goal and deserved the win to finish the group with a 100% record.

In their game against San Marino - played at the Arslan Zeki Demirci Sports Complex - Frail’s boys quickly got the ball rolling when Wylie was upended by Matteoni in the fifth minute and Darragh Burns stepped up to stroke the spot kick home.

Two minutes later Northern Ireland were awarded a second penalty. Again Wylie was involved – he was fouled by Severi inside the penalty area – and again St Patrick’s Athletic player Burns converted from the spot.

On 12 minutes the lively Wylie scored the first of his three goals. Barry Crowe found him with a neat pass and Wylie duly found the net.

Northern Ireland continued to push forward and Wylie grabbed his second of the game in the 28thminute. Fleetwood Town player Crowe fed him the ball once again and he swept it into the net.

Then it was Linfield striker Dale Taylor’s turn to get his name on the scoresheet. Crowe provided another assist as Taylor made it 5-0 with a smart finish.

As half-time approached Wylie had an opportunity to complete his hat-trick but missed the target when well placed.

However, it did not take him long to score again. Six minutes into the second half he pounced on a loose ball and stroked it home to complete his hat-trick.

Northern Ireland continued to push forward. Wylie had further chances to score, while substitute Ross McCausland also had a couple of decent efforts. And both Carl Johnston and Baggley-Crowe had shots blocked.

The draw for the elite round will take place in Switzerland on 6 December with the games being staged next March. The finals will be held in the Republic next May.

Image: Ben Wylie grabbed a hat-trick for Northern Ireland U17s against San Marino as they reached the elite round of the 2019 U17 Euros qualifiers.