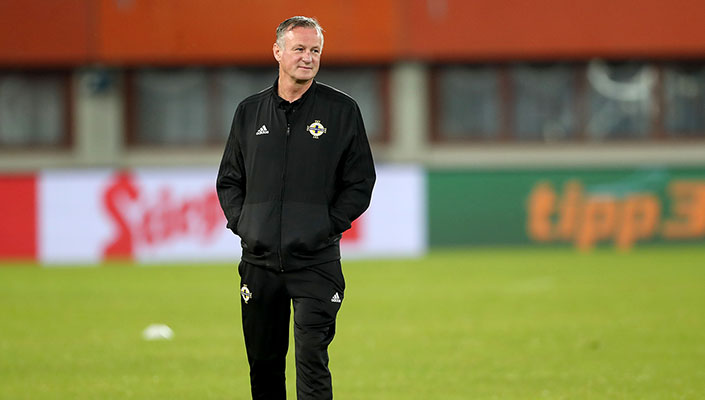 Northern Ireland are aiming to be on the front foot against Austria in Vienna this evening.

The vibe from the team camp is that they will set out to play with the high energy and attacking verve displayed in the games against Bosnia & Herzegovina and Israel last month.

In media interviews this week various players have expressed their desire to continue to build on the expansive style of football which manager Michael O’Neill has been introducing over the past 12 months.

Among them was Oliver Norwood. The Sheffield United midfielder pointed out that in the home game against Bosnia they started fast and took the initiative and they will be aiming to do that once again in the matches against Austria this evening and Bosnia & Herzegovina on Monday.

The hunger to play on the front foot means the line-up in Vienna will likely be an attack-minded 4-3-3 formation when the team are going forward, with the two wide players tucking in to make it 4-5-1 when the opposition are on the ball.

The team is expected to be along similar lines to the one that started against the Bosnians, albeit without the injured Niall McGinn and striker Kyle Lafferty.

In their first Nations League game Northern Ireland dominated - 68% possession and 26 shots - but they are not likely to have as much of the ball in the Ernst Happel Stadium.

However if they can create even half that number of chances this evening (7.45 start UK time) then they could conceivably put three points on their UEFA Nations League board.

Austria are without the talented David Alaba of Bayern Munich and Hoffenheim’s Florian Grillitsch, however in Marko Arnautovic they possess one of the most potent attacking forces in Europe. Craig Cathcart and Jonny Evans will have to be at their best to keep him quiet – and if they manage it then it could leave the door open for a first ever Northern Ireland victory in the new Nations League.