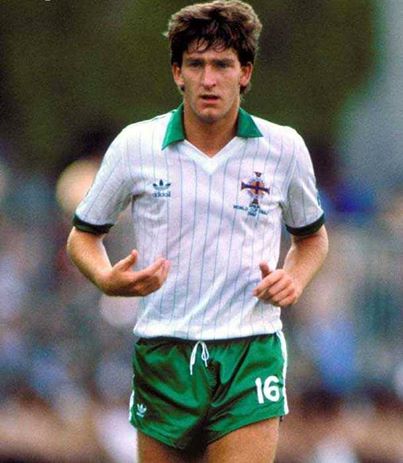 “When I was playing, qualifying was your ‘final’ and I think it still remains like that. Michael (O’Neill) got off to a tricky start, but he had a young team that blended well, stuck together and the results came. The team showed the same fight and determination that we showed 30 years ago, nothing has changed in that respect. We were brought up on those same values in Northern Ireland.”

At 17, Whiteside was the youngest ever player to appear at a World Cup when Northern Ireland went to Spain in 1982. He then went on to star at his second World Cup in Mexico in 1986.

He says: “Although I didn’t go through the qualification process in ’82, I was brought in for the finals which was amazing. I had played 100 minutes for Manchester United, having made my debut coming on for 12 minutes against Brighton and then 90 minutes against Stoke in the last game of the season. I was then whisked off to the World Cup where I played five games, meaning I played more games at the World Cup that I had in Division 1 for Manchester United.

“In ’86 I went in with a different mind set. With Brazil, Spain and Algeria in our group we knew it was going to be tough. We got off to a decent start against Algeria, when I scored after about 5 minutes. There was a bit of a deflection, but I’m claiming it! I still have a watch that was given to me for scoring the 9th fastest goal in the Mexico World Cup, which I haven’t taken off since.”

Looking forward to the Euro 2016 finals, Whiteside hopes that the team can continue the great form shown in the qualification campaign.

“We all hope that they can take forward what they have put together in the run up to the finals. They have good team morale, they all seem to get on and have a laugh, but when it comes down to the serious business they are quite capable of doing the job.

“I would still maintain that our ‘final’ was getting to France, but with the results from qualification the confidence is there so it is now just a matter of taking that into the tournament.