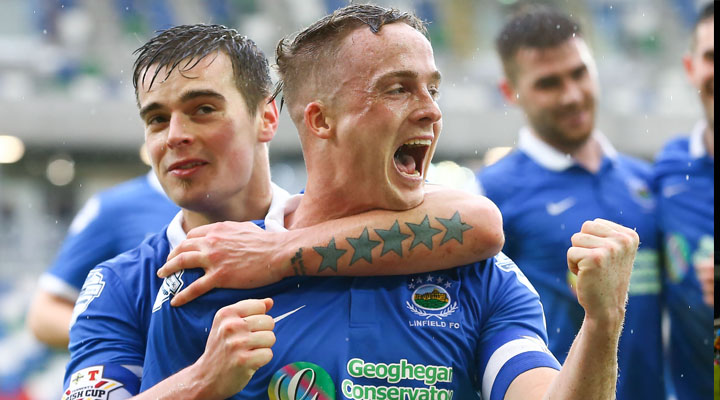 Linfield booked their place in the Tennent’s Irish Cup final thanks to a second half hat trick from midfielder Aaron Burns. It will be a 62nd appearance in the showcase for the Blues who face Glenavon in the final on the 7th May.

Linfield had the best of the early chances with Andy Waterworth almost opening the scoring in the sixth minute. Paul Smyth showed great pace down the right wing and he found his captain at the back post but his shot went just wide of the right upright.

Waterworth almost found the net four minutes later when his glancing header from a corner rebounded off the bar.   Lurgan Celtic had chances of their own in the first half. Aaron Haire found himself one on one with the keeper mid way through the first period but Ross Glendenning made a smart save in the Linfield goal to deny the mid-Ulster side the game’s first goal.

The first goal of the game came in the 60th minute. Kirk Millar whipped the ball in from the right and Burns made no mistake with the calm finish.

Lurgan Celtic almost hit back immediately when goalkeeper Glendenning dropped a ball in the Linfield goal and he was the most relieved man in the stadium to watch the ball squirt to the right of the post.

Ten minutes from time Burns made it two nil. Stephen Lowry’s smart free kick found Burns in space and he found the net for the second time.

A perfect afternoon for Linfield was complete when the referee awarded the Blues a penalty in added time. Up stepped Burns and he made no mistake from the spot.

Linfield will now be aiming for a first trophy under manager David Healy and aiming to win a record 43 Irish Cup on 7th May.