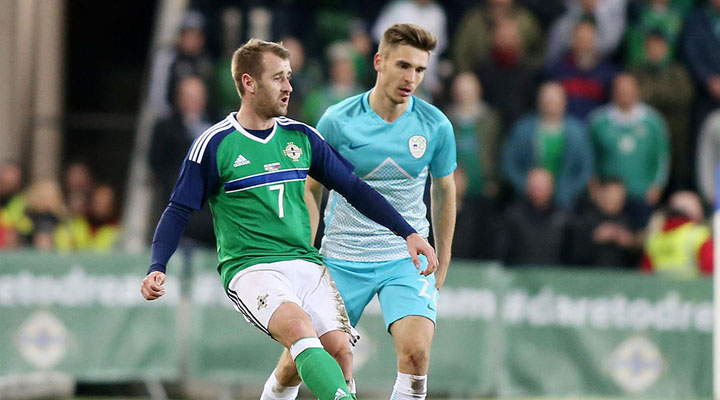 Although Celtic, who have a game in hand, are still favourites to retain the title for a fifth successive season, McGinn still believes they can push the Glasgow outfit right to the wire by winning all their remaining games.

“We know ourselves we just need to win every game between now and the end of the season and see where it takes us,” said the former Dungannon Swifts man. “It’s still very close, but we just have to concentrate on ourselves and thankfully we’ve got back to winning ways today.

“Obviously Celtic had a good result at the weekend too defeating Hearts 3-1, they’re back playing well again and they’re a very hard team to stop.”

Meanwhile striker Will Grigg made it six goals in as many games following his brace in Wigan Athletics’ emphatic 5-1 win at Shrewsbury on Saturday to send them top of League One with just six games left to play.

The 24 year-old has now found the net 22 times in 37 appearances for the Latics this term but despite Wigan extending their unbeaten run to 19 games he has urged his team-mates not to become complacent.

“It is all about timing and we are at the business end of the season and have timed our run well,” said Grigg, who was given dispensation by Michael O’Neill to miss last week’s two international warm-up matches, “but there are still plenty of games to go and we can’t get complacent.

“It was a good performance in the end from the team and, although we started a bit slow and Shrewsbury came out of the blocks faster and had a real good go, the second-half summed us up, we took complete control.

“I was also pleased to get another two goals again and with six games to go, I want as many goals as possible now!”

Unlucky Kyle Lafferty, who is desperate to get some game time at club level, missed out on making his debut for Birmingham City at the weekend after failing a late fitness test.

The Fermanagh man, who has joined the Championship outfit on loan from Norwich City until the end of the season, picked up a groin strain whilst on International duty, though he could be available for Birmingham’s home match with Brighton tomorrow evening.

Elsewhere, last Monday’s goalscorer against the Slovenians Conor Washington, had to be content with a place on the QPR bench on Friday evening though he did come on to play the final eleven minutes of the 3-2 defeat to high flying Middlesbrough.

Former Cliftonville forward Liam Boyce, who broke his hand for the second time this season whilst training with the Northern Ireland team, was a surprise inclusion in the Ross County side that slumped to a 5-2 defeat at Dundee.

Finally there was a welcome return to action for Southampton-born Josh McQuoid who made his first outing for Luton Town in nearly three months after recovering from a knee injury.