Boys Across The Water - April 18 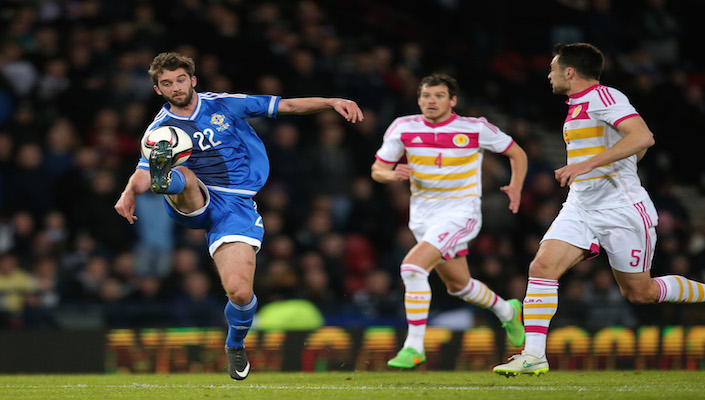 League One leaders Wigan Athletic may have failed to extend their unbeaten run to 21 games following a 3-1 to defeat to relegation threatened Doncaster Rovers, but Will Grigg still managed to get on the scoresheet for the 24th time this season.

The Northern Ireland striker’s phenomenal scoring run continued wat the weekend when he found the net for the seventh time in as many games to give the visitors the lead shortly before half time.

Rovers, who had Portadown-born defender Luke McCullough at the heart of their defence, stormed back in the second-half though to score three times to keep alive their slim hopes of avoiding the drop into League Two.

Meanwhile in League Two former Northern Ireland under-21 international midfielder Adam Chapman was among the goalscorers as Mansfield Town thumped Notts County, who had Roy Carroll on the bench, 5-0 at Field Mill.

There was disappointment though for another former under-21 international Matthew McClure, as his Dagenham & Redbridge side were relegated to the National Conference after nine years in the Football League following their 3-2 loss at Leyton Orient.

Nineteen year-old Robbie McDaid’s loan spell at Lincoln City continues to go from strength to strength after the Omagh teenager scored his third goal in four games as the Imps picked up a point in a 2-2 draw at Southport in the National Conference.

Elsewhere, midfielder Oliver Norwood recorded his seventh assist of the season after providing the cross for Michael Hectors goal in Reading’s 3-2 defeat at Leeds United, while Millwall winger Shane Ferguson also made it seven assists for the campaign when his corner was headed home by Byron Webster in the League One sides 2-1 reverse at Coventry.

On the injury front, Craig Cathcart missed Watford’s Premier League victory at West Brom after picking up a knock in the Hornets home draw with Everton last week.

The influential Jamie Ward was absent from the Nottingham Forest team that drew at Rotherham following a recurrence of a hamstring injury picked up in midweek, while defender Michael Smith limped out of Peterborough’s 4-1 success at Colchester on Saturday after suffering a tight hamstring.

Finally, Dean Shiels can look forward to a Scottish Cup Final appearance after Rangers surprisingly defeated Celtic yesterday on penalties in a thrilling semi-final encounter at Hampden Park, however in the other semi-final the Dundee United pair of Paul Paton and Billy McKay lost 4-2 in their penalty shoot-out to Championship outfit Hibernian.