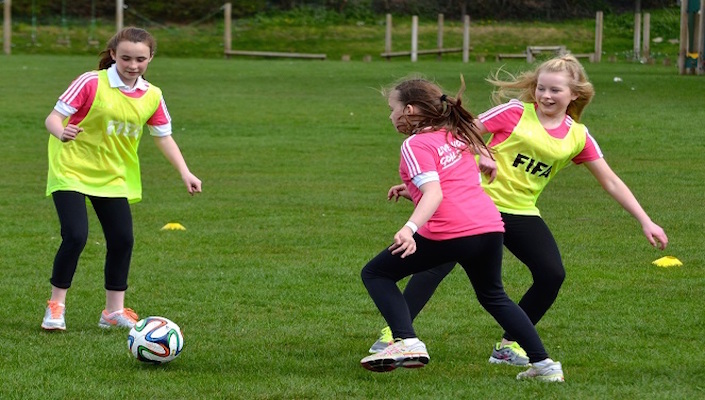 Hundreds of P6 and P7 girls from primary schools across Northern Ireland will be taking part in football roadshows over the next six weeks.

The FIFA Live Your Goals roadshows are being staged at 16 venues across the country, kicking off at Omagh Leisure Centre tomorrow (12th April).

More than 2000 girls have registered to take part in the festival days, which are free of charge and were open to P6 and P7 girls from all primary schools in Northern Ireland.

Part of the FIFA Women’s Football Development Programme, the girls’ football roadshows are aimed at increasing the number of girls that play football in Northern Ireland and helping to raise the profile of the sport.

Each roadshow will run from 10am to noon and will involve skills drills, small-sided games, inflatables, competitions and music. And female Northern Ireland international players will be attending the events to get involved with all the activities.

After Omagh roadshows are being staged at Cliftonville FC’s Solitude ground in Belfast on Wednesday (13th April), Cheney Park in Banbridge on 14th April and the Joe McAree Stadium in Dungannon on 15th April. Next week there will be events at Holycross College in Strabane (19th), Taylor’s Avenue in Carrickfergus (20th), Craigavon FC (21st) and Donard Park in Newcastle (22nd).

Then, in May, the roadshows are heading for St Cecilia’s in Derry-Londonderry (10th), Ballymena Showgrounds (11th), Valley Leisure Centre in Newtownabbey (12th) and Enniskillen’s Lakeland Forum (13th). The following week they will be visiting Londonderry Park in Newtownards (17th), Portstewart FC (18th) and Mid-Ulster Sports Arena in Cookstown (19th).

And this year’s FIFA Live Your Goals roadshow programme will conclude at Hydebank Playing Fields in Castlereagh on 20th May.