U19s edged out by Denmark in opening Euro qualifier 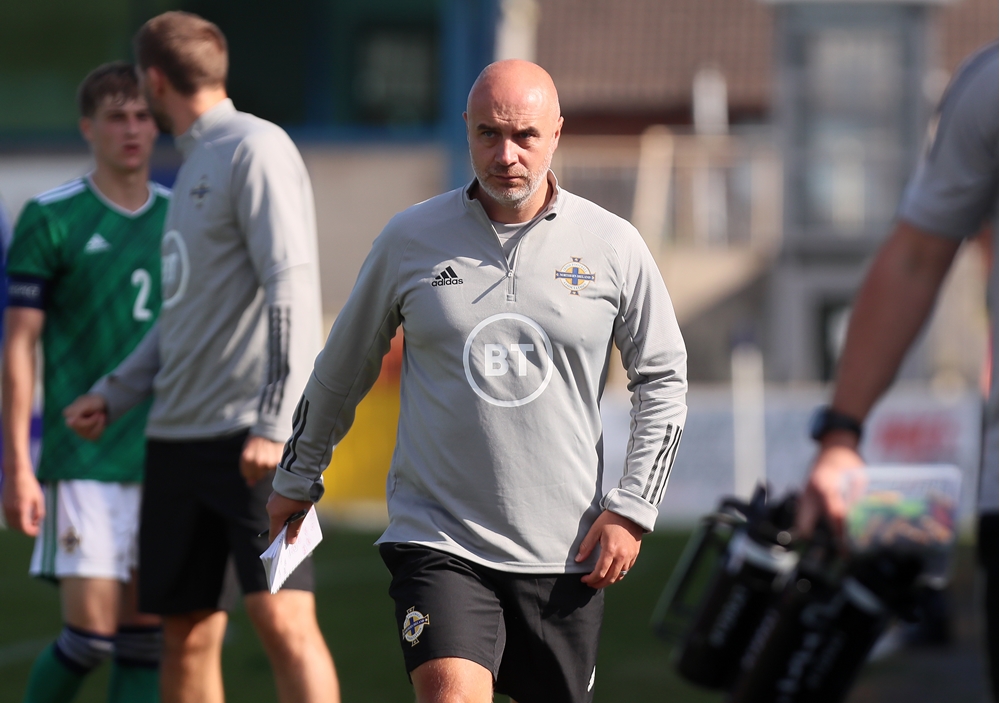 Northern Ireland U19s suffered a 2-0 defeat against Denmark today in their first match in a four-team mini tournament in the qualifying round for the next U19 Euros.

Gerard Lyttle’s side created plenty of chances in the match staged in Frydek-Mistek in Czech Republic, however the Danes were just a bit too strong for them. Northern Ireland had 12 attempts on goal compared to Denmark’s 20.

The Danes started brightly in the Group 13 clash at the Stovky stadium, with Northern Ireland keeper Josh Clarke producing a fine stop from a Marinus Larsen effort on eight minutes.

The boys in green and white’s first chance fell to striker Ross McCausland six minutes later. His drive was pushed away by Danish keeper Tobias Jakobsen for a corner.

Northern Ireland captain Sean McAllister had a shot blocked before midfielder Charlie Allen’s effort was saved by Jakobsen. Then defender McAllister missed the target before another Allen strike was held by the Danish keeper.

The lively Allen had a further effort snuffed out and Jakobsen saved from striker Ciaran McGuckin as Lyttle’s side went in search of the opener.

Caolan McBride drilled an effort wide before Clarke was equal to a free-kick from midfielder Larsen and Hojlund shot wide.

The first chance of the second half saw McCausland scoop an effort past the post. Denmark’s Gustav Mortensen had a shot blocked before Clarke held a drive from another Danish defender, Valdemar Lund.

The Danes had a few chances in quick succession around the hour mark. Hojlund had a drive blocked and Clarke made a double save from Martinsen.

In the 64th minute Denmark took the lead when midfielder Daniel Haarbo swept the ball into the net.

Clarke was called into action again on 68 minutes when he stopped an effort from substitute Mika Biereth. Five minutes later the sub had another effort blocked by the Northern Ireland defence.

On 80 minutes Northern Ireland conceded a penalty, with defender Cameron Stewart committing the foul that led to the spot kick. It was duly slotted home by Larsen to make it 2-0 to the Danes.

In the closing stages Danish sub Victor Lind shot wide of the target before Northern Ireland substitute Isaac Price screwed a shot past the post.

McAllister had the final effort of the game, a minute into added time, but by that stage the Danes had the points in the bag.

Afterwards Gerard Lyttle said: "Clearly we’re disappointed and the boys are a little bit down. We could have been a bit braver and shown a bit more positivity but there are positives to be taken. Their goalkeeper was the busier of the two in the first half and we certainly had chances during that first 45 minutes. Let’s remember that Denmark are a top team.

“We have to pick ourselves up and prepare for another difficult game against the hosts Czech Republic. They won their opening game comfortably and look a really good team. We will need to be at our best on the day to come away with anything but, with this group, I feel they are capable of it if they really believe in themselves. It’s my job, with the help of the backroom staff, to make that happen.”

Matchday two for Lyttle’s side is on Saturday (2pm start, UK time) when they will face tournament hosts Czech Republic at the same venue in Frydek-Mistek.

And their final game in Group 13 - against Kazakhstan - is being staged at the Bazaly stadium in Ostrava next Tuesday (12 October). Again it will be a 2pm kick-off UK time.