Davis: Pressure will be on Swiss 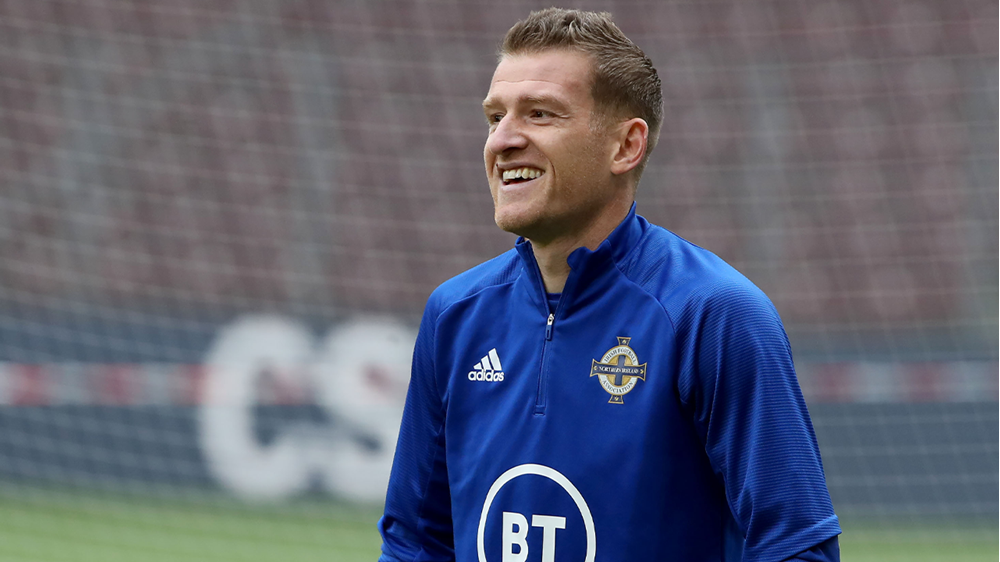 Usually by this stage during an international window it will be a case of one game down and one to go for the Northern Ireland senior men’s team – or perhaps even two to go given the prevalence of triple headers during the pandemic.

However, with a backlog of fixtures now up to date, not just Ian Baraclough’s boys but national teams across Europe face just two matches in the current window.

It means, of course, increased preparation time for the teams – and the Northern Ireland boss and his staff have been using that extra time to good effect.

New coach Adam Sadler has been putting the players through their paces for the first time and they have been responding well to his methods.

And there’s a real buzz in the camp ahead of the FIFA World Cup Qatar 2022 qualifier against Switzerland in Geneva later today (7.45pm kick-off UK time) and the game against Bulgaria in Sofia on Tuesday.

Regular Northern Ireland skipper Steven Davis believes the pressure will be on the home side at Stade de Geneve.

He said there will be an expectancy among Swiss fans that their team will claim the three points and go on to secure a World Cup finals place; ongoing UEFA protocols surrounding Covid mean the attendance will be 30% of stadium capacity, which equals 15,000 Swiss spectators and circa 400 members of the Green and White Army.

The veteran playmaker believes last month’s goalless draw between the sides in Belfast shows that Northern Ireland can match Murat Yakin’s team and he also feels a win is a must if Northern Ireland want to stay in the hunt for a place at the final tournament at the end of next year.

Fellow midfielder George Saville says Baraclough’s boys are undoubtedly the underdogs going into the game, however he insists that tag suits them.

The Swiss, who are ranked in Europe’s Top 10 national teams and reached the last eight at Euro 2020, will again be without the influential Granit Xhaka, who missed the game in Belfast. And also missing is Haris Seferovic, the man who missed a penalty in last month’s encounter at the National Football Stadium at Windsor Park. Winger Ruben Vargas is out of the game as well due to illness.

Tricky winger Xherdan Shaqiri and pacey striker Breel Embolo, who were also not available for the game in Belfast, are back though and expected to start.

Northern Ireland, despite being without seven players who were named in the original panel for the double header, have good depth in the squad now and can rise to the occasion, according to Davis.

On the plus side Baraclough has welcomed back experienced operators Stuart Dallas and Josh Magennis, who were both unavailable last month.

And Paddy McNair, who will be wearing the captain’s armband for the first time tonight as he earns his 50th cap for his country, returns after being suspended for last month’s game against the Swiss.

That encounter in Belfast was a tight affair and Baraclough is expecting more of the same at Stade de Geneve. He also firmly believes his rejigged side can win the game, noting that the two wins and a draw in the last international window had provided a huge confidence boost right across his squad.