U21 star McCalmont nets first goal of the season 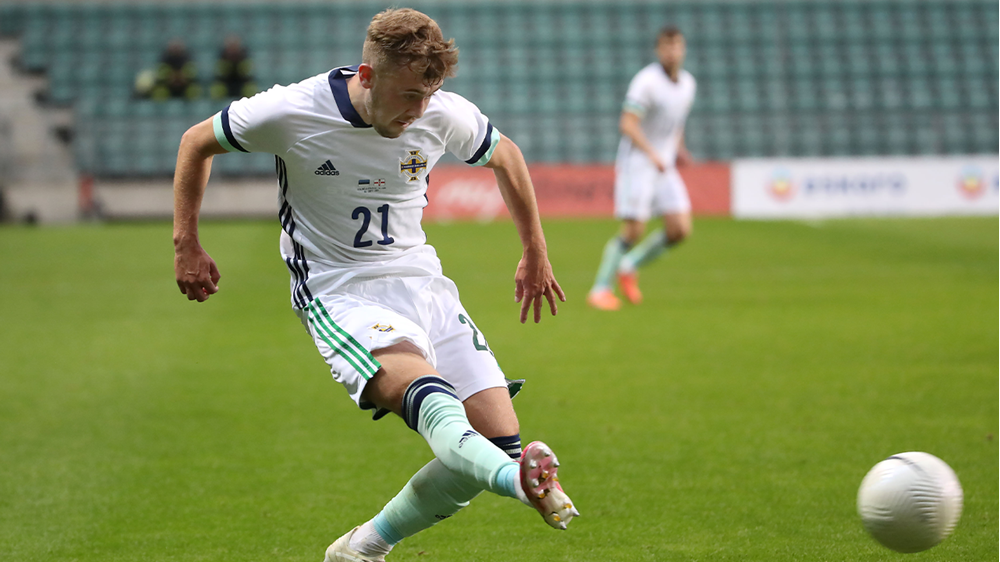 Northern Ireland under-21 international Alfie McCalmont chalked up his first goal of the season at the weekend as Morecambe fell to a 4-3 defeat to League One promotion hopefuls Wycombe Wanderers.

The 21-year-old midfielder, who is on a season-long loan with the Lancashire club from Leeds United, opened the scoring for the Shrimps after just four minutes, but the home side eventually claimed all three points with a winning goal deep into injury time.

McCalmont, who was in Ian Baraclough’s senior Northern Ireland squad last month, will this week link up with John Schofield’s under-21 panel for the EURO qualifiers away to Russia and Spain.

Meanwhile, Blackpool striker Shayne Lavery scored for the third successive game on Saturday, though his achievement was overshadowed after he had to be replaced midway through the first half of the Tangerines 2-1 success over Blackburn Rovers due to a hamstring injury.

Hearts striker Liam Boyce took his tally for the season to 10 when he converted from the spot as the Edinburgh side temporarily went top of the Scottish Premiership with a 2-0 victory over Motherwell at Tynecastle.

Ten minutes after the break the home side were awarded another penalty however this time Boyce saw his effort parried by the goalkeeper.

Striker Will Grigg made it two goals inside five days as he helped Rotherham United to a 2-0 away win at Cheltenham Town, a result which moves them into fourth spot in League One.

In the Premier League, Stuart Dallas was substituted 12 minutes from the end of their single goal victory against Watford because of injury while Jamal Lewis was once again an unused substitute for Newcastle United.

Elsewhere, George Saville, Daniel Ballard, Ciaron Brown, Jordan Thompson and Paddy McNair all got a full 90 minutes for their clubs ahead of the upcoming World Cup qualifiers, though Ali McCann’s first league start for Preston North end was cut short after he sustained an ankle injury.

In League One, Sunderland, who had Carl Winchester, Corry Evans and Tom Flanagan all in their starting XI, suffered a heavy 4-0 defeat in torrential rain to Portsmouth.

Striker Conor Washington was an unused substitute as Charlton Athletic won 2-1 at Fleetwood Town while Bailey Peacock-Farrell was in the Sheffield Wednesday team which conceded an injury-time goal that consigned them to a 2-1 home defeat by Oxford United.

Northern Ireland international Laura Rafferty scored her first goal of the season as Southampton Women maintained their 100% record with a 9-0 victory, their seventh in a row, over Keynsham Town in the FA National League.

Under-19 international Ross McCausland scored his fourth and skipper Kyle McClelland his first of the campaign  as Rangers ’B’ recorded a 6-1 win at Berwick Rangers.

Finally, under-21 central defender Daniel Finlayson made his debut for Kelty Hearts on Saturday after joining them on a season-long loan from Premiership outfit St Mirren.