Glentoran Women have their eyes firmly fixed on the treble ahead of tonight’s final of the Irish FA Women’s Challenge Cup sponsored by Electric Ireland.

And last Saturday they lifted a second trophy when defeating tonight’s opponents Crusaders Strikers - on penalties - in the final of the Toalsbet.com County Antrim FA Women’s Challenge Cup.

Crusaders Strikers, who finished third in the league this season behind the Glens and Cliftonville Ladies, will be keen to stop their cross-city rivals in their tracks, however. They have not picked up major silverware for nearly a decade and are hungry to get their hands on the premier cup for women’s teams in Northern Ireland.

The Glens, holders of the Irish FA Women’s Challenge Cup since 2018, came from behind to defeat main title rivals Cliftonville 2-1 to book their place in this year’s final, while the Strikers eased past Sion Swifts Ladies on the same scoreline.

In the matchday programme Glentoran Women head coach Stephen Murray says: “Our players have shown tremendous commitment, character and quality all season and in particular in the past two months with a heavy fixture schedule.

“Our squad is a mixture of youth and experience who play with no fear, and they now have the opportunity to showcase their talents once again on this prestigious occasion.”

Glentoran won the Toalsbet.com Co Antrim Women’s Challenge Cup 4-3 on penalties after scoring a late leveller against the Strikers.

It was a tight game – it ended 2-2 after regulation time – and Murray is expecting tonight’s encounter at the National Football Stadium at Windsor Park (7.45pm start) to be tough.

“Throughout the season Crusaders Strikers have been one of our toughest opponents. They are well organised and have proved difficult to beat. We know we have to work hard and battle to get anything from the games against them, as was evident in the cup final last weekend,” he added. 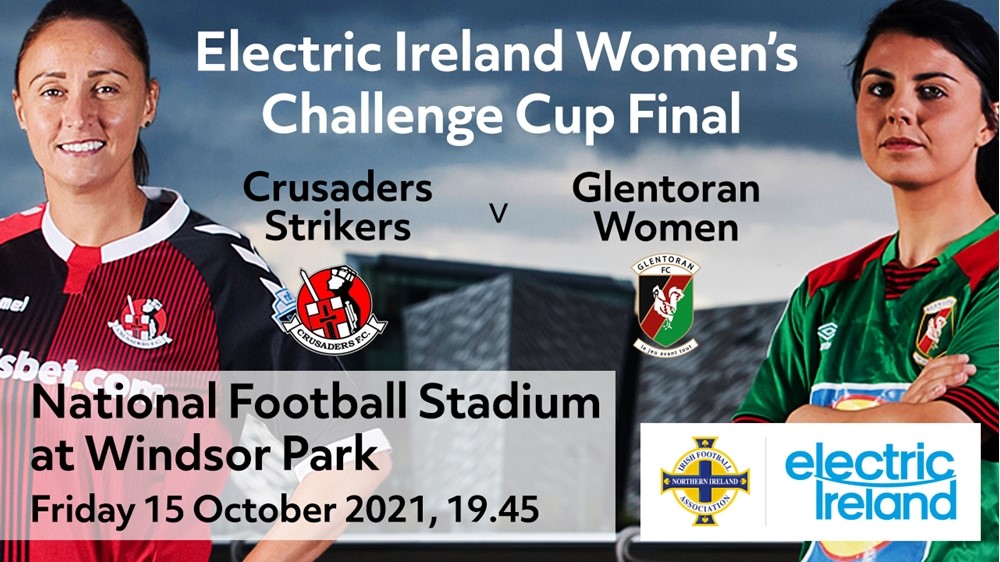 Crusaders Strikers boss Jonny Tuffey is adamant his side can win the EI trophy.

In the programme he points out: “Having taken on the manager’s job for the last 10 weeks or so I have been immensely proud of my players and their attitude, application and commitment to what’s been asked of them and how they have gone about their work.

“I thought we were excellent against Glentoran at Seaview on Saturday evening. It was a thoroughly entertaining game that we were unfortunate to lose.

“The Glens would no doubt love to complete a treble at the National Football Stadium at Windsor Park tonight, however we have regrouped and prepared well this week and we are very much looking forward to another massive game against the league champions.”

On paper the Glens have a slightly stronger squad. Alongside talented veteran Kelly Bailie, who has won numerous trophies and medals down the years, their ranks feature no less than seven members of the Northern Ireland senior women’s squad selected for World Cup qualifiers against England and Austria in the coming weeks.

However, the Crues also have their own stalwart in captain Julie Nelson, Northern Ireland’s most capped female footballer. Midfielder and ex-international Danielle McDowell is also an experienced operator, while up front they have young international striker Emily Wilson.

Meanwhile, tickets for tonight’s cup final are still available to purchase.They cost £6 for adults and £2 for juniors, and there is also an option to receive a 50% discount for group bookings of 10 or more. To purchase tickets please click here.