Northern Ireland’s senior women’s team will once again be the underdogs when they face Austria Women in a FIFA Women’s World Cup 2023 qualifier in Belfast tonight.

The Austrians are second seeds in European Qualifying Group D behind England, who defeated Kenny Shiels’ side 4-0 on Saturday.

And, like England, they have a 100% record so far in the group, with their latest success a 5-0 victory at home to Luxembourg on Friday night.

But Shiels believes his players can bounce back from their disappointment against the Lionesses at Wembley. 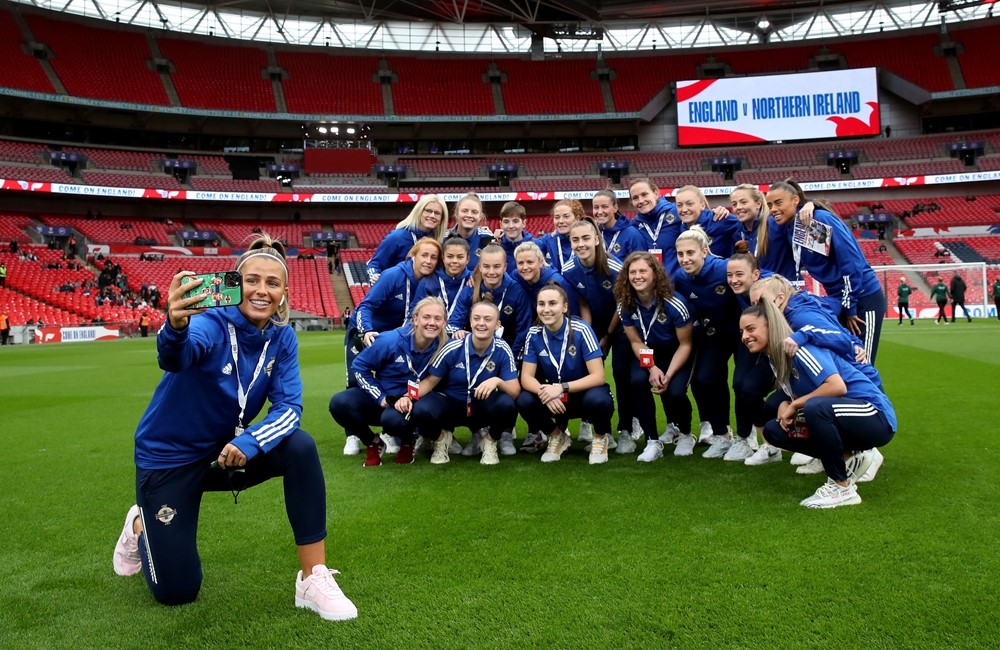 “We have a tremendous spirit and I believe we can upset our more illustrious opponents,” he said in the matchday programme for the qualifier at Seaview (7 o’clock kick-off).

The Austria squad is packed with full-time professional players who mainly operate in either the German or Austrian top flights (Frauen Bundesliga and Frauenliga), which are both strong leagues.

“We know it is going to be really tough, however if we get our gameplan right then I am confident we can get our World Cup qualification campaign back on track,” he insisted.

He also said that while he was proud of how his players defended against England he was disappointed with some technical aspects of the game.

“I felt our ball retention was poor at times and I thought we could have used the ball better. We will be doing everything we can to put that right against Austria,” he added.

Everton Women striker Simone Magill is back in the Northern Ireland squad after missing the game against the Lionesses due to a family bereavement, however she has not played so far this season so may be used sparingly.

Centurion Julie Nelson is struggling with a knock picked up at Wembley but otherwise Shiels has a full panel to choose from.

The Austrians have a spine featuring hugely experienced international players who all have 70 caps or more – and many of them were in the squad that reached the semi-finals of the Women’s Euros in 2017.

Another Eintracht midfielder, Laura Feiersinger, is in the 80 caps-plus bracket along with two others in the engine room, Sarah Puntigam of Montpellier Heraut (over 100 caps) and Sarah Zadrazil of Bayern Munich (over 80 caps).

But it’s up front where Shiels reckons they have their most dangerous player in Hoffenheim’s Nicole Billa, who is only 25 but already has 71 caps and 36 goals at international level under her belt.

Just like Northern Ireland there’s a sprinkling of talented younger players in their ranks as well, including 20-year-old midfielder Marie-Therese Hobinger, who plays for Turbine Potsdam in Germany, plus Hoffenheim defender Laura Wienroither (22) and her Hoffenheim team-mate Katharina Naschenweng (23), who can operate in defence, midfield or attack.

Billa scored twice against Luxembourg, while Puntigam and Naschenweng were also on target. Their other goal was scored by 30-year-old St Polten striker Stefanie Enzinger, who has made just over 20 appearances since making her debut in 2015.

Shiels believes if his side can show more quality on the ball than they did at Wembley then they can get a positive result tonight – and he also says playing in front of a full house at Seaview (over 2,300 spectators) could give them an edge.

🎟 Northern Ireland v Austria has now SOLD OUT 🙌🏻 See you all there! 💚🤍 #GAWA #GameChangersNI pic.twitter.com/1cJtzT1MIo