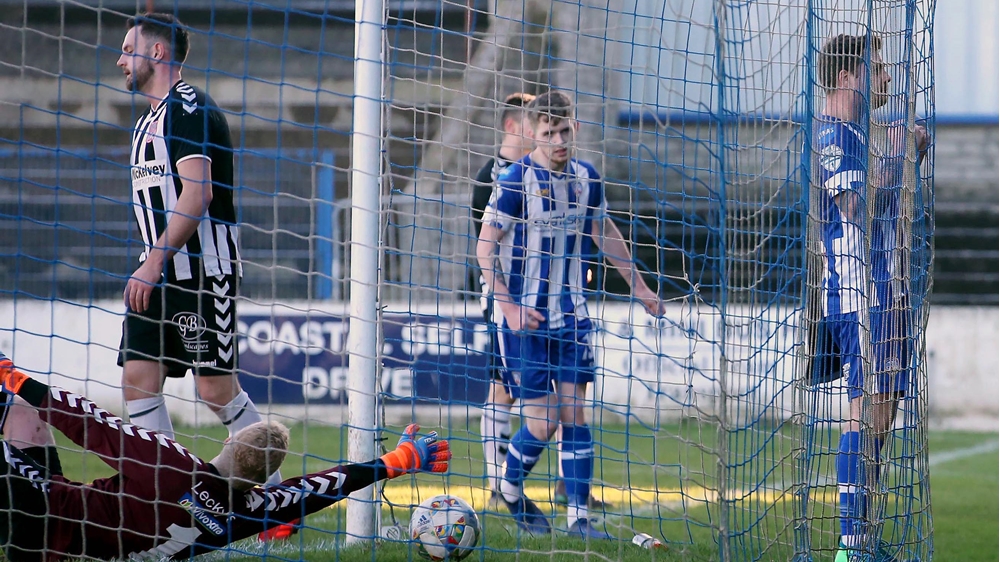 A repeat of one of last year’s Tennent’s Irish Cup semi-finals is the only confirmed quarter-final so far in this season’s competition.

Cup holders Coleraine and Championship leaders Larne were drawn to face each other in the last eight after they comfortably negotiated their sixth round ties this afternoon.

Only four of the eight round six games scheduled for today went ahead. Ties at Ballymena, Lurgan (Glenavon), Ballinamallard and Warrenpoint were called off due to frozen pitches.

Reigning Danske Bank Premiership champions Crusaders, who overcame league leaders Linfield after extra time at the National Football Stadium at Windsor Park, have been given a home fixture in the last eight. They will face the winners of the Ballymena United-Portadown round six tie.

Larne Tech Old Boys kept their cup dream alive with a fine win over Strabane Athletic in the early kick-off and their reward is another home tie, this time against the winners of Warrenpoint Town v Queen’s University.

Whoever comes out on top in the Glenavon-Dungannon Swifts sixth round match can also look forward to a home game next time around. They will face the winners of the Ballinamallard United-Carrick Rangers tie in the quarter-finals.

The last eight ties will be played on either 1 or 2 March, while the rearranged sixth round fixtures have been scheduled for Monday 11 February.

Larne Tech Old Boys, who play in Division 1A of the Amateur League, kicked off today’s excitement in the cup with a 3-1 win in the clash of the minnows.

The Old Boys defeated Northern Ireland Intermediate League outfit Strabane Athletic 3-1 at Dennis Harvey Park in Larne. Craig Todd grabbed two for the Larne side, while the prolific Paul Maguire, who has now scored 39 goals this season, grabbed the other. Aaron Patterson was on target for Strabane.

Both Coleraine and Larne saw off their opponents within 90 minutes. Cup holders Coleraine beat Championship side Dergview thanks to an early strike from Ben Doherty, a James McLaughlin effort and a debut goal from Dean Shiels. Larne eased past Amateur League Premier Division side Crumlin Star with a double from David McDaid and a Jeff Hughes opener. Joe McNeill scored for the visitors from north Belfast.

In last season’s semi-final Coleraine defeated Larne 3-1 but many are already predicting a much closer cup encounter in 2019.

The big cup clash of the day was won by Crusaders after extra time. A Jordan Owens thunderbolt put the Crues ahead in the extra period before Linfield levelled through debutant Marek Cervenka. However, Billy Joe Burns popped up with a second for the Crues to seal a quarter-final berth.