Northern Ireland’s Men’s Under-17s prepared for the 2019 U17 Euros qualifiers tonight at Stangmore Park, Dungannon in the first of two games against Greece.

The teams walked out to wet and windy conditions at Stangmore Park alongside a strong looking Greece side.

Greece had the better of the early chances with an offside effort ruled out after sharp link-up play between Shani Ronaldo and Christos Tzolis.

The Greek number 9, Ronaldo, broke free in Northern Ireland’s box after a superb through ball but the ball was well collected by Dermot Mee.

As Northern Ireland continued to play good football on the floor, Jack Scott showed glimpses of promising attacks with several runs up the right wing, but was dealt with by the physical Greek defence.

Before the half-hour mark the referee awarded Greece a penalty after a sliding challenge from Sean Stewart. The Greek number 10 Christos Tzolis made sure he hit the back of the net.

Dylan Boyle sliced through the Greek defence with a through ball into Chris McKee, however it was eventually collected by Balomenos.

The first yellow card of the game was picked up by the Greek number 14, Aventisian, after a heavy sliding tackle on Darragh Burns.

Going into half-time the best of Northern Ireland’s chances had been from set-pieces but didn’t really trouble the Greek net from two free-kicks in dangerous areas.

Stephen Frail’s side had the worst possible start to the half as Karakoutis scored for Greece from a rebounded save to go 2-0 up.

Northern Ireland almost had the perfect reply after some great work from Chris McKee sent a cross inches away from the head of Mackenzie O’Neill.

A well worked free-kick unleashed Darragh Burns up the left wing and he whipped in a perfectly placed cross onto the head of Chris McKee who fired the ball into the Greek net to make it 2-1.

Greek captain, Aslanidis picked up a yellow card for a hard tackle in the difficult conditions before Dylan Boyle was cautioned after a challenge from behind stopped a Greek counter attack.

Greece made it 3-1 on the hour mark as Christos Liatsos slotted the ball past Dermot Mee.

Mackenzie O’Neill showed quick feet in the Greek box with a dangerous move and was eventually brought down with no foul given.

Barry Baggley looked lively off the bench for Northern Ireland and had two decent crosses into the Greek box collected by Balomenos.

A flurry of late attacks from Northern Ireland included Euan Deveney hitting a fierce shot over the bar in the final minutes after clever work from Barry Baggley who cut the ball back to him outside box.

The next game against Greece will take place at Shamrock Park in Portadown on Thursday 21 February (1pm kick-off).

Next month’s elite round of 2019 U17 Euros qualifiers is being staged in Den Haag (The Hague) in the Netherlands. In the mini tournament Frail’s side will be facing the Dutch, Czech Republic and Israel.

You can look through a gallery of images from the game below. 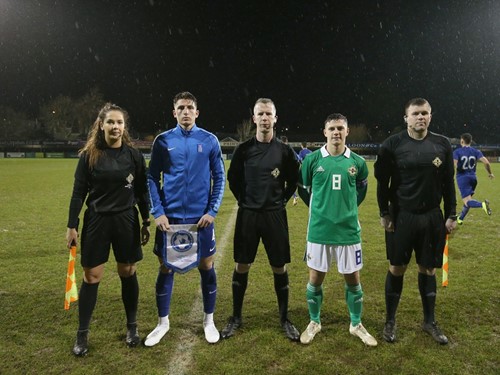 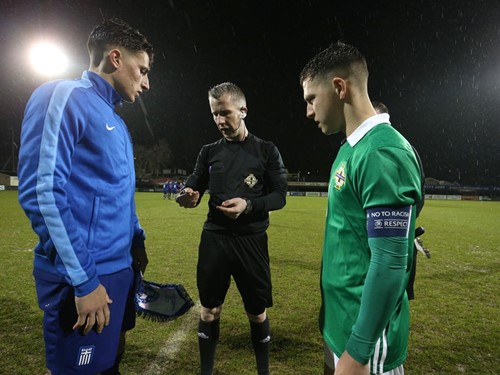 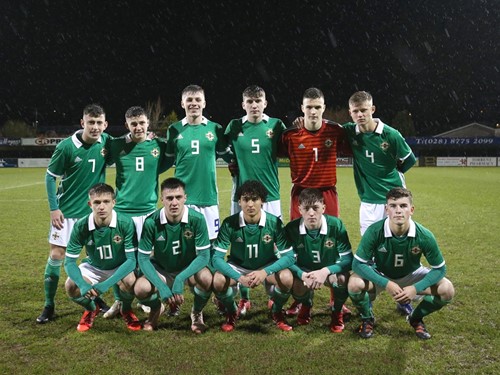 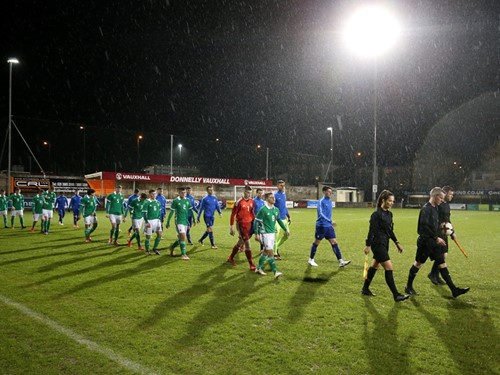 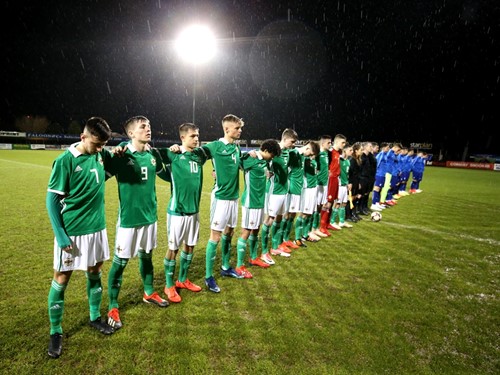 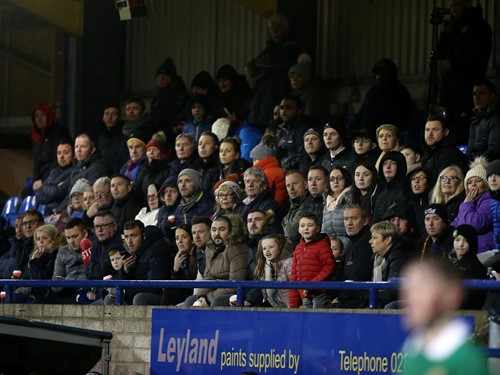 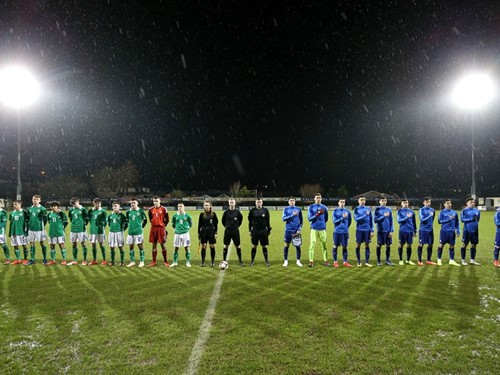 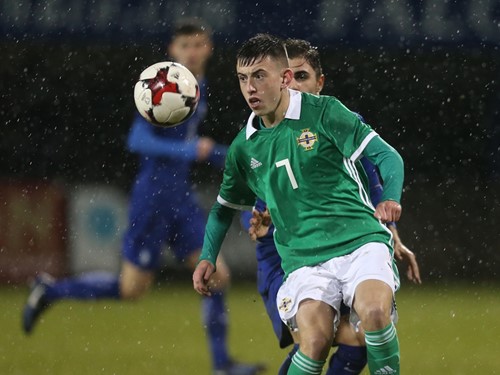 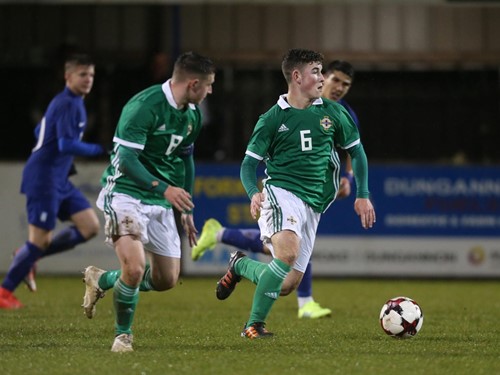 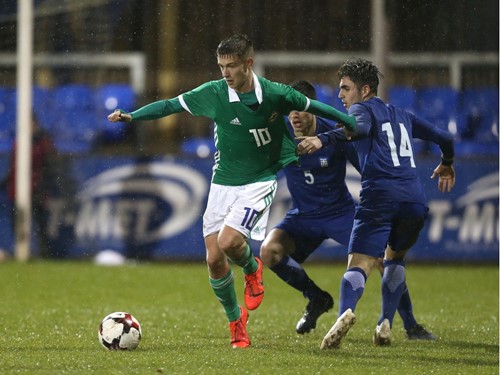 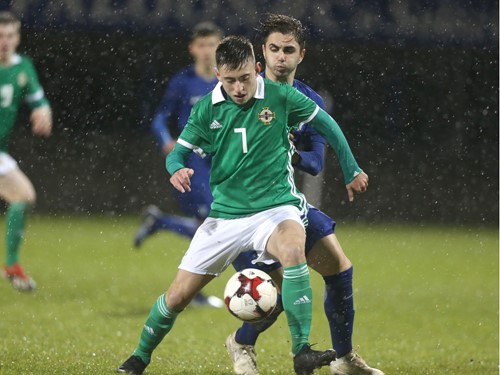 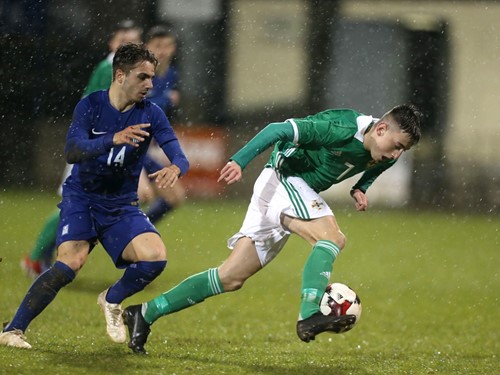 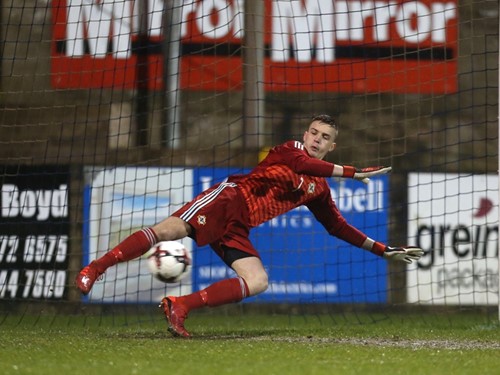 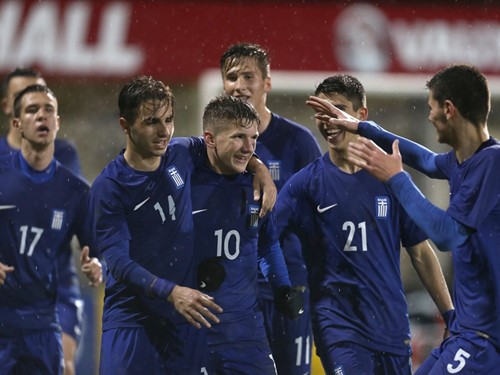 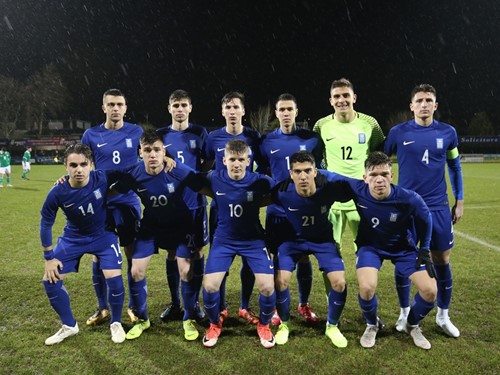 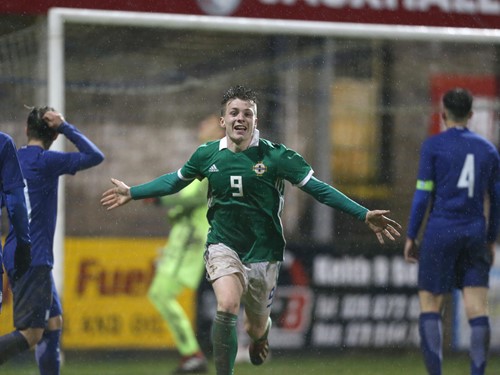