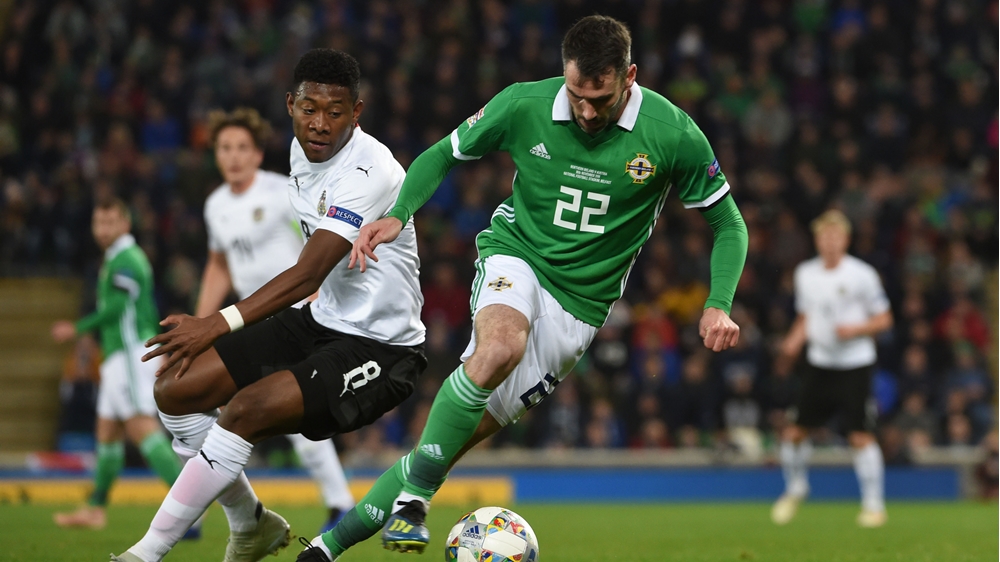 Hearts defender Michael Smith could be ruled out for up to 12 weeks after tearing his thigh muscle in the Jambos’ 4-0 Scottish Cup victory over non-league outfit Auchinleck Talbot yesterday.

The 30-year-old right-back had to leave the field with the injury on 78 minutes and is now a possible doubt for Northern Ireland’s EURO 2020 fixtures at home to Belarus and Estonia in March.

Hearts boss Craig Levein said: “It’s the one big downside. He was as professional as ever in his performance today and he's torn his thigh muscle unfortunately.

“Michael has been an ever-present and he brings a real calmness to the team.

“He’s getting a scan tomorrow (Monday), so we’ll wait for the result, but unfortunately it could be anything between six and 12 weeks.”

Elsewhere in the Scottish Cup, Niall McGinn scored two minutes after coming off the bench at half-time in Aberdeen’s 4-1 homes success over Queen of the South.

The former Dungannon Swifts and Celtic winger, who also provided an assist for the home side’s third goal, admitted after the game he was disappointed not to have started the fifth round clash against the Scottish Championship outfit.

“I was of course disappointed not to be playing,” said McGinn, who now has four goals for the season, “It just shows that competition for places is strong and it’s down to the manager to pick his team for each game.

“I’m delighted to have come on and made an impact and hopefully I’m in with a chance of the league game next week.”

Meanwhile, Rangers’ duo Kyle Lafferty and Steven Davis were used as late substitutes in the scoreless fifth round contest at Rugby Park against Kilmarnock for whom Jordan Jones played the full 90 minutes.

In the Premiers League, Craig Cathcart helped Watford to a 1-0 home win over Everton at Vicarage Road while Jonny Evans was part of an unlucky Leicester City side which went down 3-1 to Spurs at Wembley.

In England, midfielder Ben Reeves headed home his third of the season for Charlton Athletic to salvage a point in the 1-1 draw with Southend United at The Valley.

Also in League One Will Grigg recovered from an ankle injury to make his debut for Sunderland following his £4 million switch from Wigan Athletic last month.

However, he failed to mark his first appearance for the Black Cats with a goal as they remained in fourth spot in the table after being held to a 1-1 draw at Oxford United who had Gavin Whyte starting and Mark Sykes on the bench.

Right-back Ryan McLaughlin made his third start for Rochdale since his move from Blackpool, but manager Keith Hill still believes the 24-year-old needs to build on his fitness after coming off seven minutes from the end of their 1-0 home defeat to Coventry City.

“We’ve again had to bring Ryan off in the latter stages of the game,” stated Hill. “He had cramp, so we’ve got to get him up to speed.

“He has played the best part of three games now so I’m expecting him, over the course of the next week / 10 days, to be better prepared for the AFC Wimbledon game.”

Finally, Liam Boyce chalked up his seventh assist of the campaign when he laid the ball off to David Templeton for Burton Albion’s second goal in the 2-0 victory over bottom of the table AFC Wimbledon.