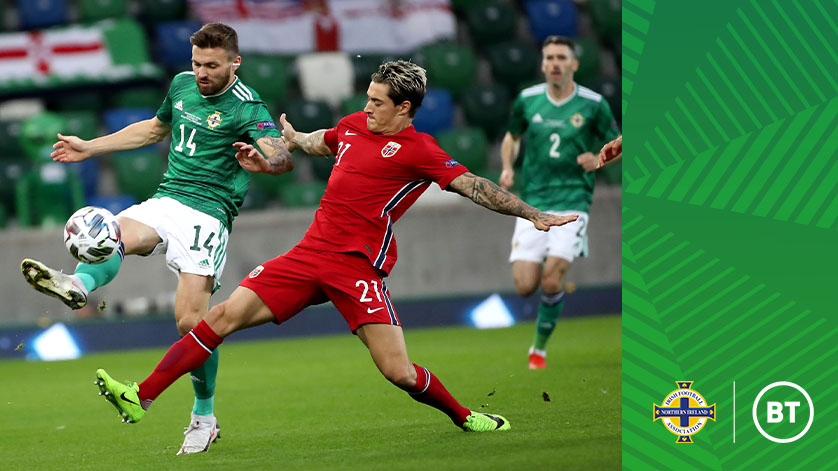 Stuart Dallas insists there’s a hunger in the Northern Ireland squad to get the job done in Bosnia and Herzegovina later this week.

The versatile defender/midfielder said there is huge belief in the ranks as they prepare to face the Bosnians in the UEFA Euro 2020 Path B Play-Off semi-final in Sarajevo.

He revealed everyone in the squad realises the magnitude of the encounter, which is arguably the biggest game for the boys in green and white since the 2018 World Cup play-off defeat to Switzerland.

Ian Baraclough’s team go in to the play-off match against the Bosnians at the Grbavica Stadium on Thursday as underdogs.

However, Dallas pointed out: “It’s a one-off game over 90 minutes, or longer if needs be, but it’s a game that we will be prepared for. Hopefully everybody is fit for it. It’s one where you will have to give your all for 90 minutes and hope that’s enough.”

Although Northern Ireland lost home and away to the Bosnians in the Nations League back in 2018, they did create chances in both games – and that gives Northern Ireland hope, according to the full-back.

“We know that we can compete with them, but we know how hard it’s going to be. It’s not going to be easy,” he said.

“But it’s a play-off. This is a huge game and these are the games you want to be playing in. We need to bounce back after the last result we had (the heavy defeat to Norway in the Nations League) and it’s a game we are looking forward to.”

He also believes Bosnia allowing some of their fans into the stadium will put pressure on them to perform.

Dallas added: “To be potentially two games away from another major tournament is huge. We want to get there. There’s a hunger and belief within the squad that we are capable of doing that.

“We can’t look that far forward. We’ve got this huge game and if we can get through that obviously we have a final here (in Belfast) and it could end up being a nice spectacle.”

If Northern Ireland defeat the Bosnians on Thursday they will play the winners of the other Path B last four game – Slovakia v Republic of Ireland – in the final at the National Football Stadium at Windsor Park on 12 November.