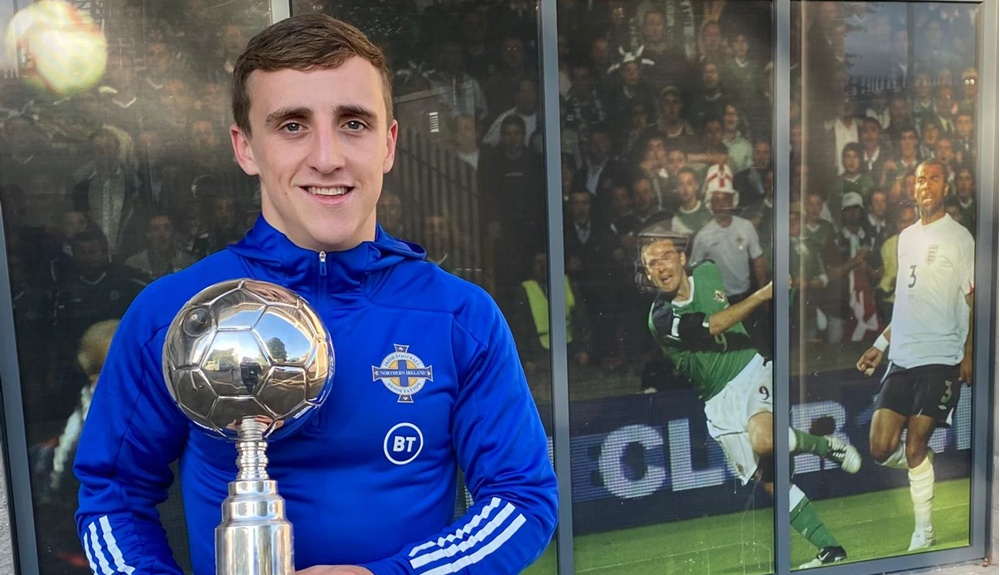 Joel Cooper has a full senior international cap in his sights after picking up another trophy.

He has been recognised by the Northern Ireland Football Writers’ Association for his performances with Linfield as they won the Danske Bank Premiership in the 2019-20 season.

Cooper, who trained with the Northern Ireland squad at Euro 2016 and has been included in the last two senior squads by Ian Baraclough, said making his first senior international appearance with Northern Ireland would cap a great year for him.

The Football Writers’ player of the year prize, presented remotely this year due to Covid-19 restrictions, comes just a couple of months after the 24-year-old fulfilled his dream of being a full-time professional player in England by joining EFL League One side Oxford United from the Blues.

“It’s a bit of a surprise to me to get this award. I wasn’t expecting to get a call about it, but I am delighted,” the lively winger said.

“Some great players have won it in the past. Jimmy Callacher won it last year and it’s great to keep it at Linfield for another year.

“It’s good to win both the young player and the senior award. It wasn’t a bad time for me at Linfield. Two league titles and a player of the year award is something I’m very pleased about.”

Cooper admitted that next on his list of targets will be to join the four most recent double winners by adding a full international cap to his achievements.

“It’s been a crazy few months for me and while 2020 probably hasn’t been a great year for a lot of people it’s been brilliant for me,” he said.

“I was disappointed that I didn’t get to play again for Linfield. I didn’t know at the time in March that was going to be my last game for the club.

“When I got the call from Oxford everything happened within a couple of days and it’s been a great couple of months. Getting the call-up to the senior international squad is something that I wasn’t expecting, but I’m honoured to be a part of it.”