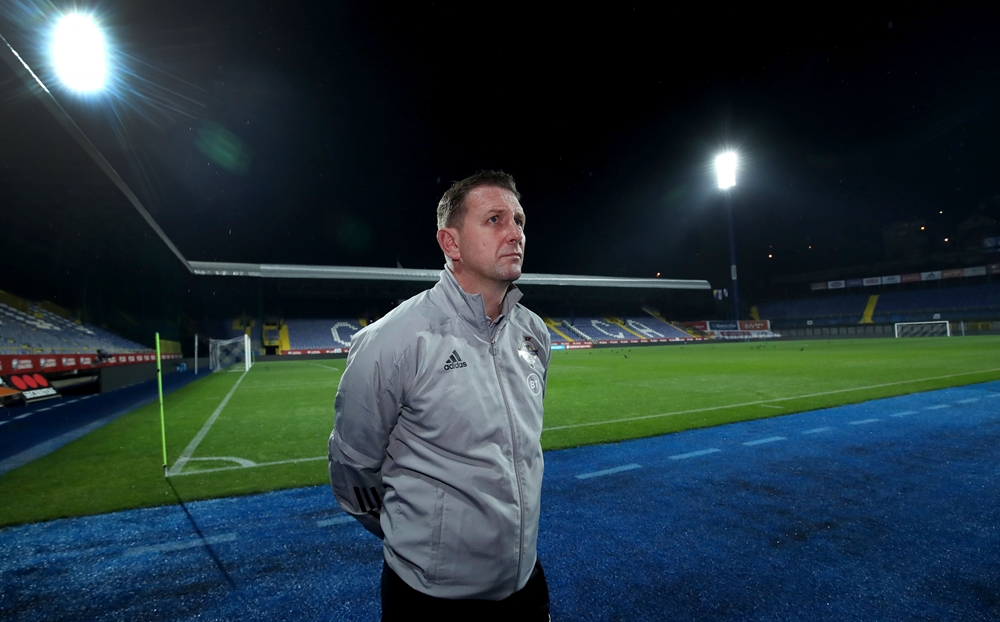 Northern Ireland manager Ian Baraclough has promised his team will give it their all in tonight’s UEFA Euro 2020 play-off match against Bosnia and Herzegovina.

He insists his players have “no fear” and are “fully focused” as they prepare to face the Bosnians in the Path B Play-Off semi-final in Sarajevo (7.45 start UK time).

At a press conference in the Grbavica Stadium last night the Northern Ireland boss said he respected the opposition but insisted his team are “up for the battle” for a place in next month’s Path B decider.

Bosnian media implied Northern Ireland were very much the underdogs with a panel of players operating at a lower level than the bulk of the Bosnian squad.

“They’ve put themselves down as firm favourites. We’re comfortable if they underestimate us,” Baraclough said afterwards.

There’s a clean bill of health in the squad ahead of the match at the Grbavica - around 2,000 Bosnian fans are being allowed in to the game at the 13,000-capacity stadium - and the Northern Ireland boss is expected to field a tried and trusted starting eleven, many of whom either experienced Euro 2016 or the World Cup 2018 play-off against Switzerland.

They will be led once again by their on-field conductor Steven Davis, who is set to break legendary goalkeeper Pat Jennings’ caps record for Northern Ireland. They both currently have 119 caps.

The Bosnians, coached by Dusan Bajevic, have two star names in midfielder Miralem Pjanic, who moved to Barcelona from Juventus earlier this year, and prolific Roma striker Edin Dzeko.

Also in their ranks are the highly rated Istanbul Basaksehir winger Edin Visca and the Torino attacking midfielder Amer Gojak.

But they are without several key defenders due to injury, including Ermin Bicakcic (Hoffenheim), Zoran Kvrzic (Kayserispor) and Eldar Civic (Ferencvaros), while experienced defender Toni Sunjic, who plays his club football in China, has not been allowed to travel home for the match due to Covid restrictions.

Miraslav Stevanovic, a winger with Servette in Switzerland, is also out injured and there are doubts over another defender, centre back Ervan Zukanovic (Fatih Karagumruck).

There have been wholesale changes in the Bosnian squad since the teams played against each other in the UEFA Nations League back in 2018, when the Bosnians prevailed home and away.

Northern Ireland’s core has changed little since then, however, and that extra bit of experience and the nous of battle-hardened players might just tip the balance in the boys in green and white’s favour.

If Northern Ireland defeat the Bosnians tonight they will play the winners of the other Path B last four game – Slovakia v Republic of Ireland – in the final in Belfast on 12 November.