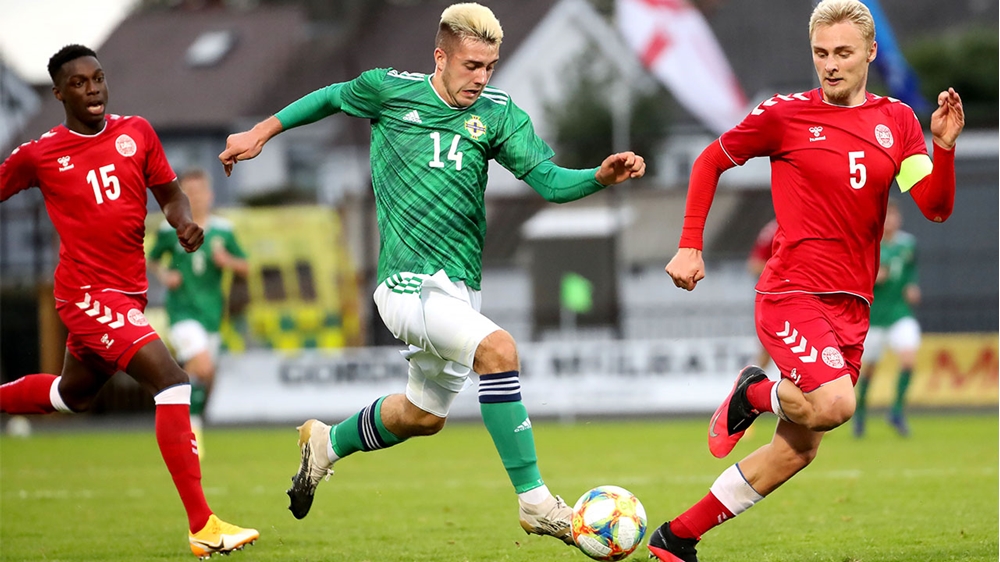 Northern Ireland’s Under-21s will be looking to put some more points on the board when they play Finland in Ballymena this evening.

Andy Crosby’s side can no longer qualify for the U21 European Championship Finals in 2021, however they can finish as high as third in Qualifying Group 8 if they defeat the Finns at home and Ukraine home and away over the next month or so.

Northern Ireland are currently sitting fifth in the group with six points from seven qualifiers.

Both Finland and Ukraine, whom they face at Ballymena Showgrounds next week, lie a point ahead of them. The Finns have played the same number of games as Crosby’s team, while Ukraine have played a game less.

Northern Ireland drew 1-1 with Finland away in September 2019, when Ian Baraclough was in charge. It was a tight encounter in which both sides created and wasted good opportunities.

U21s caretaker boss Crosby has a strong panel to choose from this time around and he will be urging his team to be more clinical in front of goal when they line out for the U21 Euro qualifier at Ballymena Showgrounds (6 o’clock start behind closed doors).

If Northern Ireland manage to beat Finland and Ukraine fail to defeat Romania at home in today’s early kick-off in Group 8 then Crosby’s charges will move into third place in the table.

In their seven U21 Euro 2021 qualifiers to date the boys in green and white have registered one victory, three draws and suffered defeats home and away to Denmark U21s and a defeat away against Romania U21s. The Danes currently top the table (19 points from seven matches), while the Romanians (16 points from seven) are in second place in Group 8.

After the encounter against the Finns this evening Northern Ireland’s final two games in the qualifying campaign will see them take on the Ukrainians in Ballymena next Tuesday (13 October, 6pm start) and then away in Kovalivka on 17 November.

Linfield striker Shayne Lavery and Brighton striker Ben Wilson have both had to pull out of the squad due to injury. They have been replaced by Larne winger Andrew Scott and Doncaster Rovers midfielder Liam Ravenhill. It’s the first time both players have been called up to the U21s.