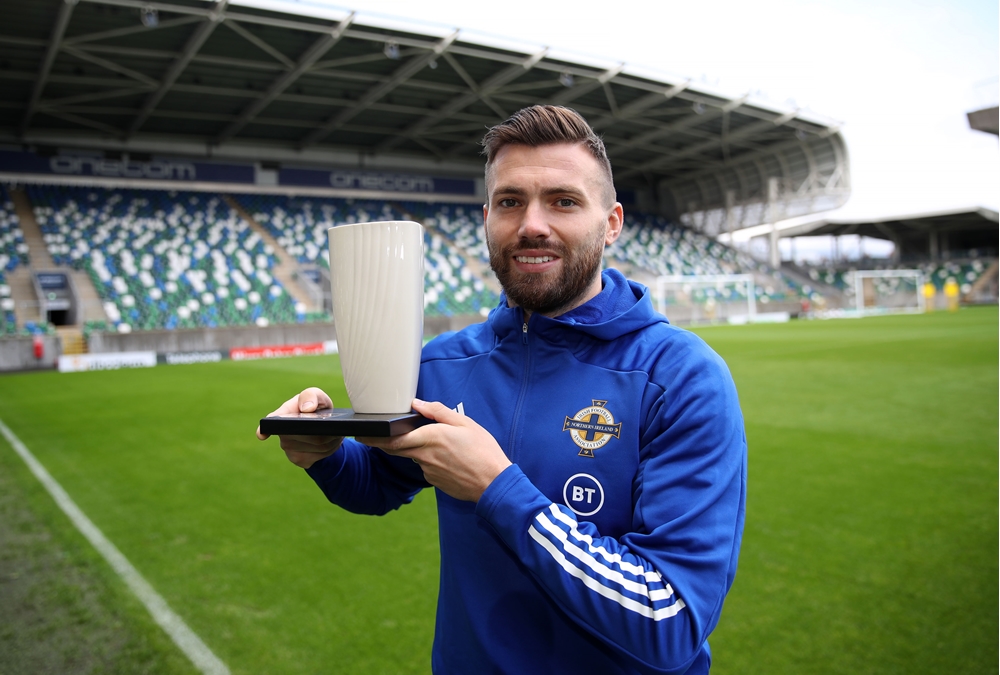 Stuart Dallas has won the International Personality of the Year Award from the Northern Ireland Football Writers’ Association.

The versatile defender/midfielder picked up the award after putting in some fine performances for his country in the early part of the 2019-20 season.

Although the coronavirus pandemic meant that Northern Ireland played just six times last season, with first the Euro 2020 play-offs and then the finals themselves postponed, Dallas was highly impressive throughout and that won him the vote of the writers – and the special Belleek Pottery trophy.

At club level the former Crusaders winger enjoyed a stellar campaign as a key member of the Leeds United team that gained promotion to the Premier League and he is now showing his ability while mixing with some of the best talents in the world in England’s top flight.

With the award comes a place in history for the 29-year-old Cookstown-born star. Having claimed a double awards success when he was named both Player of the Year and Young Player of the Year in Northern Ireland back in 2011, Dallas becomes the first player to make it a hat-trick by adding the international personality honour to those prizes.

“I’m very proud to be selected for this award,” said Dallas.

“When I look back to my time in the Irish League the time has passed by so quickly, but a lot of things have happened throughout my career since then. I’ve enjoyed every minute of it and hopefully it is still progressing.

“Over the last year or two I think my game has come on a lot, especially since Marcelo Bielsa arrived at Leeds. Certainly over the last year I feel as if I’ve been playing the best football of my career.

As well as his undoubted talent showing through, Dallas has displayed impressive versatility, slotting into defensive and midfield positions on both the right and left sides for club as well as country, which have made him an asset to both squads.

“At times versatility can work against you because you don’t get a settled position,” said Dallas.

“You want to play in a position where you know you’re going to play week in, week out and make that position your own, but for me it’s actually worked for me because I am able to play in so many positions.

“When we played the Netherlands at home Michael O’Neill had me in three or four different positions during the 90 minutes and I suppose it just comes easy for me to adapt to it because of the work that Marcelo Bielsa has helped me with at Leeds.

“It’s something that I enjoy doing as well and it’s good to have that.”