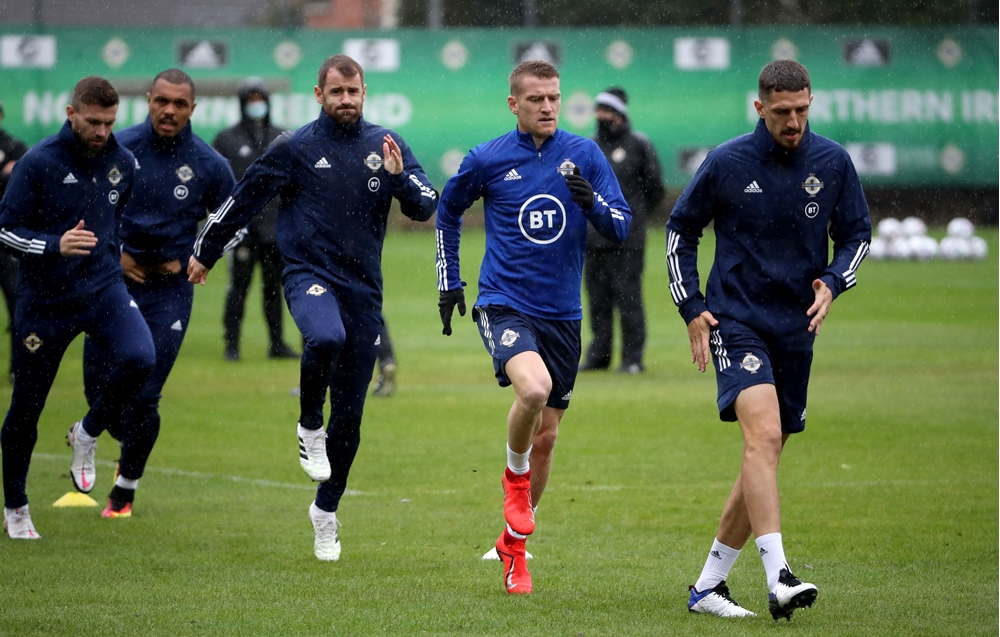 Northern Ireland boss Ian Baraclough says his squad are fully focused on the task ahead as they prepare for this week’s UEFA Euro 2020 play-off match against Bosnia and Herzegovina.

Following his 26-strong squad’s first training session of the week, the manager said there were “no major issues” injury-wise, just the normal bumps and bruises you would expect following weekend matches.

He said experienced defender Jonny Evans, who took “a bit of a knock” in Leicester City’s Premier League game against West Ham United yesterday, had reported for training this morning and was “OK”.

“Hopefully everyone will be there on Thursday to choose from,” he noted as he looked forward to the Path B Play-Off semi-final in Sarajevo.

And he revealed: “There’s a definite focus on making sure we are in the final come next month to give ourselves a chance to get to the Euros.

“Players want to be there. Players want to experience the feeling of being at a competition that is renowned world-wide now and being on the biggest stage, so there’s no bigger incentive.”

The Northern Ireland squad are currently preparing for a triple header. After the Path B Play-Off last four game in Sarajevo on Thursday they have UEFA Nations League matches against Austria in Belfast on Sunday (11 October) and Norway in Oslo next Wednesday (14 October).

If Northern Ireland defeat the Bosnians this week they will play the winners of the other Path B last four game – Slovakia v Republic of Ireland – in the final in Belfast on 12 November.

Meanwhile, Ian Baraclough also praised Steven Davis, who is about to break legendary goalkeeper Pat Jennings’ caps record for Northern Ireland. They both currently have 119 caps.

He said the captain would be getting stuck into training and concentrating on the Play-Off semi-final “as expected”.

“He does the things right leading up to a game. We’re fortunate that he took a rest on Sunday for Rangers. It’s allowed him to have a really good run-up to the game and I expect him to lead the team out,” he added.

The manager also joked that he might bring some rain from Northern Ireland to Bosnia and Herzegovina.

With the rain lashing down as the team trained in Belfast, he quipped: “I don’t mind this (the rain). This keeps it slick. It makes sure the ball moves quickly and the lads run around and keep warm. We’re used to this weather. Let’s bring it across with us.”