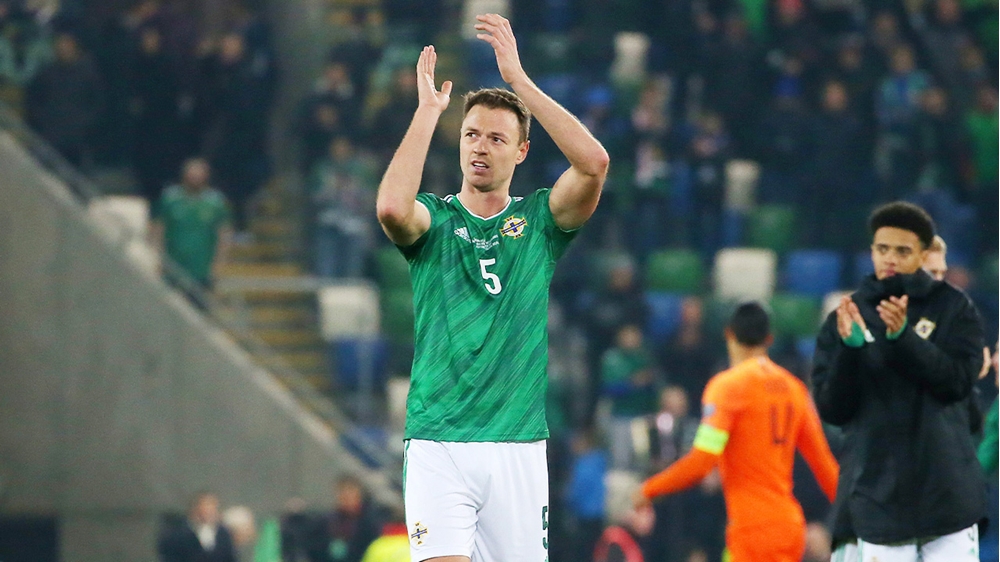 The 32-year-old central defender, who has missed Northern Ireland’s last two internationals with injury, recovered from the thigh strain he picked up at Manchester City last week to play in the Foxes surprise 3-0 home defeat to West Ham United in the Premier League yesterday.

Elsewhere in the top flight, left-back Jamal Lewis was part of the Newcastle United team that defeated Burnley 3-1 at St James’ Park while Stuart Dallas produced another exceptional display as Leeds United played out an enthralling 1-1 draw at home to Pep Guardiola’s Manchester City.

In the Championship, Jordan Thompson remained on the substitute’s bench as Stoke City salvaged a late draw at home to Birmingham City while George Saville chalked up his first assist of the season as Middlesbrough secured their first league win of the season with a 2-1 victory over Barnsley.

Sunderland defender Tom Flanagan received a red card after 73 minutes for a foul on his international colleague Conor Washington as the Black Cats left Charlton Athletic with a point following their goalless draw at the Valley.

Midfielder Steven Davis, who is on-course to become Northern Ireland’s record cap holder on Thursday, was used as a late substitute in Rangers 2-0 success at Ibrox over Ross County in the Scottish Premiership, though manager Steven Gerard did keep faith with winger Jordan Jones giving him his second successive league start.

Newcomer to the Northern Ireland senior panel, Alistair McCann, played the full game for St Johnstone who conceded two late goals at home to Celtic while Niall McGinn was substituted in the second-half of Aberdeen’s home win over St Mirren.

On the goalscoring front, Matty Lund recorded his first league goal of the season in Rochdale’s League One win at home to Fleetwood Town while striker Caolan Lavery also registered his first of the campaign as Walsall clinched a point at Forest Green Rovers in League Two.

On-loan striker David Parkhouse, who has been named in Andy Crosby’s under-21 squad, made his debut for Hartlepool United who opened their National League campaign with a 2-1 victory over Aldershot.

After scoring in Everton Women’s FA Cup semi-final in midweek Simone Magill was an unused sub as her team-mates crushed Aston Villa 6-0 in the Women’s Super League on Saturday.

Meanwhile in the Championship, Rachel Furness was in the Liverpool Women’s side that moved to the top of the table following their 2-1 win at Coventry United while Sarah Robson started for Durham Women who are now in second spot after drawing 2-2 at Leicester City.

Finally, former Northern Ireland international Jamie Ward marked his debut for Solihull Moors with a goal after converting a first-half penalty, however, it was not enough to prevent the Midlands outfit from going down 2-1 in their National League opener at Woking.