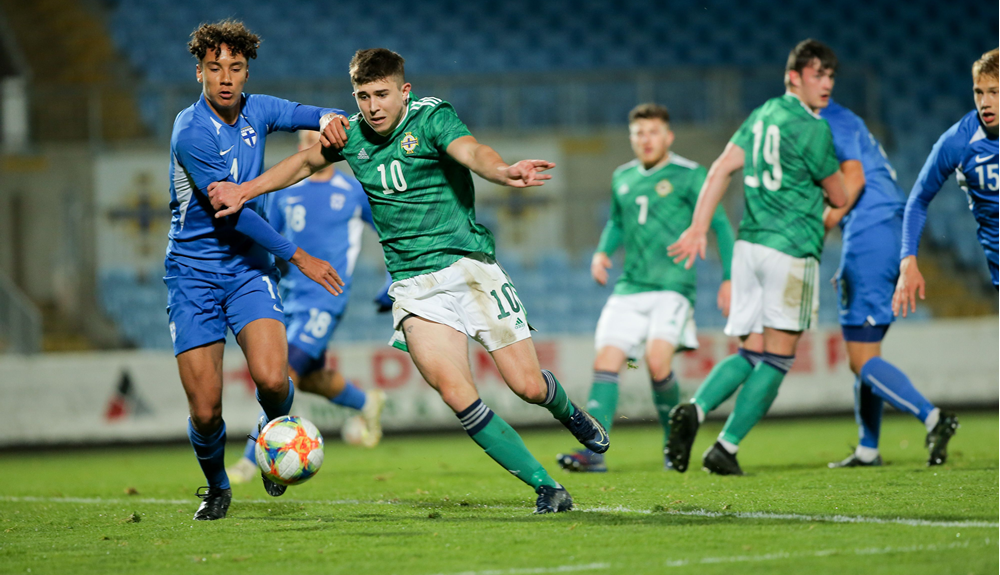 Under-21s striker Paul O’Neill has been named as young player of the year in Northern Ireland.

O’Neill, who has scored three goals in his last two appearances for Northern Ireland U21s, picked up the accolade from the Northern Ireland Football Writers’ Association for his performances with Glentoran during the 2019-20 season.

Last week a superb overhead kick from O’Neill fired Northern Ireland’s Under-21s to a fine 1-0 victory against Ukraine U21s in Ballymena. And the previous week he scored twice for the U21s against Finland in a 3-2 defeat at Ballymena.

The young striker has set his sights on following in the footsteps of three of his recent predecessors after picking up the Football Writers’ young player award sponsored by Dream Spanish Homes.

The 20-year-old, who lit up this year’s Irish Cup final when he scored a stunning goal to give the Glens a first half lead against Ballymena United, has seen his career go on a sharp upward protectory in a short space of time and he’s not finished yet.

Next on his list of targets is to follow 2016, 2017 and 2018 winners Joel Cooper, Paul Smyth and Gavin Whyte by securing a dream move into cross-channel football.

“It’s brilliant to get this award after the first season when I’ve played regularly,” he said.

“I started most games and scored a few goals – and I’m over the moon to get the award.

“Trying to get across the water is still my main ambition. There was a bit of interest and if I can keep doing what I’m doing and scoring goals then hopefully it will come about for me.”

For now O’Neill remains an important part of Mick McDermott’s squad at The Oval as the Glens target more silverware in 2020-21.

After a summer which has seen a large number of new arrivals in east Belfast O’Neill will face a challenge to keep his place and he will also have to contend with the pressure of a major push to bring the league title back to the club for the first time since 2009. However, he is relishing both challenges.

“We’ve brought in a lot of new players, eight new signings, and we will be pushing for the league. We’ll at least be up there challenging with a big strong squad. We’ve two good players for every position and we’ll be going all out to challenge for the title,” he promised.

O’Neill featured for the Glens at Solitude on Saturday as they lost their Danske Bank Premiership opener against Cliftonville by a goal to nil.