Listed: Every NI Fan of the Month throughout 2018 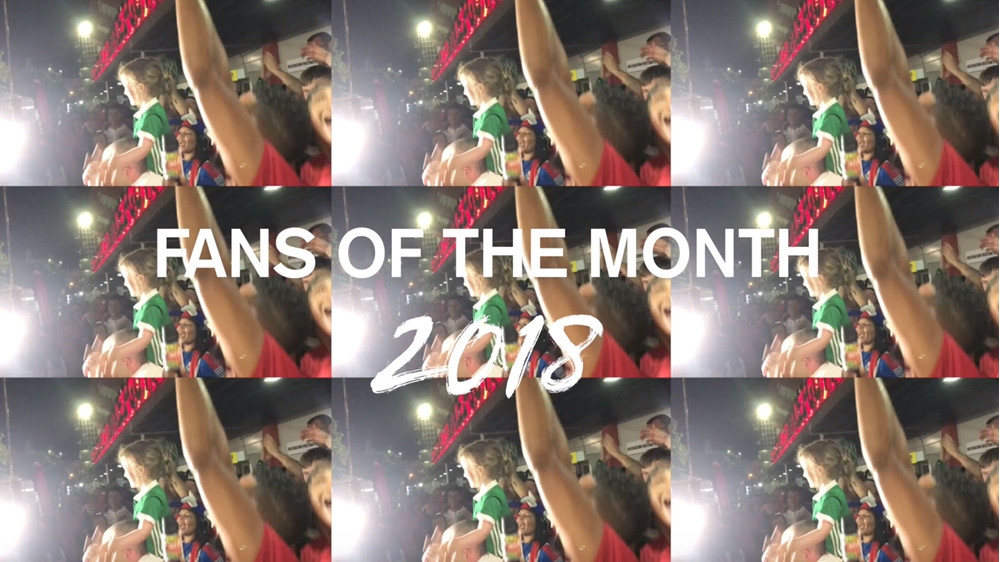 You, the fans, have backed Northern Ireland to the hilt again this year and here we highlight the supporters who we showcased in our Fan of the Month feature throughout 2018.

The four-man ‘Home To Portrush’ team - consisting of Ally Cooper, George McAlpin, Gareth Barton and Luke Baker - were naturally elated after their efforts in the world's toughest rowing race.

Three massive Northern Ireland fans have entered a competition to have Red Bull fly their team across Europe in green and white!

The February Fans of the Month saw three members of the GAWA asking for your vote to send them on a trip around Europe as they promised to do it dressed in Northern Ireland's colours.

If selected, Red Bull would fly their team to a certain destination in Europe giving our boys only 24 cans of Redbull to use as their only currency.

Team member Scott Gault said: "I've been going to Northern Ireland games from I was no age, through the lows and all the highs from recent years."

And fellow team member Andy McCalmont added: "I got my first Northern Ireland shirt when I was just a baby. Since then I've been attending Northern Ireland matches at Windsor with my dad, experiencing the good days and the bad. There's not a country I'd rather be from and we have the best support in the world."

March's Fans of the Month, Richard McFerran and Joel Adair, scaled Mount Everest in a bid to raise money for a charity close to their hearts.

Explaining their valiant efforts, Richard explained: "It came about as an idea to help raise money and awareness for Macmillan Cancer Care. They were outstanding in looking after my mum who sadly passed away last June, so it was a great opportunity to say thank you to them.

"The trek was extremely challenging at times but we made it to Everest Base Camp on 26 March, not long after finding out the excellent result against South Korea!"

Arnie McCalister, a friend of the duo, nominated the pair for Fans of the Month: "Despite his mum's illness, Richard has only missed one game in the last two campaigns and rebooked Azerbaijan to travel the day after his mum's funeral on the insistence of his dad, Jim, who is a block booker.

"I know Richard took great comfort from the support he received from the London NISC and the GAWA in general during the course of his mum's illness. The London NISC are rightly proud of both Joel and Richard, as I'm sure the GAWA are in general, and it is yet another example of Northern Ireland fans supporting each other in circumstances outside of the beautiful game."

Gareth McAuley hit 45 out of his 50 targets in the men's skeet at the 2018 Commonwealth Games on the Gold Coast to claim a bronze medal for Northern Ireland.

Not only is Gareth a bronze medallist for his country, he's also a massive Northern Ireland football fan.

He said: "It was great to have a strong contingent of Northern Ireland fans at the shooting venue. Every time my name was being called out, you knew where the NI fans were from their cheering."

Team NI won 12 medals at the Commonwealth Games including a gold from Rhys McClenaghan in the men’s pommel-horse. Gareth McAuley had to fight off stiff competition in a superb effort in the men's skeet.

Five-year-old Megan Lewis travelled across the world with her parents to join the Green and White Army in Panama and Costa Rica for our summer tour of Central America.

It was a fantastic effort for all fans who made the immense journey to Central America at the end of May, but for P1 pupil Megan, who did it while stealing the hearts of the GAWA and locals alike, it was really something special.

"She has made friends for life and everyone has been happy to have her by their side; the players and Irish FA staff have been great.  Myself and my wife Nicola can’t believe how much attention she has got; my phone hasn’t stopped since."

Diego along with his two brothers Fernando (10) and José Enrique (7) were more than happy to support Northern Ireland. Diego currently plays in the youth set-up for Deportivo Saprissa, one of the best teams in Costa Rica and still has the possibility of playing for either the Costa Rica or Northern Ireland senior teams in the future.

He said: "This is a great privilege and honour. I can't believe it. Even though I now live far away in Costa Rica, I was born in Belfast and always feel a strong connection to back home.”

In 2011 Justin Guiney lost his arm at the age of 21 and has been adapting to maintain his love of football ever since.

He told us: “It’s an honour to be named Fan of the Month for July, I’m truly over the moon. I still remember my first Northern Ireland game v Portugal, in 2005. It was actually the first football match I had ever went to see, I was hooked.

“I’ve already got my tickets to the upcoming games, there’s not much that will stand in my way from getting to the matches now.”

Ahead of Northern Ireland’s Nations League opener against Bosnia & Herzegovina in September Justin said: “I think the campaign card sales say enough about the new Nations League system, with 98% of cards being renewed.

“No-one wants to miss these games, all the games matter now and it’s clear the GAWA - which includes myself - want to be there to cheer the boys on.”

He joined the Irish Amputee Football Team in 2015 and remains to be the only member of the squad currently living in Northern Ireland.

As a regular at Northern Ireland games during the 1970s and 1980s, Ballymena fan Joe doesn't make it to games now but still won't miss a kick as he listens to the matches on his radio.

Joanne Graham said: "He enjoys talking but my granny (Joe's wife) tells me off sometimes for always getting info out of him. She will be 100 next year too!"

Nine-year-old Ethan Brown has wanted to attend a Northern Ireland match for a long time and in September the opportunity finally arrived!

As nephew of one of Northern Ireland's biggest fans, Dave Elliott, Ethan was given the tickets as a surprise and he couldn't have been happier about it. We talked to both Dave and Ethan after the game.

Dave, how long has Ethan been wanting to go to a match?

"Ethan is a massive football fan and has been nagging me to take him to a game for ages! He got lucky that none of my other mates were available for the Bosnia game so I kinda had to take him by default!

"Only joking, I was glad to take him and I actually surprised him with the tickets. He was over the moon! Initially he thought we were going to the cinema to see the Avengers. Not that it's a bad film, but an NI game is definitely better!"

James Wilkinson has been attending Northern Ireland games alongside his mother for years and doesn't intend to stop anytime soon.

"It's great to become Northern Ireland's Fan of the Month; it's a real honour. It's great that the Irish FA recognise the fans that go to the games and acknowledge it, it really means a lot.

"My first game was a friendly against Slovenia. Washington scored the only goal on his debut. The new stadium was still being built but the atmosphere was class. Once I got to that I made sure I went to every home game after," he revealed.

The 17 -year-old previously featured in a fans’ video with his mother Helen ahead of the International Challenge match against Israel. Now they would regularly attend games together at the National Stadium at Windsor Park.

Mark Adamson has been a Northern Ireland fan all his life and secured his Fan of the Month status in November with the wave of a flag at the perfect moment.

After 11 hours battling his way through the Barcelona Iron Man challenge, and with the finish line in sight, Mark could think of nothing better than to wrap himself in a Northern Ireland flag as he hit the tape.

"The finish line was going crazy with spectators and many flags were on display," Mark said. "After nearly 11 fatiguing hours, I spotted my eldest boy in amongst the crowd waving the NI flag.

"I couldn’t believe it, nor could I help myself. It was a fitting and emotional end to 12 months of hard training.”

At 41, Mark has been a part of the Green and White Army from childhood.

Members of the London Northern Ireland Supporters’ Club were named our Fans of the Month for December.

To date, sales of the Green and White Army exiles’ Michael O’Neill Lego figures - ‘Wee MON’ – have raised over £5,000 for charities across Northern Ireland. That means they are half way to reaching their goal of £10,000.

The mini Michael has the backing of the man himself who admitted that he and his family found it ‘very amusing’, adding: “It’s great to think that something small has the potential to help raise such a large amount for local charities.”