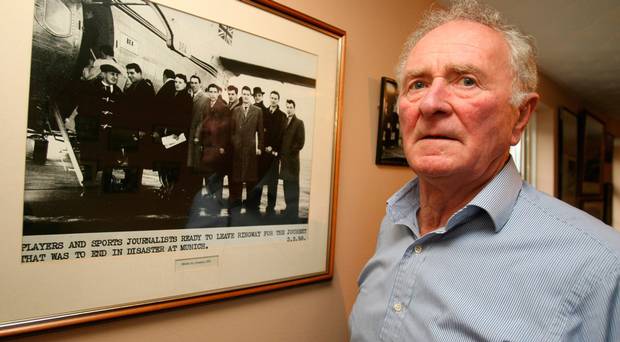 Gregg, who turned 86 in October, represented Northern Ireland 25 times and was part of the historic team that reached the quarter-finals of the FIFA World Cup in Sweden in 1958. His performances helped the team progress and saw him voted the best goalkeeper of the tournament.

During his time at Manchester United Gregg earned a place in club football history. Often dubbed the ‘hero’ of Munich, he pulled a number of his teammates, including Bobby Charlton and Jackie Blanchflower, from the burning plane at the Munich air disaster.

He played 210 times for Manchester United, from 1957 – 1966, having previously represented Doncaster Rovers. He finished his club career with a brief spell at Stoke City before retiring.

He enjoyed a successful coaching career after retiring from playing and returned to Old Trafford as a coach under Dave Sexton in 1978. He was appointed MBE in 1995.

In recent years he has given his name to the Harry Gregg Foundation which aims to further develop and facilitate the engagement of youth and to encourage participation in football and various other health, lifestyle, educational, heritage and social inclusion activities.

The 39-year-old has been an ever-present in the Northern Ireland set-up for more than 15 years. He has won 79 caps and has scored 9 goals, the most important of which came against Ukraine at UEFA EURO 2016. He was the first Northern Ireland senior men’s international player to score at a major tournament since Colin Clarke in 1986 and his crucial header helped Northern Ireland reach the last 16 of the tournament.

He started his club career in the Irish league representing Crusaders and Coleraine before moving across the water to join Lincoln City. He signed for Leicester in 2006 and made 74 appearances for the Foxes. He moved to Ipswich two years later, where he made 115 appearances before moving to the midlands to play for West Brom. He spent seven seasons at The Hawthrorns, all of them in the Premier League, notching up 203 appearances and scoring 15 goals. His most recent move was to Scotland where he now plays for Old Firm giants Rangers in the Ladbrokes Premiership.

Like Gregg, McAuley is a keen supporter of charity and following UEFA Euro 2016 he donated the shirt that he scored in against Ukraine to the Cancer Fund for Children.

Meanwhile, Crusaders manager Stephen Baxter has been awarded a BEM (a British Empire Medal) for his services to football in Northern Ireland. Baxter led Crusaders to their third Premiership title in four years last season.

‘I would like to offer my sincere congratulations to both Harry and Gareth on their prestigious appointments. They may have played in different generations, but both Harry and Gareth have represented Northern Ireland with distinction, both have put in historic performances in major international tournaments and both are keen supporters of charity. They are two of our country’s all-time footballing greats and I am delighted that they have been honoured in this way.'

Martin continued, 'It was also fantastic to see our local game recognised with a BEM for Stephen Baxter. A superb honour for a great manager.’