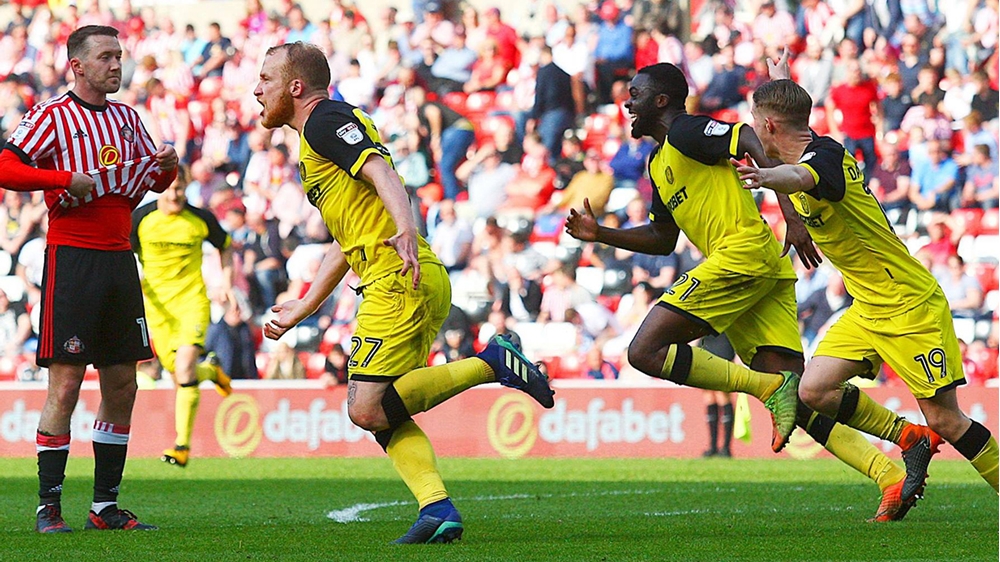 Burton Albion’s hopes of avoiding relegation from the Championship were kept alive at the weekend after Liam Boyce hit a dramatic injury-time winner against Sunderland at the Stadium of Light.

The former Cliftonville player glanced home a header in the 92nd minute to seal a vital 2-1 victory and in the process confirm the Black Cats relegation to League One.

The game had started positively for Chris Coleman’s charges with Paddy McNair’s scoring his third goal in as many games to give the home side a slender half-time advantage.

However, Boyce always believed that Albion could overturn the one goal deficit and claim a much needed three points: “We went a goal down but we kept believing that if we got one goal, even though it was really late in the 85th minute, that we could create another chance.

“Thankfully, it fell to me and I put it in the corner.

“Anyone playing football for anyone, a goal like that is unbelievable, you see everybody coming from the dugout and you realise what an important goal it was.

“I’m a couple of weeks off my summer body,” said Boyce, who now has three goals for the Brewers this term. “But I still had to get my top off and run over to the fans after I’d scored!”

Meanwhile, Burton boss Nigel Clough was in no doubt that his side would not be fighting relegation if the 27-year-old had not sustained a cruciate ligament prior to the start of the campaign.

“It’s nice when our striker, who’s been out for seven or eight months, gets the winner,” said Clough, “We’re adamant we wouldn’t be in this position if we had him available all season..

The only other Northern Ireland player to get on the scoresheet over the weekend was Caolan Lavery who came off the bench to score Rotherham United’s second goal in their 2-0 victory against Bristol Rovers to confirm their play-off spot in League One.

In the Premier League, Chris Brunt set up West Brom’s second goal in the 2-2 home draw with Liverpool to chalk up his 50th assist in the top flight for the Baggies.

Three other players managed assists for their clubs over a busy weekend of football; Will Grigg who helped Wigan to a 4-0 win at Fleetwood Town; Charlton’s Josh Magennis set up Nicky Ajose’s winner at Portsmouth while Carl Winchester clocked up his sixth assist of the season for Cheltenham Town who went down 4-3 at Cambridge United.

On the injury front, Stuart Dallas was ruled out of Leeds United’s win over Barnsley with a hamstring complaint while Jordan Jones (hamstring) and Niall McGinn (groin) were also missing as Kilmarnock lost at home to Aberdeen in the Scottish Premiership clash at Rugby Park.