Boys Across The Water | Will Grigg on 23 goals for wigan 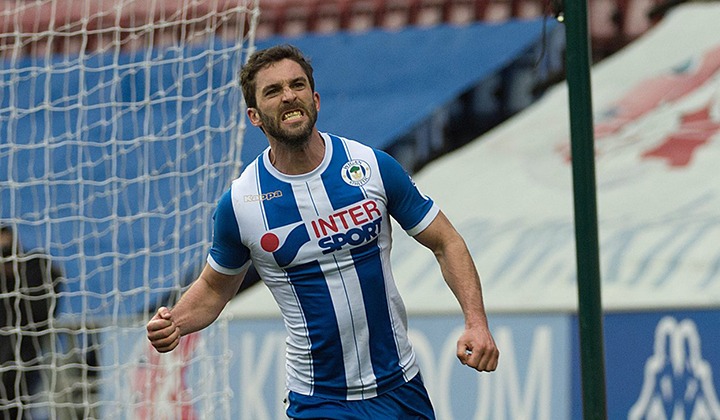 Wigan Athletic striker Will Grigg bagged his second hat-trick of the season as the Latics’ consolidated second place in League One with an emphatic 5-1 victory at home to MK Dons at the weekend.

The 26-year-old, who has now scored 23 goals this term, was delighted with the performance that leaves Athletic just two points behind leaders Blackburn Rovers with a game in hand.

“It was brilliant. From the first whistle we dominated and got the early goal and that set the tempo,” Grigg explained.

“We were a little bit disappointed at half-time because they got the goal and it gave them a massive lift.

“We knew if we got the third goal their heads would drop, which they did, and we kicked on from there.”

Also on target over the weekend was Sunderland’s Paddy McNair who gave the Black Cats an early second-half lead in the 1-1 draw with Leeds United at Elland Road.

“When you take the lead, you want to go on and win the game,” stated McNair. “We’re frustrated we couldn’t get the win.

“All we can do is take it one game at a time and take this performance into Tuesday when we are at home to Norwich City.

The 22-year-old was making his third consecutive start for the Tyne and Wear outfit, who still remain in the relegation places seven points from safety, a feat he has not managed since May 2015 when he was at his previous club Manchester United.

“The last 18 months have been hell for me, watching from the sidelines and not being able to get involved.

“I’ve been happy with my performances since I came back – I’ll always give my best and hopefully that can benefit the team and the club.”

One of the reasons Sunderland failed to conjure up a much-needed win on Saturday was due in part to new Northern Ireland under-21 goalkeeper Bailey Peacock-Farrell who pulled off a number of crucial saves.

“It’s nice to make some saves,” said the 20-year-old. “But I would rather make none and we have a nice tidy game and win 2-0, but that is how it is sometimes.

“The game was there for us to win, Sunderland came and tried their best and they tried to stop us, but we have to win those games and that is why we are where we are.”

In League Two Accrington Stanley are now just one win away from automatic promotion after Billy Kee’s 23rd goal of the campaign gave them a 1-0 victory at Colchester United.

There were goals too for midfielder Ben Reeves who earned Charlton Athletic a point at Bristol Rovers and striker Billy McKay who scored as Ross County drew 1-1 at home with Hibernian in Scotland.

Finally, there were assists for Kilmarnock winger Jordan Jones and under-21 midfielder Jordan Thompson who is currently on-loan at Livingston from Rangers.