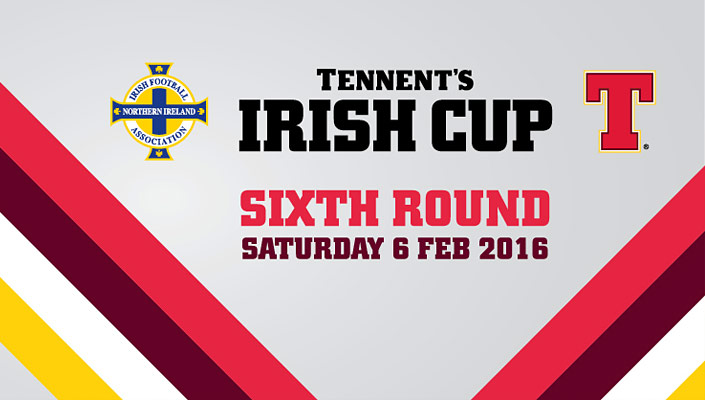 Perhaps the pick of the bunch is the intriguing meeting at The Oval of holders Glentoran and 2013/14 winners Glenavon.

Alan Kernaghan's side came out on top the last time the sides met, back in November, but that has proved to be something of an anomaly as Glentoran have stuttered somewhat since then and now trail Glenavon by some 15 points in the league.

Kernaghan recognises the importance of the game to Glentoran's season. "It's a big game, there is no question about that," he told the News Letter. "We still have a lot to play for in terms of the rest of the league campaign but, the reality is, the cup is now our only hope of winning a trophy."

But he's also very aware that the Lurgan Blues pose a formidable threat to any hopes of a successful cup defence. "I had the chance to watch Glenavon's midweek win over Carrick Rangers. They won with plenty to spare. They have a great squad of players so we'll have our work cut out."

League champions Crusaders travel to Stangmore Park to take on a Dungannon Swifts side reeling from a six-goal mauling during the week.

The Swifts lost heavily to Linfield but boss Rodney McAree is demanding a response from his players. "Hopefully Tuesday was a one-off from the lads. If we defend the way we did against Linfield then we will end up on the receiving end once again," he said.

"We have to regroup and get ready to go again against Crusaders. We have to deal with it and move on. We need it out of our system."

At Shamrock Park both Portadown and Coleraine will be looking to put an end to their respective losing streaks. The Bannsiders haven't avoided defeat since the last round while the Ports have lost their last six league games.

Both managers are well aware of the importance of tomorrow's encounter. "It is a massive game for both clubs. We all know the importance and winning and progressing to the quarter-finals," said Ports manager Ronnie McFall.

His opposite number, Oran Kearney, agrees: "It's a monster tie, especially as it's away from home as it makes it even tougher, but we'll be ready for it.

"We have had two good results against Portadown this season, but I don't expect this to be anything like those games. There's an awful lot of play for, it makes for a really big tie."

It wouldn't be the cup without the potential for an upset or two, so what odds Crumlin Star to turn over Carrick Rangers at the Belfast Loughshore Hotel Arena, or Sport & Leisure Swifts to topple Cliftonville at Solitude?

Crumlin, from the Northern Amateur League, will be hoping to take advantage of a Carrick side still reeling from a heavy midweek home defeat whilst Swifts have already punched above their weight with a fifth round defeat of Institute so will have their sights on an even greater scalp in the shape of Gerard Lyttle's in-form Reds.

Elsewhere, it's a big day out for Armagh City as they take on Linfield at the National Stadium  while there are two 1:30pm kick-offs at Loughgall (v. PSNI) and Lurgan Celtic (v. Knockbreda) with the prize of a quarter-final place at stake.