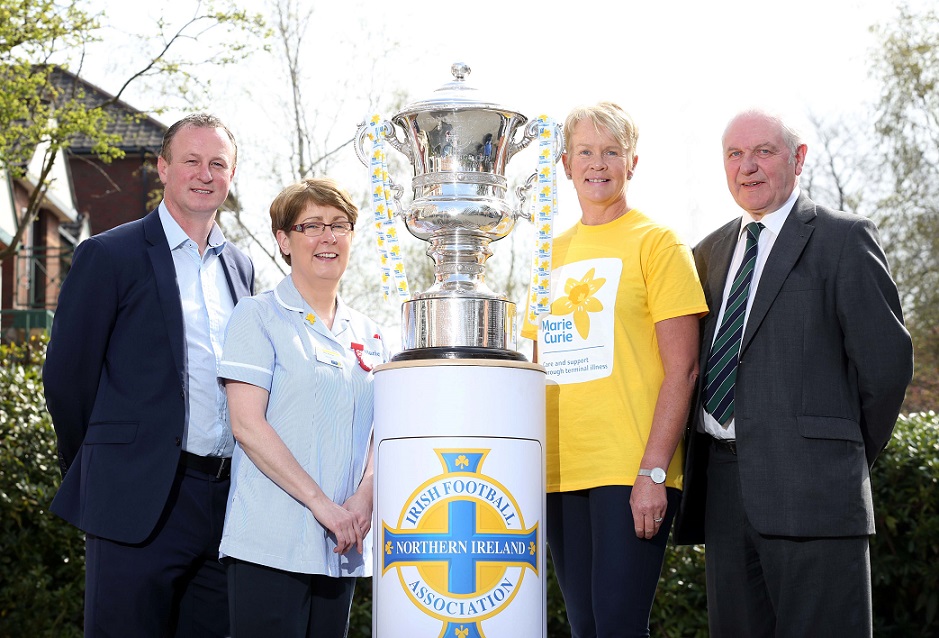 The Marie Curie Irish Cup Final between Glentoran and Portadown will take place at the Oval, Belfast on Saturday 2 May (kick-off: 2.30pm).

Chairman of the Challenge Cup Committee and Irish FA President, Jim Shaw said:  “I am pleased to announce that Marie Curie has been given the naming rights of this year’s Irish Cup Final.

“Marie Curie was the official charity partner of the Irish Football Association for two years and were given the naming rights of the 2013 and 2014 Finals.  This provided them with a tremendous platform to raise awareness of the charity and by giving them the naming rights of this season’s Final will allow them to continue to raise awareness of the great work that they do.”

Marie Curie is Northern Ireland’s leading charity for people with any terminal illness.  It helps people living with a terminal illness and their families make the most of the time they have together by delivering expert hands-on care, emotional support, research and guidance.

Anne Hannan, Sales and Partnership Manager, Marie Curie said: “We’re delighted to once again have support from the Irish FA and to be involved with the Irish Cup Final for a third time.

“2015 marks a special year for Marie Curie for two reasons.  Firstly, the charity will be celebrating 50 years of Hospice care in Northern Ireland, and secondly it will be providing care for people living with any terminal illness irrespective of diagnoses.

“On behalf of everyone at Marie Curie I’d like to take this opportunity to thank the Irish FA for its continued support and to wish both Portadown and Glentoran the best of luck in the Final.”