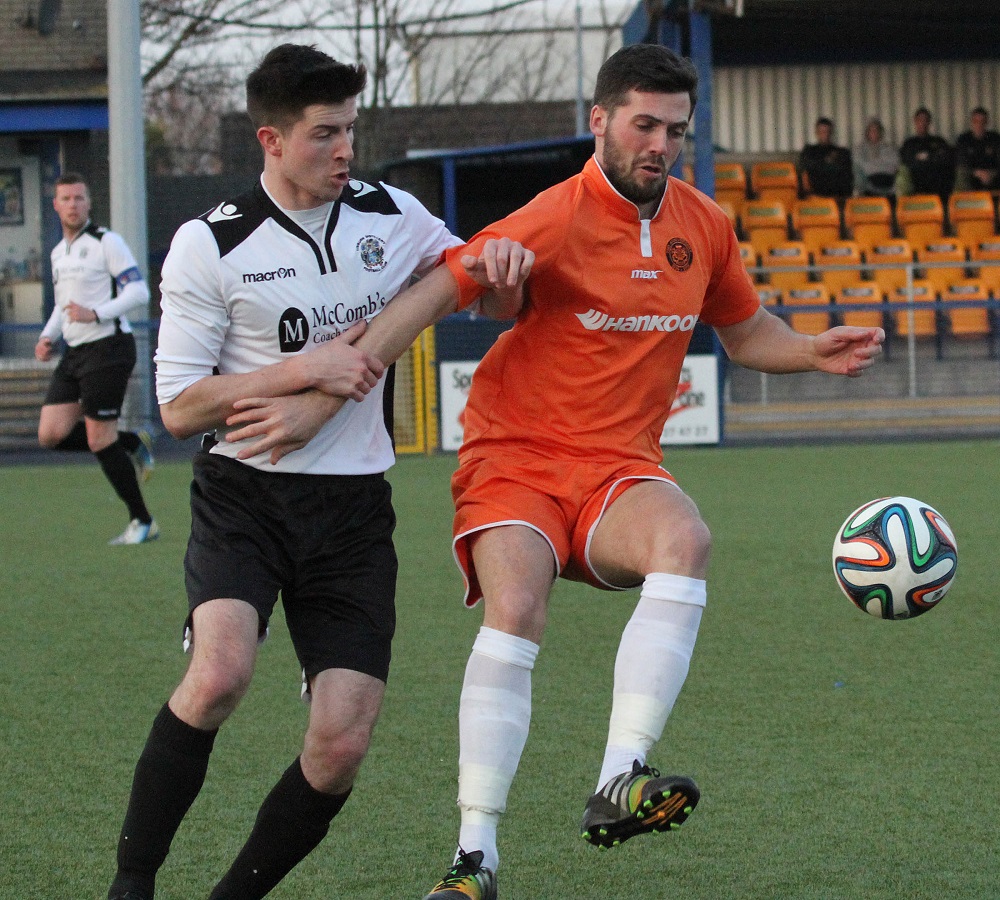 Carrick dictated the pace in a very one sided first half and could well have had the game tied up by the break if they had taken more of their chances.

After 12 minutes Harmon found Chines with a perfectly weighted pass, but the Carrick striker failed to test McBride in the Whites goal.

Adam Dick should have given Carrick the lead on 18 minutes after excellent work on the left flank from Aaron Traynor.

Carrick sustained their assault on the Lisburn Distillery goal with further efforts from Ben Roy, Adam Dick and Aaron Traynor and made the inevitable breakthrough on 33 minutes when Adam Dick headed into the path of Kyle Cherry to slot past McBride.

Lisburn Distillery's first real attack of the game came on 37 minutes, but Mikey Withers blasted over the bar from the edge of the penalty area and they almost equalised in the 41st minute when Steven Mills clearance was charged down by Martin Jones and Carrick Rangers were fortunate that the ball was deflected off target.

Miguel Chines came agonisingly close to doubling the lead for Carrick when he struck the woodwork in the 44th minute after an excellent passing move involving Watson, Dick and then Chines, whose effort deserved a goal but clipped the upright.

In the first minute of added time Chines hit the woodwork again when he connected with a Ben Roy cross.

Carrick started the second half on top again and went close on 57 minutes when Chines almost deflected a Ben Roy shot past McBride, but saw his effort go over the bar.

Against the run of play Lisburn Distillery equalised when Stephen Doyle's 69th minute free kick created mayhem in the Carrick penalty area and the ball was bundled over the line along with Carrick keeper Mills.

Carrick's response was immediate and Chines restored their lead in the 70th minute pouncing on an effort that McBride could on parry into his path.

Chines also went close after 76 minutes with a curling free kick from the edge of the box and McBride was relieved to see the ball fly wide of his right hand post.

To their credit the Whites kept battling and were rewarded with an equalising goal in the 89th minute to take the game into extra time.

Again Doyle's testing free kick from the right flank was put into the danger area and Martin Young made no mistake volleying home inside the 6 yard box.

The game looked destined for penalties with neither side creating many chances in extra time until the 106th minute when Aaron Harmon delivered a perfect cross for the man of the match Chines to pounce on to send Carrick Rangers into the final were they will meet H&W Welders after their 2-0 victory against Bangor at Seaview. 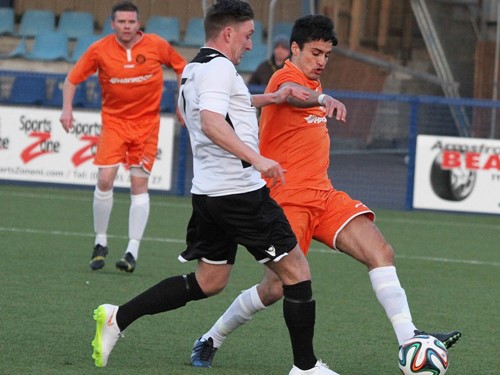 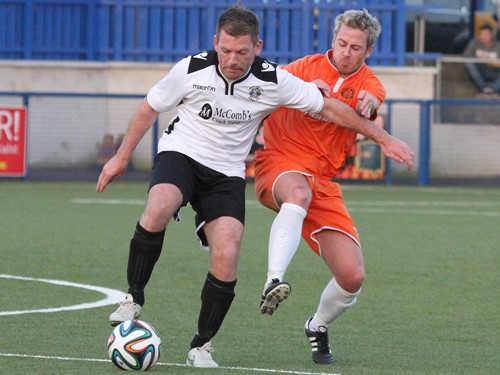 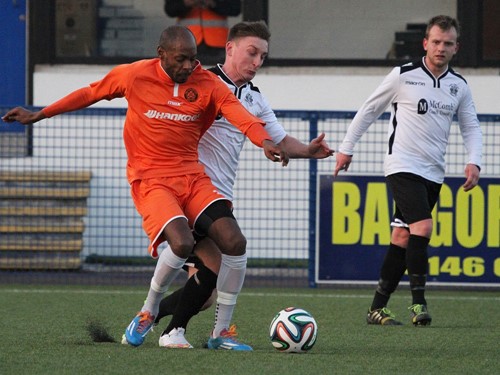 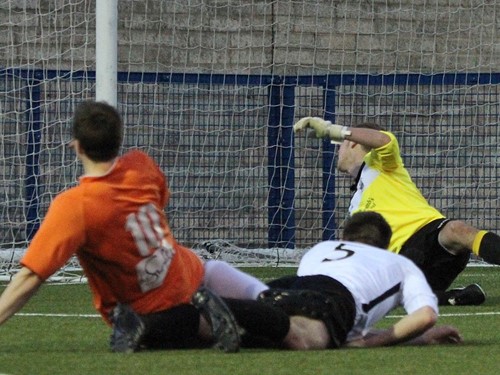 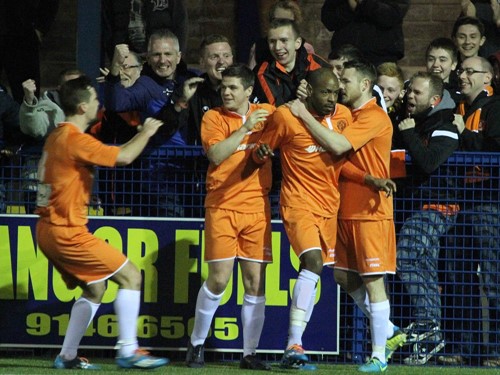 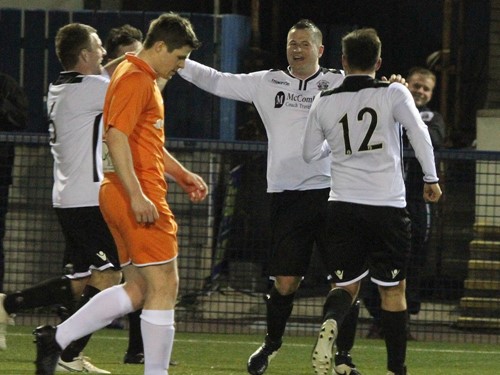 Martin Young (centre) makes it 2-2 with his goal for Lisburn Distillery. 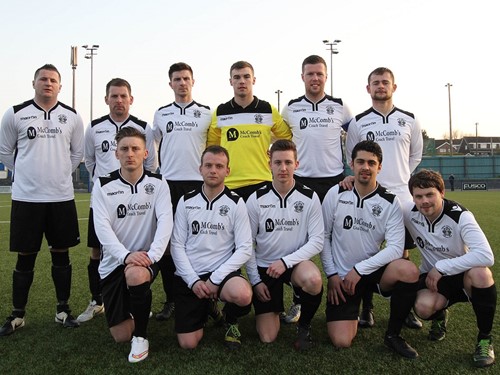 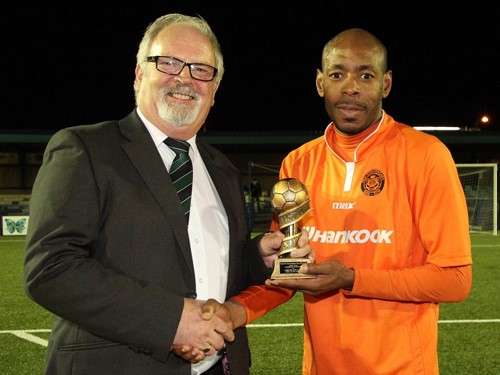 Miguel Chines receives the Man of the Match award from Mervyn Martin, Chairman of the Intermediate Cup Committee. 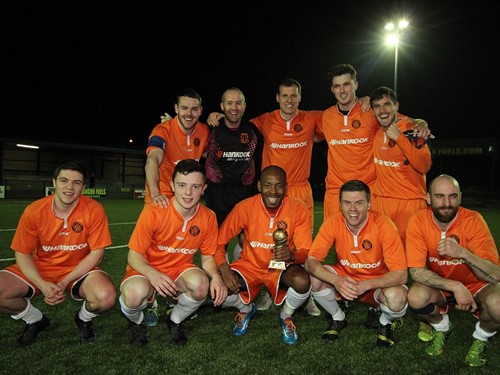