Northern Ireland’s Under-19s booked a place in the elite round of U19 Euro 2023 qualifying after a 2-0 win over Moldova tonight.

Gerard Lyttle’s side produced an excellent performance to finish second inGroup 13 of the 2022-23 UEFA European Under-19 Championship qualifying round – and that was enough for automatic qualification to the elite round next spring.

The four-team Group 13 mini tournament has been taking place in the Netherlands over the past week – and Northern Ireland pipped the Dutch to the runners-up spot in the group on goals scored.

Northern Ireland drew 2-2 with table toppers Slovenia in game one and then 0-0 with the Dutch in their second game.

However, Northern Ireland’s four goals compared to the Dutch team’s two during the tournament was enough to secure qualification to the elite round.

Callum Marshall and Conor Scannell scored the goals on 72 minutes and 84 minutes respectively for Northern Ireland at the Sportpark Marsdijk in Assen.

After a frenetic start, Northern Ireland settled down and dictated most of the play in the first half. They pressed and passed well.

Northern Ireland winger Charlie Lindsay had the first chance of the game, forcing a save out of Moldovan keeper Roman Dumenco in the sixth minute.

However, the boys in green and white had a let-off minutes later when, against the run of play, Moldova winger Dorian Nacu hit the bar and striker Iulian Bejan steered the rebound wide. 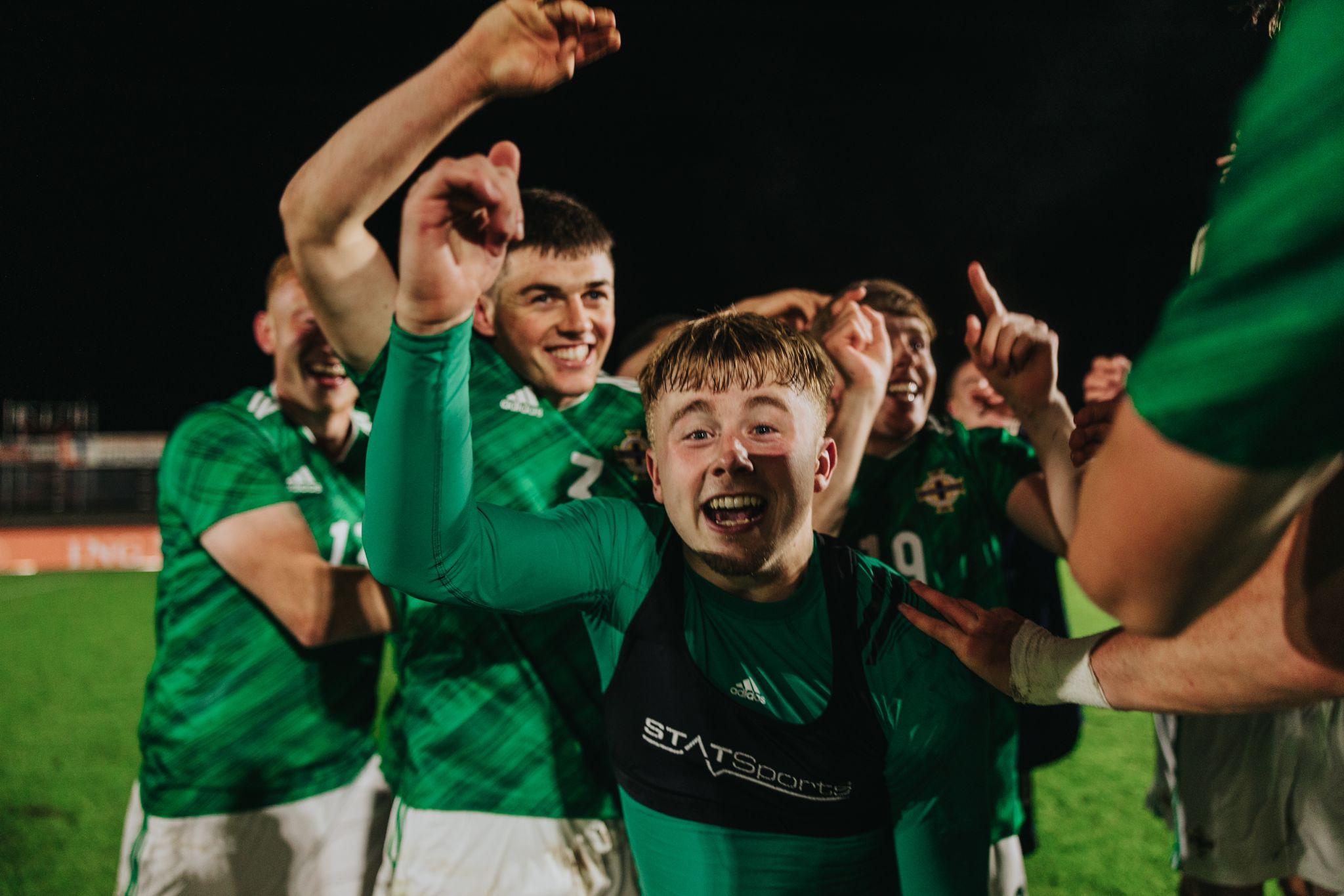 On 16 minutes Lindsay had another effort blocked before midfielder Patrick Kelly also had a shot blocked.

Then a Kelly drive veered off target before a Lindsay corner was met by captain Michael Forbes, however his header also went wide.

The lively Lindsay cut inside and curled an effort wide before Moldovan winger Marius Scutaru saw his strike snuffed out.

As half-time approached Northern Ireland keeper Josh Clarke made a fine stop from a Nacu attempt on goal.

Just after the break Dumenco produced an excellent save to keep out a blaster from striker Marshall.

Marshall opened the scoring on 73 minutes with a tidy finish. A Matty Carson free-kick caused a scramble inside the area and Marshall pounced on the loose ball to drill it through a sea of bodies into the bottom corner.

Minutes later Michael Forbes got on the end of a Carson cross and his header cannoned off the crossbar. The rebound fell to Marshall whose overhead kick hit the base of the post.

Northern Ireland now had their tails up and continued to push forward.

Dumenco saved well from a Carson drive before Lindsay had a shot saved by the stopper.

Then it was Scannell’s turn to have a go, but again the Moldovan keeper was equal to his effort.

The second goal was scored with 10 minutes to go. Substitute Rio Morgan floated in a free-kick to Lindsay at the back post and he cut the ball back for Scannell to apply the finish. It was a well worked goal.

In the closing stages Lyttle’s boys continued to push forward. A Carson free-kick found Morgan but he steered his effort wide.

However, Northern Ireland had done enough to deservedly secure qualification to the elite round.