Northern Ireland boss Ian Baraclough has included one new face in his squad for the UEFA Nations League matches against Kosovo and Greece this month.

Kofi Balmer has received his first senior call-up after switching from Larne to Crystal Palace in the summer. The young defender, who will celebrate his 22nd birthday on Monday, previously played for his country at U21 and U19 level. He is the only uncapped player in the panel.

The 24-strong Northern Ireland squad for the League C Group 2 home game against Kosovo (24 September) and away fixture against Greece (27 September) shows several changes from the one chosen by Baraclough for the Nations League quadruple header in June. 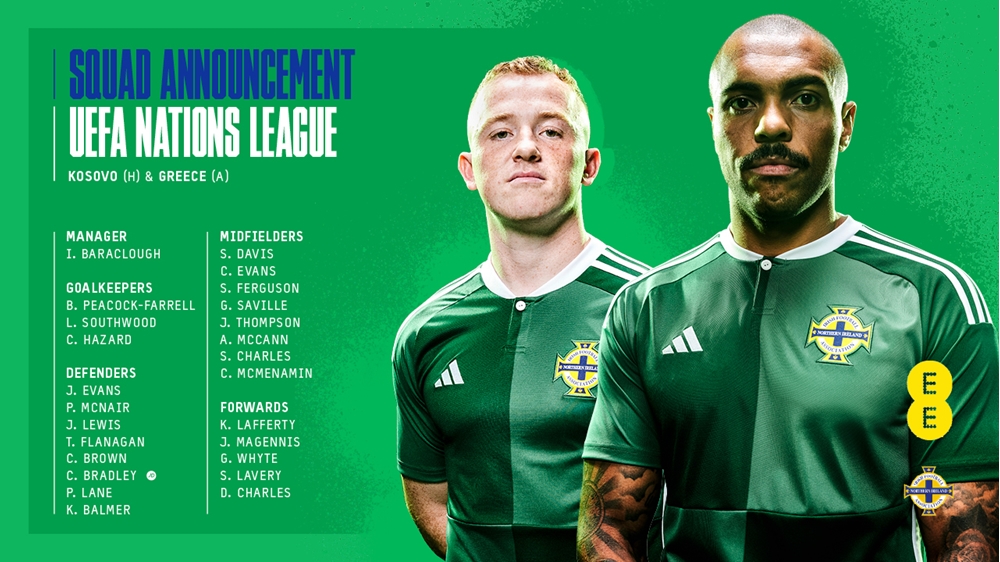 Also back is Newcastle United defender Jamal Lewis, who is fully fit again after a series of injury setbacks last season.

To date Northern Ireland have drawn twice and lost twice in C2. They opened their latest Nations League campaign with a 1-0 defeat to Greece in Belfast before drawing 0-0 away to Cyprus. The third game in the summertime quadruple header saw them lose 3-2 away to Kosovo, while the final game in the series was a 2-2 draw with Cyprus at home.

Sunderland defender Daniel Ballard, who scored against Kosovo in Pristina, is not available for the final two games of the campaign due to injury, while missing out this time are Dundee winger Niall McGinn, Kilmarnock midfielder Liam Donnelly and Huddersfield Town defender Brodie Spencer, who made his senior debut in June.

Also not included are goalkeepers Trevor Carson (St Mirren) and former Glenavon stopper Josh Clarke, who is now with Celtic.

Watford defender Craig Cathcart and Rotherham United striker Conor Washington, both of whom missed the four matches in early summer, have not been included in the panel, while Leeds United defender/midfielder Stuart Dallas is a long term absentee due to injury.