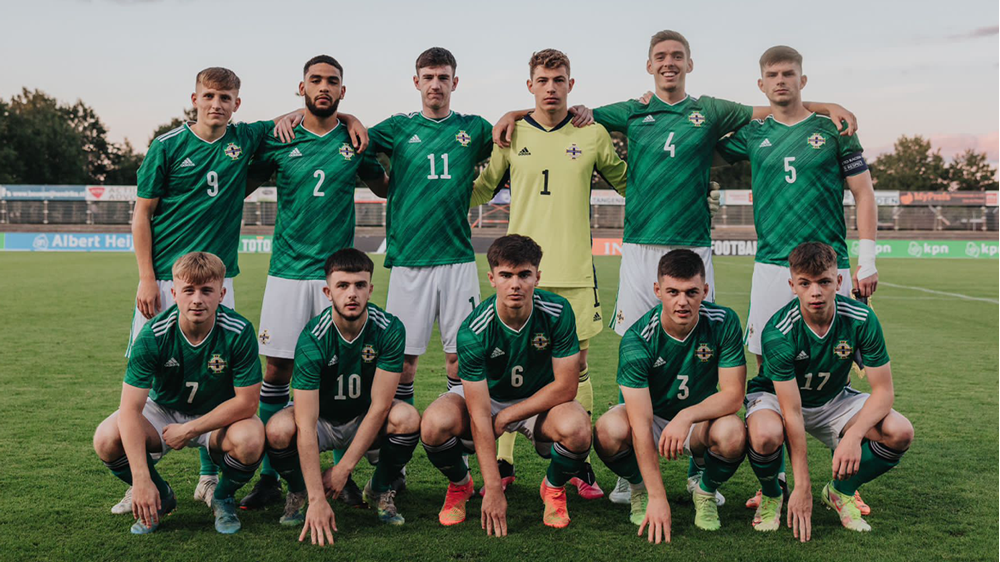 Northern Ireland Under-19s began their latest series of U19 Euro qualifiers with a hard fought 2-2 draw against Slovenia’s U19s.

Gerard Lyttle’s side are in the Netherlands this week competing in Group 13 of the 2022-23 UEFA European Under-19 Championship qualifying round.

And in their first game in a four-team mini tournament, against Slovenia U19s in Assen this evening, they had victory in their grasp but fell at the final hurdle. They were leading 2-1 up until the 90th minute when Slovenia equalised with a stunning free-kick.

Midfielder Patrick Kelly, who switched from Coleraine to West Ham United back in the summer, was the goalscoring hero with a double, however the Northern Ireland defence were also heroic as the Slovenians attacked at every given opportunity. During the game Slovenia had 18 attempts on goal compared to Northern Ireland’s seven.

Slovenia were quicker out of the blocks than Northern Ireland at the Sportpark Marsdijk.

Northern Ireland keeper Josh Clarke was tested by midfielder Tom Kljun after six minutes but was equal to his effort.

Then midfielder Charlie Lindsay delivered a free-kick which defender Ruairi McConville steered wide before Kljun fired in another shot that was saved by Clarke.

Slovenia’s Mitja Ilenic had a shot blocked before Kelly forced a save out of Slovenia keeper Nejc Dermastija.

On 29 minutes Clarke had to be alert again to keep out an effort from Niko Kasalo. Down the other end striker Callum Marshall had a shot saved by Dermastija.

Northern Ireland’s first goal came on 33 minutes. Lindsay fired in a corner which was met by captain Michael Forbes. The defender’s header was cleared off the line, however Kelly volleyed home the loose ball through a sea of bodies to open the scoring.

The next chance for Northern Ireland brought goal number two. Lindsay produced a sweet chip which the Slovenian keeper managed to push over the top. The resulting corner saw Matty Carson pick out Kelly at the front post and he once again volleyed the ball home.

Slovenia pushed forward towards the end of the first half. First the busy Kljun had a shot blocked and then Clarke saved well from Nino Milic.

Just after the break Kelly almost had his hat-trick. He played a neat one-two with Marshall and was unlucky to see his drive come back off the inside of the post.

That let-off appeared to spark Slovenia into life, with Ilenic missing a couple of chances and both Nejc Klasnja and Marcel Lorber going close.

Slovenia continued to push forward and Klasnja and Milic steered efforts wide of the target.

On 76 minutes they pulled a goal back with defender Srdan Kuzmic firing home from an angle.

Minutes later Slovenian substitute Jaka Potocnik steered a shot wide as his team went in search of an equaliser.

As the full-time whistle approached Forbes conceded a free-kick for a foul on Slovenia substitute Aleks Ristic.

Fellow sub Potocnik stepped up to take the free and curled the ball superbly into the top corner to make it 2-2. It was a real sucker punch at the home of amateur football club Achilles 1894.

Right at the death another substitute, Luka Turudija, had a chance to win it for Slovenia, however he dragged his effort wide of the target.

Next up for Northern Ireland’s U19s is an encounter with tournament hosts Netherlands at the same venue on Saturday (24 September, 2pm start UK time) and their final group match is against Moldova, again at Sportpark Marsdijk, next Tuesday (27 September, 6.30pm UK time). The Dutch defeated the Moldovans 2-0 in the other group game this evening.