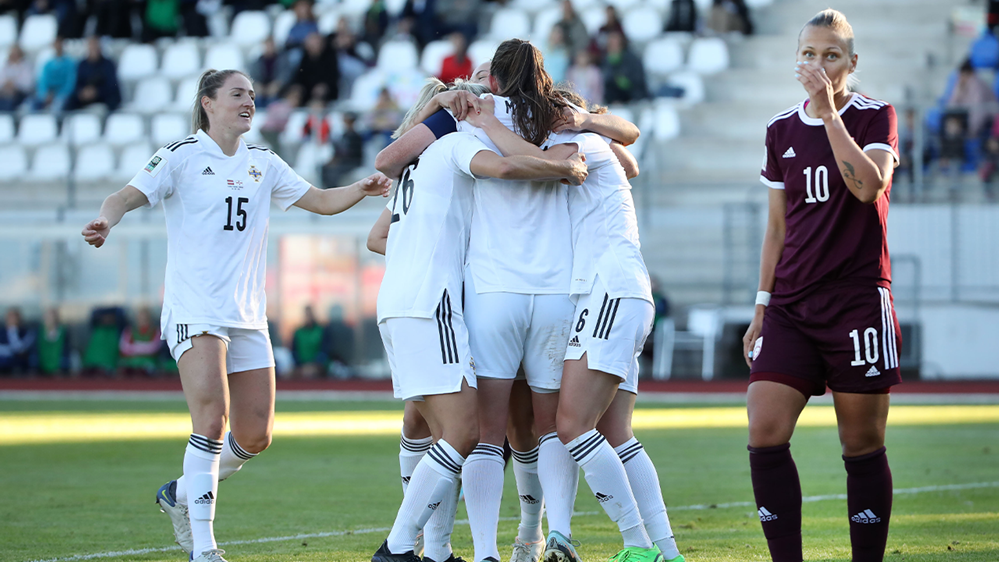 Northern Ireland had to come from behind to secure a 3-1 win against Latvia in their final FIFA Women’s World Cup 2023 qualifier this afternoon.

Amazingly all three of Northern Ireland’s goals were scored by the opposition. Latvia keeper Enija-Anna Vaivode notched two of them, while the other was netted by defender Arta Luize Lubina.

The somewhat bizarre victory at the Sloka Stadium in Jurmala meant Kenny Shiels’ side created history. It brought their points tally in European Group D to 19 – a record haul for a qualification campaign involving the senior women’s team.

Shiels made five changes from the side that started in the 2-1 victory over Luxembourg on Friday. 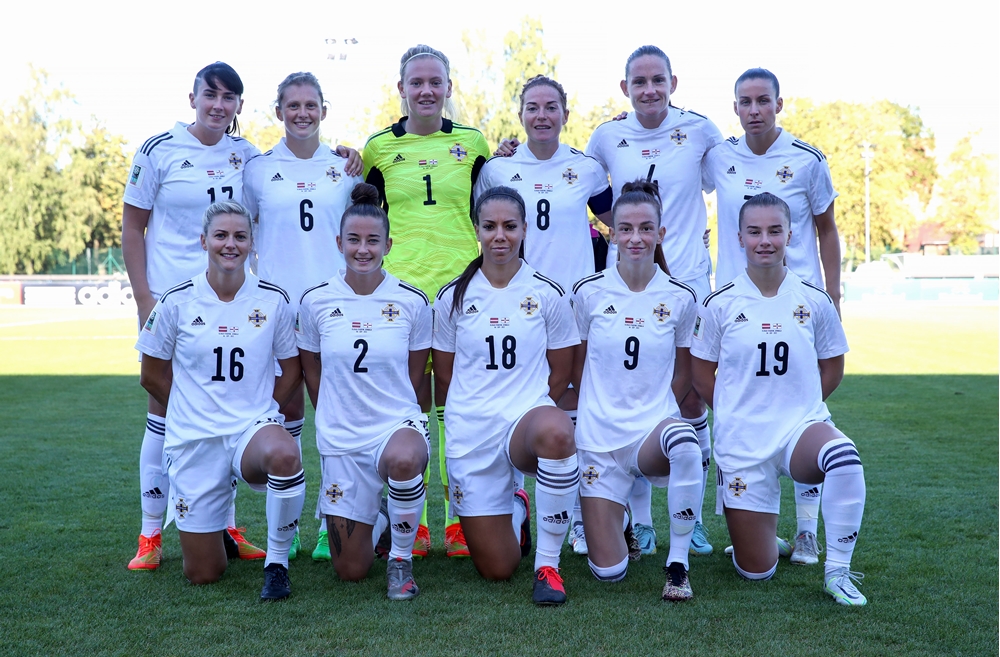 Two of the three players who made an impact after coming off the bench at half-time in that game, midfielders Nadene Caldwell and Caragh Hamilton, were given starting berths alongside debutant Ellie Mason.

The early action saw Northern Ireland keeper Jackie Burns pluck a corner from Latvia captain Sandra Voitane out of the air just under the bar before Northern Ireland striker Caitlin McGuinness scooped a shot past the upright.

Mason had a great run from deep but dragged her shot wide before Toni-Leigh Finnegan tested Vaivode with a long range free-kick. 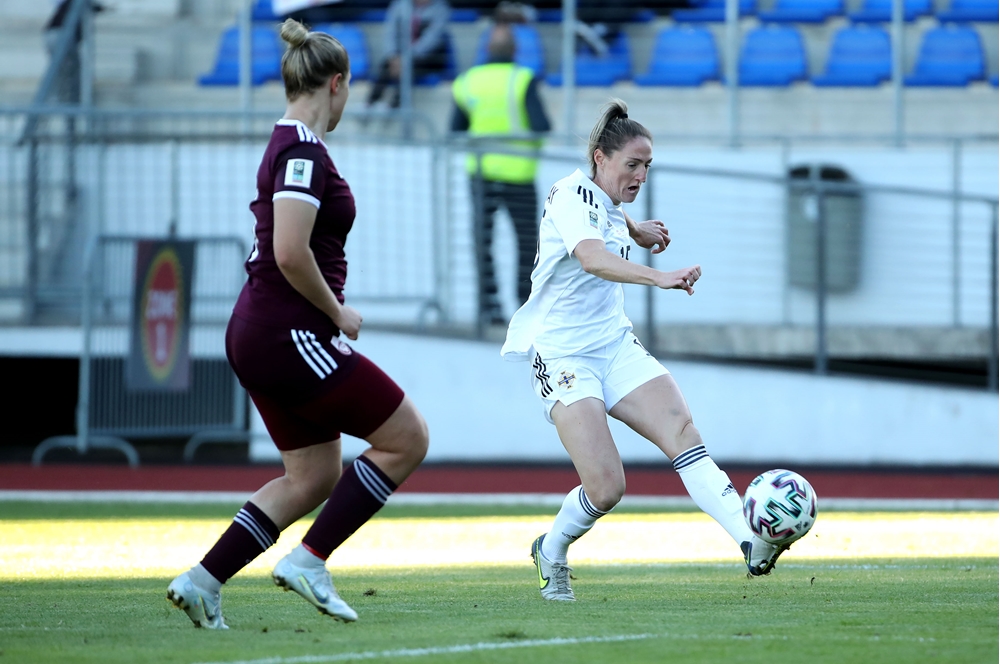 Rebecca McKenna, who passed a late fitness test after hurting her ankle in training yesterday, produced some neat combinations with Hamilton, forcing a couple of corners, as Northern Ireland pushed forward.

Latvia, showing five changes from the team that lost 4-0 to Northern Ireland in the reverse fixture last September, rarely threatened until they made the breakthrough close to the half-hour mark.

On 27 minutes Burns, who had had very little to do up to that point, pushed a Nelle Treimane strike over the bar.

However, she could not keep out Anastasija Rocane’s header from the resulting corner. Demi Vance got caught under the ball and Rocane powerfully met Voitane’s accurate delivery to put the home side one up.

A cross from Emily Wilson was punched away by the Latvia keeper. McKenna met the loose ball but blasted it over the top.

Northern Ireland drew level in the 36th minute. Vance fired in a corner and the ball hit Vaivode on the head before dropping into her own net.

Just before the break Burns produced a fine stop to keep out an Olga Sevcova shot after she had beaten the offside trap, while Vance’s strike from just inside the area drifted wide.

The first real chance of the half came on 58 minutes when Northern Ireland skipper Marissa Callaghan pounced on a loose ball inside the box and lobbed Vaivode only to see her clever effort cannon off the crossbar. 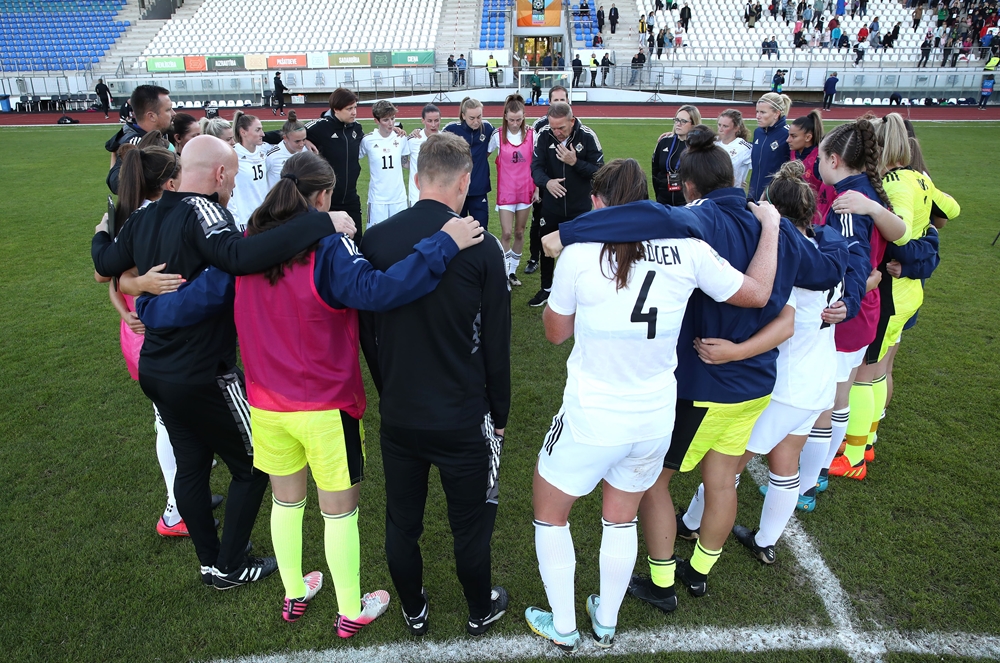 Hamilton was played in down the right and headed for the bye-line, but her cross was smothered by the keeper.

Holloway had a long range shot which drifted over the bar and then Kirsty McGuinness slipped in Holloway but her delivery across the face of goal evaded the Northern Ireland front line.

Northern Ireland took the lead in the 89th minute. It came once again from a Vance delivery from a corner. The ball was met by McFadden who headed it across the goalmouth where it hit Lubina's back and flew into the net.

In added time a drilled Kirsty McGuinness effort was blocked by the Latvian defence.

And then Burns kept Northern Ireland in front when she dived full length to push away a close range strike from Latvian substitute Viktorija Zaicikova.

Right at the death, in the 95th minute, Latvia scored the third own goal. Sarah McFadden lofted a pass to Kirsty McGuinness, who sped forward before drilling the ball across the box to the incoming Hamilton. She smashed the ball against the post, however the rebound bounced off Vaivode into the back of the net.

It was a bizarre end to a campaign which saw Northern Ireland secure third place in European Group D behind table toppers England and Austria. The hope is that the impressive points haul will be enough to improve Northern Ireland’s co-efficient for future competitions.