Northern Ireland senior men's boss Ian Baraclough is confident his players can help to put a smile on Jonny Evans’ face as he earns his 100th cap for Northern Ireland tonight.

Evans is set to reach the milestone - only the fourth Northern Ireland player to do so after Pat Jennings, Aaron Hughes and Steven Davis - when the boys in green and white take on Greece in Athens. 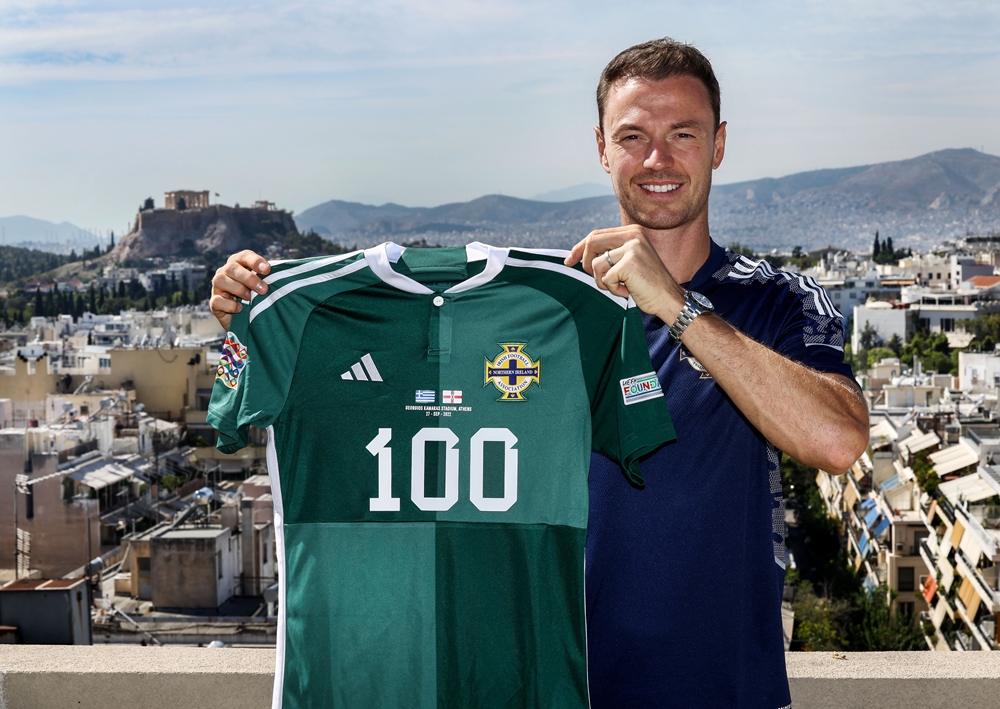 And the experienced defender will captain his country in the UEFA Nations League encounter at Georgios Kamaras Stadium in the Greek capital (7.45 kick-off UK time).

Baraclough, on confirming Evans will wear the armband, said it had been an honour and a privilege to have played a small role in Evans’ long and distinguished Northern Ireland career.

More than 1200 members of the Green and White Army are due to be in the ground tonight, while the Hellenic Football Federation (Greek FA) is expecting around 3000 to 4000 Greece fans to attend. The stadium has a capacity of circa 14,000.

Saturday’s win over Kosovo has given the Northern Ireland squad a huge lift, however they know they will have to go again against the Greeks.

Greece, who have already won the League C Group 2 section, lost 1-0 to Cyprus at the weekend.

That result means Northern Ireland and Cyprus both have five points from their five matches in the group to date, while Kosovo have six.

Kosovo are at home to Cyprus this evening and if the Kosovans win then Cyprus (-4 goal difference) will face a relegation play-out unless Baraclough’s boys (-1 goal difference) are heavily beaten.

However, if the Kosovans and Cyprus draw then Northern Ireland will need at least a point against Greece to retain their place in League C for the next edition of the competition.

The Northern Ireland boss insists his players will be playing to win at the multi-purpose venue in the Rizoupoli area of Athens that is home to Greece Super League 2 side Apollon Smyrnis.

He said his players want to build momentum following the 2-1 victory over Kosovo in Belfast at the weekend.

Baraclough believes Greece will want to bounce back from their unexpected defeat to Cyprus.

He noted the game against the Greeks in Belfast back in June, which Greece won 1-0, was a tight affair and he believes it will be another pretty even contest in Athens.

Although the Greeks have already gained promotion to League B for the next edition of the competition, their head coach, Gus Poyet, told media yesterday that they want to secure win number five in the group at the Georgios Kamaras stadium. He also said he is expecting a physical battle against Northern Ireland

Like Baraclough with Northern Ireland, Poyet has been blooding younger players of late, however the average age of the players in his squad is still around 27.

The most experienced member of the Greek panel is captain and striker Tasos Bakasetas, who earned his 50th cap against the Cypriots on Saturday. He plays his club football with Trabzonspor in Turkey.

The Greeks don’t have many goals in their squad. Bakasetas is the player with most goals; he has eight to his name on the international stage.