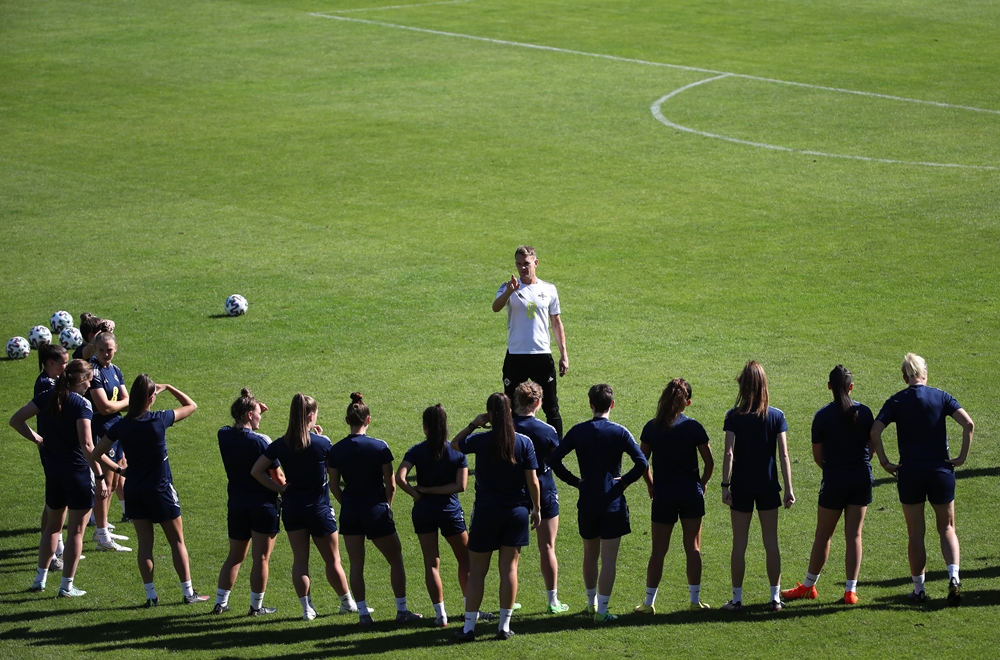 The Northern Ireland senior women’s team can make history once again when they face Latvia in their final FIFA Women’s World Cup 2023 qualifier this afternoon.

If Kenny Shiels’ side defeat the Latvians at the Sloka Stadium in Jurmala (3 o’clock start, UK time) they will set a new record for the number of points secured by a Northern Ireland women’s team in a qualification campaign.

In the current campaign they have already surpassed the then record 14 points in UEFA Women’s Euro 2022 qualifying which took them to a play-off and ultimately to an historic first appearance at a final tournament.

But Shiels is determined that his team end their series of matches in European Group D on a high with another victory - it would be their sixth win in the group - and that would bring a new record of 19 points.

On paper a record points haul should be well within their grasp. Latvia, who were defeated 4-0 by Northern Ireland in the reverse fixture last September, are propping up the table having conceded 60 goals to date, although half of those were shipped against group winners and European champions England across two matches.

However, Northern Ireland are going in to the game without the firepower of record goalscorer Rachel Furness and experienced striker Simone Magill, while winger Lauren Wade, another contributor of goals, looks likely to sit the match out after missing last week’s 2-1 win over Luxembourg due to an ankle injury.

On top of that Kirsty McGuinness, another regular scorer for her country, is a major doubt with what the manager described as a niggling injury.

Also nursing an injury is full back Rebecca McKenna, who scored the winner in Friday’s World Cup qualifier against Luxembourg at Stade Émile Mayrisch in Esch-sur-Alzette. She hurt her ankle in training yesterday.

Shiels indicated yesterday that the absence of senior players will provide younger players with the opportunity to show what they can do.

The team was a mix of youth and experience against Luxembourg and he looks set to have that balance once again.

Their World Cup 2023 qualification hopes may have been dashed already, and they may have already secured third place in the group behind England and Austria, but the manager insists Northern Ireland must win the game to improve their co-efficient for future competitions.

Most of their players ply their trade in the Latvian league, although a handful of members of their squad are with Polish and Icelandic clubs.

Voitane, who is 22, has already won more than 50 caps for her country and has notched 14 goals.

Full back Anastasija Rocane, who also scored against North Macedonia on Thursday, is the only other player in the current squad that has hit the 50 caps mark. The 30-year-old plays her club football in Poland with KKPK Medyk Konin.

Also at Medyk Konin is midfielder Karline Miksone (22). She will earn her 50th cap in Jurmala if selected.