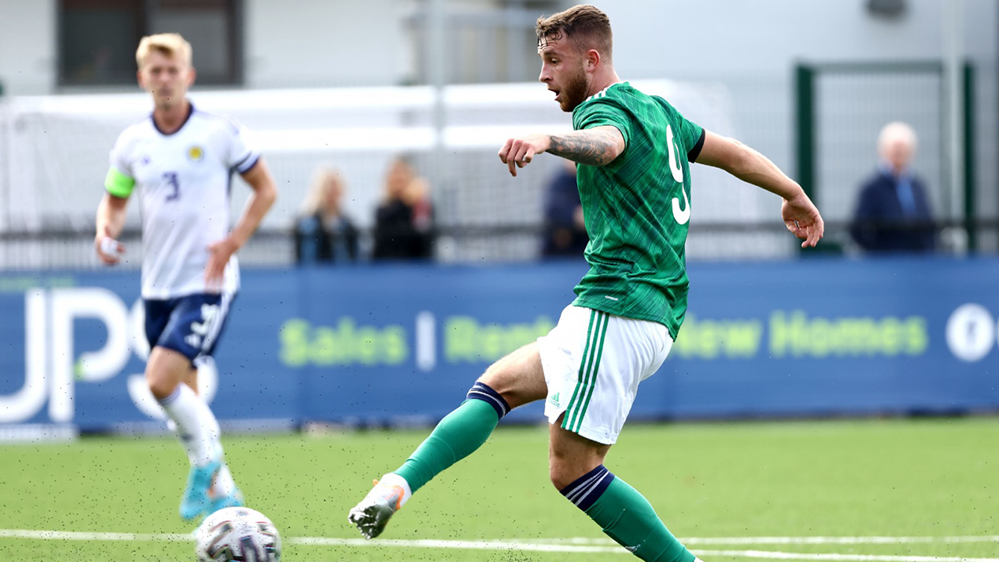 Northern Ireland’s Under-21s lost 3-1 against Scotland’s U21s in a friendly at Belfast’s Blanchflower Stadium this afternoon.

John Schofield’s side started brightly but the Scots dominated the middle period of the game and inflicted the damage then.

Scotland scored twice towards the end of the first half and just before the hour mark to put themselves firmly in the driving seat before Northern Ireland grabbed a consolation through Chris McKee.

During the early exchanges a header from Northern Ireland defender Sam McClelland was cleared over the top by the Scottish defence before Scotland midfielder Josh Mulligan’s well struck shot from outside the area fizzed inches past the post.

Northern Ireland’s best chance of the half came when striker Dale Taylor got on the end of an Isaac Price flick-on at the edge of the penalty area. Taylor cleverly flicked the ball over Scotland keeper Cieran Slicker and got a shot away but defender Connor McAvoy managed to clear the ball.

Scot Gemmill’s side took the lead on 35 minutes when a Connor Smith delivery from a free-kick was powerfully headed home by Kieron Bowie.

Two minutes later the visitors went two up. Midfielder Michael Craig played an excellent defence splitting pass to substitute Ben Doak and he raced clear of the home defence before sliding the ball past Northern Ireland keeper Dermot Mee into the corner of the net.

As half-time approached Doak raced down the flank once again and Mee did well to collect his low cross.

Just after the restart Northern Ireland midfielder Charlie Allen let fly from just outside the area but his shot went over the top.

Then Caolan Boyd-Munce fired in a corner which was headed over the bar by Trai Hume.

Scotland extended their lead in the 57th minute when Tommy Conway smashed a shot against the post and Mulligan followed up to hammer the rebound into the net from an angle.

As the game wore on Northern Ireland upped the tempo.

On 67 minutes substitute Terry Devlin fed fellow sub Ross McCausland and his snapshot was palmed away by Slicker. And McKee, who was also a second half substitute, had a close range shot blocked.

In the 72nd minute Northern Ireland pulled a goal back. McCausland skipped past his marker down the right and delivered a lovely cross into the area which was headed into the net by McKee.

Doak sprang to life again for the Scots in the 80th minute. After a series of step-overs he lashed a deflected shot wide of the upright from an angle.

The lively McCausland found Alfie McCalmont with a long ball into the area, however the midfielder was unable to connect with the ball.

Right at the death Northern Ireland should arguably have had a second. Devlin, bursting into the area, had a shot well saved by Slicker. McCausland picked up the rebound and blasted the ball goalwards but Scottish defender Adam Devine managed to clear it off the line.

Northern Ireland’s U21s will have an opportunity to quickly get the defeat out of their system when they play the Scots in a second friendly at St Mirren’s SMiSA Stadium in Paisley on Sunday (25 September, 14.00).