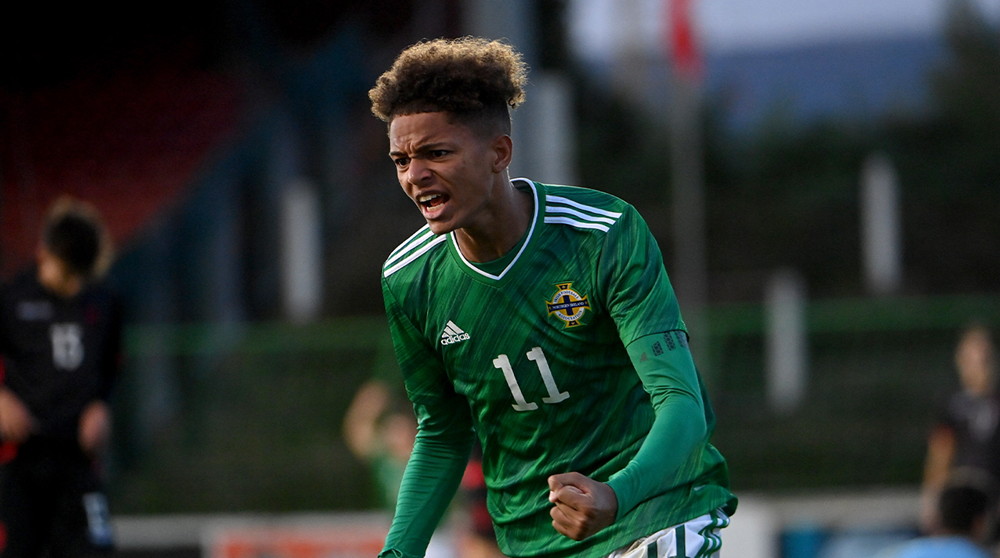 Above: Aston Villa's Omari Kellyman is part of the Northern Ireland men's U19 squad

Northern Ireland men's Under 19s will begin preparations for Euro qualifiers later this year by taking part in an international tournament in Spain this month.

U19s boss Gerard Lyttle (pictured, below) has called up more than a dozen new faces to his squad for the Football Federations Cup in Albir.

It’s an under 18 tournament, however all of the players travelling to Spain fall into that age category.

Northern Ireland are set to face Norway, Belgium and Czech Republic in the Football Federations Cup.

Lyttle’s squad will be travelling to Spain on Monday and their first game is against the Norwegians next Wednesday (23 March) at L’Alfas del Pi in the province of Alicante, with a 4pm start.

Next up at the same venue is a match against the Belgians on Friday 25 March (noon) followed by the game against the Czechs on Monday 28 March (noon) which is also being played at L’Alfas del Pi.

Eight of the players in the 22-strong squad were either involved in Euro qualifiers or friendlies for the U19s back in the autumn.

And Lyttle will be bringing along four players who impressed for Northern Ireland U17s in Euro qualifiers back in the autumn. They are Brighton and Hove Albion defender Ruairi McConville, Aston Villa forward Omari Kellyman, Derry City defender Darragh McCloskey and Portadown defender Reece Jordan.

Also stepping up is Everton goalkeeper Dylan Graham, who has previously taken part in a U17s training camp.

Burnley midfielder Jacson Coppack, Stoke City defender Josh Roney and Fleetwood Town pair Harry Wilson and Jake Wallace all miss out due to injury, while some other players who featured for the U19s back in the autumn are now too old to play at U19 level.

The 2022-23 UEFA European Under-19 Championship qualifying round will run from 21 to 27 September and 16 to 23 November, with 13 groups beginning the road to the eight-team finals in Malta.

The top two teams in each group will join top seeds Portugal in the spring 2023 elite round along with the third-placed team with the best record against the top two in their section.

Northern Ireland have been drawn in Group 13 along with Netherlands (hosts), Slovenia and Moldova. Their games in the qualifying round are scheduled to be staged from 21 to 27 September.