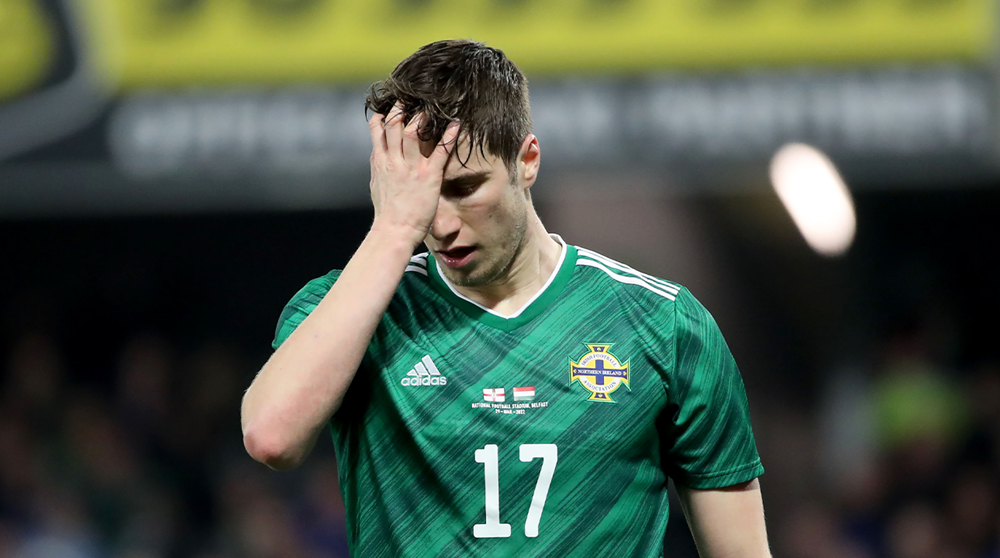 Northern Ireland were narrowly beaten 1-0 by Hungary in an international challenge match in Belfast tonight.

Following the 3-1 away friendly win against Luxembourg on Friday, Ian Baraclough was keen for his side to keep up the momentum ahead of four UEFA Nations League matches in June.

Although they did not win the match, there were still plenty of encouraging signs for the senior men’s team manager.

Northern Ireland produced the better chances across the 90 minutes and were only undone when Hungary punished a mistake.

Early on Gavin Whyte had the crowd on the edge of their seats as he went on a mazy run towards the area, however he lost his footing as he was about to pull the trigger.

On 10 minutes Northern Ireland captain Steven Davis was unlucky not to open the scoring with an audacious effort. He ran on to a loose Zsolt Nagy pass close to the edge of the area and curled a wonderful right foot shot past Hungary goalkeeper Denes Dibusz which clipped off the base of the post.

In the 18th minute Niall McGinn whipped in a dangerous cross which was punched away by Dibusz,

A one-two between debutant Paddy Lane and McGinn led to the latter feeding Whyte. He jinked his way into the area, however he was blocked off by Hungarian defender Willi Orban and the ball squirmed away from him.

Hungary playmaker Dominik Szoboszlai stepped up to take a free-kick but shot straight at the wall before attacking midfielder Roland Sallai drilled an effort wide of the post.

On 31 minutes Paddy McNair skied the ball over the top, while down the other end Bailey Peacock-Farrell smothered a low drive from Sallai. And then the Northern Ireland keeper plucked a Nagy cross out of the air just under the bar as Hungary probed.

In the 40th minute Josh Magennis flicked a header on to Whyte who squared it to McGinn and his snapshot was superbly tipped around the post by Dibusz.

Just after the restart substitute Dion Charles appeared to be pushed in the back by Hungary defender Adam Lang as he raced into the area, however referee Rob Harvey waved appeals for a penalty away.

On 50 minutes Ciaron Brown slid in to turn a Loic Nego cross out for a corner before Andras Schafer blasted a shot over the bar.

Hungary took the lead on 56 minutes. McGinn’s pass back to the keeper fell short and Sallai nipped in to round Peacock-Farrell and stroke the ball home.

Very few chances were created as the game became scrappy. Cathcart made a last-ditch clearance as Hungary threatened on 76 minutes.

In the closing stages Northern Ireland piled on the pressure as they went in search of an equaliser.

Cathcart released substitute Stuart Dallas down the left. His cross into the area was flicked on by fellow sub Shayne Lavery and Charles was just inches away from connecting with the ball four yards out.

Then sub Jordan Thompson whipped in a lovely ball which was met by fellow sub George Saville but Dibusz saved his powerful header.

Moments later a back post header from debutant Trai Hume, who had also entered the fray from the subs’ bench, was saved by the keeper, who dived at full stretch to keep it out.

Right at the death Dibusz produced another save to keep his team ahead, this time from a close range Charles effort. And Lavery screwed an effort wide moments before the ref blew the final whistle.

Northern Ireland’s next game is a Nations League C2 encounter at home to Greece on 2 June followed by an away trip to Cyprus on 5 June. Earlier today Cyprus defeated Estonia 2-0 in a play-out (2-0 on aggregate) to retain their place in League C.

The third match for Baraclough’s boys in June, on the 9th, is away to Kosovo before they entertain the Cypriots at home on 12 June.