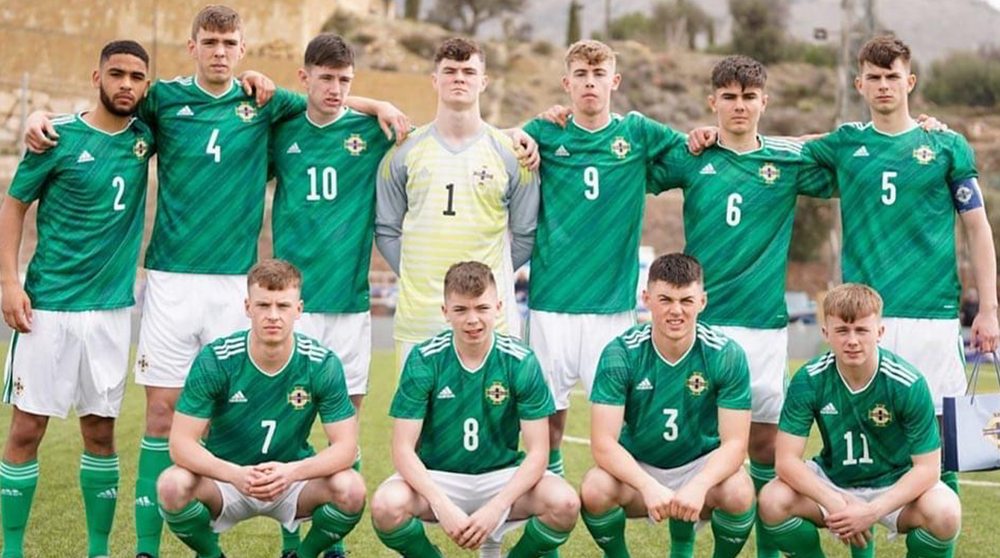 Northern Ireland’s U18s got their Football Federations Cup campaign off to a solid start by defeating Norway U18s 2-1 in Spain.

Northern Ireland are participating in the four-team tournament in Albir as part of preparations for U19 Euro qualifiers later this year.

Gareth McAuley took charge of the team in the absence of U19s and U17s manager Gerard Lyttle, whose father sadly passed away at the weekend.

McAuley’s team had to come from behind to claim victory in today’s game at L’Alfas del Pi in the province of Alicante. The game was due to be played yesterday but was postponed as a result of heavy rain.

The Norwegians bossed the early exchanges and Northern Ireland keeper Stephen McMullan made a good save with his feet.

Jamie McDonnell produced a strong tackle and released Conor Falls who in turn fed Charlie Lindsay, however he was forced wide and was unable to get a shot away.

On 11 minutes Matthew Carson conjured up a pinpoint delivery from a corner which was met by Michael Forbes, however the defender’s header was cleared off the line.

Just after the half-hour mark Norway capitalised on a defensive error and swept the ball home to take the lead.

Northern Ireland finished the half strongly. Carson played in Mackenzie Kirk and he whipped in a dangerous cross, however there was no-one there to meet it.

Five minutes after the break the boys in green and white equalised. A Carson corner was cleared as far as Lindsay inside the area, however he was chopped down as he was about to pull the trigger. The ref immediately pointed to the spot and Lindsay stepped up to confidently convert the penalty and make it 1-1.

A last ditch tackle by Ruairi McConville kept the Norwegians at bay before McDonnell found Lindsay down the left. The midfielder let fly but his effort went wide of the post.

On 70 minutes Northern Ireland took the lead. McDonnell intercepted the ball on the half-way line and found Lindsay, who stroked it to substitute Aaron Wightman and he cleverly chipped the ball over the advancing keeper into the net. It was a sweet finish.

Norway went in search of an equaliser and Brodie Spencer made a crucial tackle as they looked certain to score.

McAuley’s side played some excellent football throughout the game and deservedly held on for the win.

The Football Federations Cup competition in Albir also features Czech Republic and Belgium, whom Northern Ireland will face in their second game - on Saturday (1pm).

Their match against the Czechs is scheduled for Monday (28 March) at noon. Both of the remaining games are being played at L’Alfas del Pi.