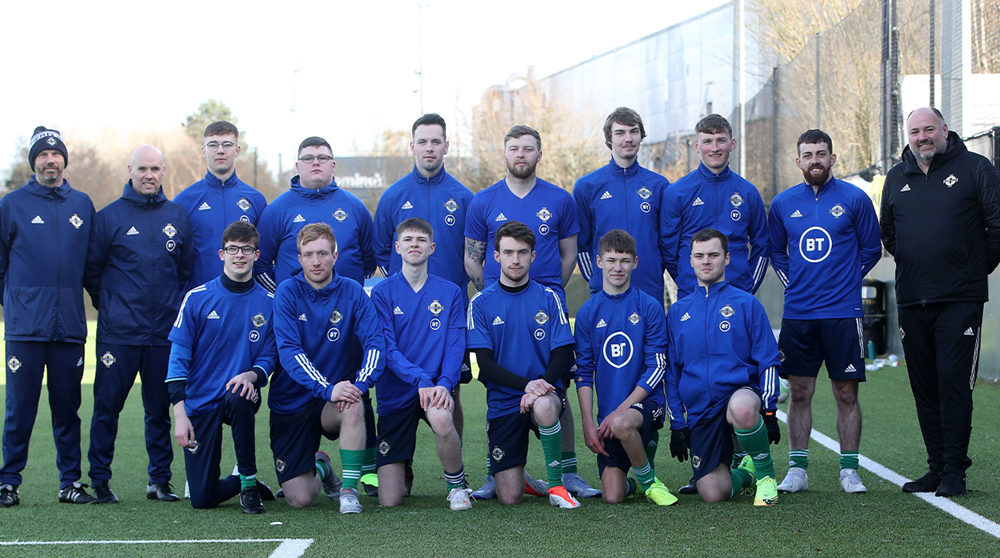 Northern Ireland’s Cerebral Palsy team will have a mixture of youth and experience in their ranks when they compete at the World Cup in Spain next month.

Team boss Alan Crooks has revealed he will be taking a 12-strong squad to the tournament in Salou (27 April to 16 May) and it features four players with previous experience of two World Cups.

Northern Ireland are currently ranked 20th in the world in the seven-a-side Cerebral Palsy game and they could come up against CP Football powerhouses such as Brazil, USA and England in Spain.

The CP squad are scheduled to be in Salou from 27 April to 16 May and it will be Northern Ireland’s third appearance at the CP Football World Cup organised by the International Federation of CP Football (IFCPF). They finished in 14th place in England in 2015 and 11th in Argentina in 2017.

Crooks explained: “We are going with a relatively young squad but have four players that have played in the previous two World Cups in Jordan Walker, Jordan Cush, Ryan Walker and Charlie Fogarty. We will be looking to them to lead by example and encourage the younger players.”

In addition Matthew Gildea, Shea Tigh, Ryan Neill and Sean Coyle all have experience from the World Cup in Argentina in 2017 and/or the European Championships in Holland in 2019 and Crooks says they will also be key players in Salou.

The manager explained: “For some this will be their first taste of international competition. Fitness levels and morale are high and as we enter the final stages of preparation there is a genuine excitement around the camp about representing Northern Ireland in a World Cup in just a few weeks’ time. They are looking forward to the challenge ahead.”

Members of the CP squad have been involved in weekend training camps every fortnight since October. Their preparations have included friendlies against Scotland and Republic of Ireland as well as against disability teams from within Northern Ireland, including Linfield, St James’ Swifts and CSP.

Crooks’ backroom team in Spain will include former Northern Ireland international Mal Donaghy, who coaches the team. Stephen Watson also undertakes coaching duties, while Lee Rutherford is the goalkeeping coach. Steven Conlan is the team’s strength and conditioning coach and Andrew Harwood is the physiotherapist.