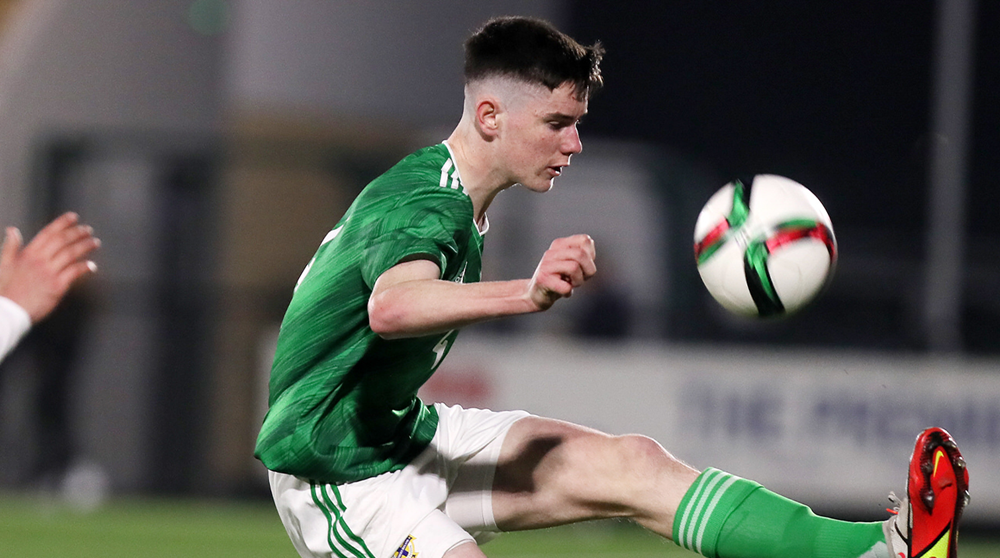 Northern Ireland U18 Schoolboys suffered a late sucker punch as they fell to a narrow Centenary Shield defeat to England at the Blanchflower Stadium.

England started with more promise, coming close on seven minutes when Jack Bates skimmed a corner across from the right for Josh Stones to head just over from the edge of the six yard box.

Then, just a minute after that Demico Burton freed up Freddie Legg to test Rian Brown with a powerful right-footed effort from outside the area but the Northern Ireland keeper did well to respond with a diving save to turn the ball away.

But Brown was beaten around 90 seconds after that with a fine first time finish from Legg after getting on the end of perfectly delivered defence splitting pass from Bates.

However, rather than let their heads drop, Northern Ireland methodically worked their way into the game and deservedly levelled seven minutes from the break courtesy of a superb Jack McFeely effort.

Lewis Tosh provided the assist for the Coleraine man to unleash a stunning right-foot arrowed drive past the despairing Harvey Keogh from around 25 yards.

Tosh had a chance to edge Northern Ireland in front on 43 minutes after finding room inside the area but Keogh got down to save his effort while, at the other end, in first half stoppage time, Stones produced a stop from Brown after connecting with another through ball.

After the break, the base of an upright came to England's rescue after Tosh whipped a low ball in from left on 51 minutes with McFeely poised to pounce.

Shane Haughey was next to create an opening for Northern Ireland when, on 64 minutes, Shane Haughey engineered some space before testing Keogh but the visiting keeper proved equal to the challenge.

Then, not long after that, Haughey picked up a loose ball in the middle of the park and brought it forward to the edge of the area before laying off for Jack Montgomery but, again, Keogh made the save.

Moments later McCoubrey delivered a cross from wide of the right with Tosh just failing to make the most of some indecision in the English defence.

England forced a series of corners midway through the second half, and almost made one count when Ashton Fox flicked a close range header just the wrong side of the far post, before played switched back to the other end for McFeely slot home what he thought was his second of the game only for the referee to rule it out for a foul earlier in the move.

Ryan McKay was unlucky on 78 minutes after collecting a clearance, darting down the right and striking the top of the post and crossbar.

And there was another opportunity a few moments after that when Odhran McCart played the ball forward with both Haughey and Keogh rising for it at the right post only for it to drop just the wrong side of the post.

But, for all their endeavour, Frankie Wilson's side were dealt a hammer blow right at the end of normal time after substitute Bailey Hall played the ball across the face of goal for the unmarked Stones to slot home from six yards.