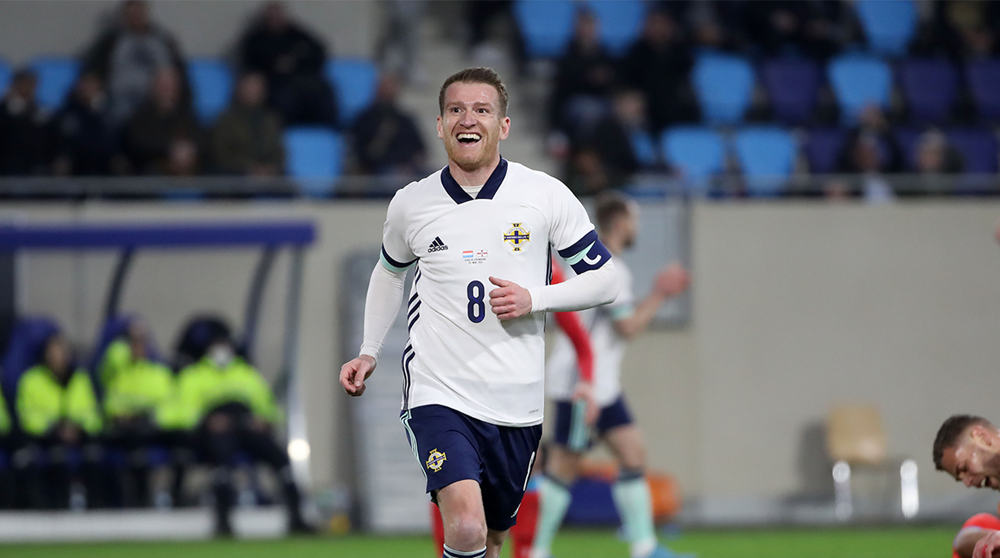 Northern Ireland started their 2022 calendar of fixtures with a 3-1 away win against Luxembourg.

Late goals from Steven Davis, winning his 133rd cap for his country, and Gavin Whyte alongside a fine first half strike from Josh Magennis helped Ian Baraclough’s side ease to victory in an international friendly at the Stade de Luxembourg.

The game, played in front of 4540 spectators, looked to be heading for a draw before the two second half substitutes popped up to score the decisive goals.

There was a dynamic early burst into the opposition box by Shayne Lavery but no-one could get on the end of his delivery across the face of goal.

In the eighth minute Jordan Thompson strode down the middle, leaving a couple of players in his wake, and fed the ball to Lavery, however his low drive drifted just wide of the post.

Down the other end Luxembourg had their first effort on goal, the lively Danel Sinani curling a shot wide of the post.

In the 16th minute Josh Magennis opened the scoring for Northern Ireland. He nicked the ball off Luxembourg defender Maxime Chanot down the right and cut into the area before planting the ball low into the far corner with his left peg. It was a smart finish.

On 24 minutes Corry Evans pounced on a loose ball just outside the area and fired in a shot, however Moris comfortably gathered the ball.

Luxembourg striker Gerson Rodrigues skied a free-kick over the bar as the hosts tried to get a foothold in the game and then he blasted another effort over the top. And Tom Flanagan turned a dangerous low cross from Olivier Thill behind for a corner.

As half-time approached Lavery burst forward, with Jonny Evans running at full pelt beside him, however the striker lifted his shot well over the bar.

Goalkeeper Luke Southwood made his debut for Northern Ireland in the second half. He handled the ball well and got down swiftly to smother a shot from Michael Pinto on 53 minutes.

Luxembourg captain Laurent Jans whipped in a dangerous cross which Craig Cathcart headed out for a corner.

The home side scored from the resulting corner to make it 1-1 in the 58th minute. Sinani launched the ball into the box. It skimmed off the head of Cathcart and Marvin Martins arrived at the back post to head the ball high into the net.

In the next Luxembourg raid Southwood produced a good stop to keep out a low Sinani shot, and then he had to make saves in quick succession from Rodrigues and substitute Enes Mahmutovic.

Baraclough made a quadruple substitution just after the hour mark, with Steven Davis, Dion Charles, Gavin Whyte and Ciaron Brown entering the fray.

Chances were few and far between as the game entered its final quarter, however Southwood was called into action again to clasp a free-kick from substitute Vincent Thill.

A fine passage of play resulted in Northern Ireland’s second goal on 83 minutes. Whyte slipped the ball to fellow substitute McGinn who crossed to Charles at the back post. The striker’s effort was blocked, however the ball fell to Davis and he tucked it home from close range.

Two minutes later it was 3-1. Southwood punted the ball downfield. As the home defence dithered Whyte collected the ball and raced forward to stroke it under Moris into the back of the net. It was a lovely finish.

McGinn tested Moris with a low drive as the clock ran down, and then Whyte produced another blistering run. His clever cross with the outside of his right foot was collected by Moris in the nick of time as McGinn closed in.

The victory will have pleased Baraclough ahead of Tuesday’s friendly in Belfast against Hungary and the four UEFA Nations League matches at the start of June.