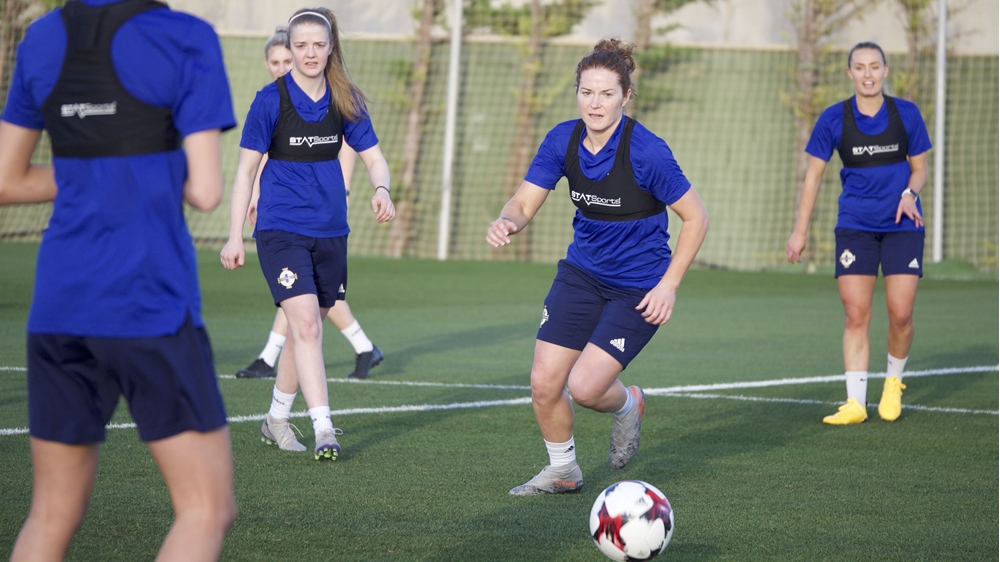 Northern Ireland senior women’s team are gearing up for kick-off in the Pinatar Cup games in Spain today.

Kenny Shiels’ squad go up against Iceland at the Pinatar Arena in Murcia this afternoon (2pm kick-off GMT) and they will be aiming for a strong start with matches against Ukraine and Scotland also on the agenda over the next week.

With match fitness a vital, the games are being played in preparation for next month's crucial UEFA Women’s Euro 2021 qualifier away to Belarus.

Shiels has a 20-strong panel to choose from with a good blend of youth and experience in the camp.

The team has been at their Spanish base since Monday and midfielder Chloe McCarron says the players are in good spirits ahead of the tournament opener.

“Training has been brilliant. It’s been good to get in with all the rest of the girls and everyone is up for the games we have ahead of us,” she said.

Manager Shiels has been in the Northern Ireand hotseat less than a year but McCarron says he has already made a big impact.

“He’s come in and he’s given players an opportunity and he’s changed our whole style of play and it’s a style of play that suits us as a group and it shows that we can play football.

“Things like competition for places is a lot harder because Kenny has brought in a lot more players, including the younger ones. There are a lot of U19s players in this camp and they have a good chance to come to Belarus next month so it is all about fight for your place.

“When you’re playing and training with players who are playing at a higher level you’re always going to have areas to improve on and they can always lift the tempo of the training session and a game and push everyone else on.”

She added:” We know how difficult it’s going to be. Scotland were in the World Cup finals last year and they were brilliant so we expect a tough fight from not just them but Iceland and Ukraine as well.”