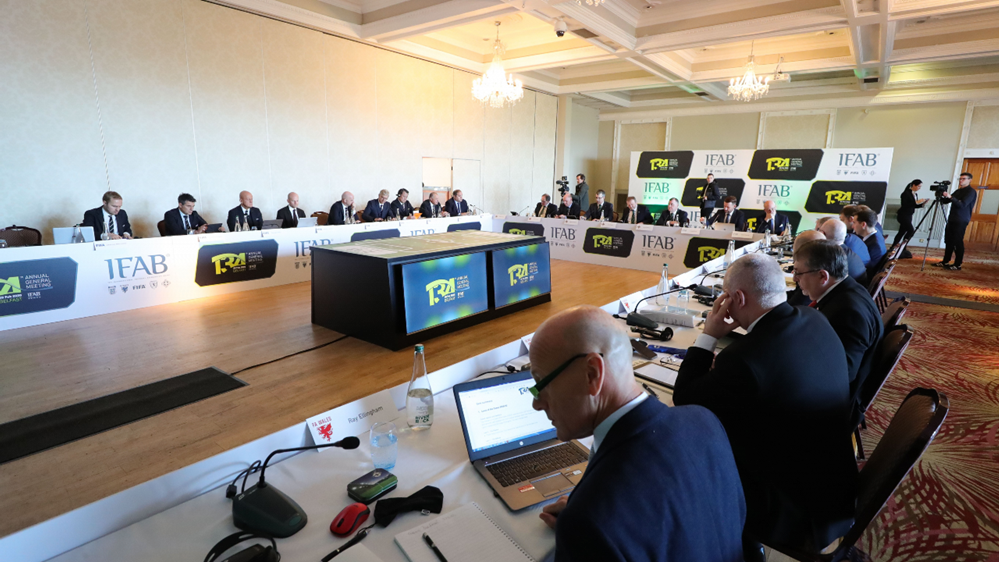 Football’s lawmakers have agreed to look at changing the offside law to foster the spirit of attacking play.

A consultation on offside and trialling new protocols on concussion were agreed by The International Football Association Board (IFAB) at its annual general meeting, which was staged in Northern Ireland at the weekend.

The Culloden Estate Hotel and Spa in Holywood, Co Down, was the venue for IFAB’s 134th AGM. It was chaired by Irish FA President David Martin.

The lawmakers agreed to draw up protocols to be used in trials for substitutions in cases of concussion.

Following feedback from the recent meeting of the Concussion Expert Group (CEG), The IFAB also agreed that more research data is required before proposing possible changes to the Laws of the Game.

FIFA indicated a strong interest in having trials at the men’s and women’s Olympic Games football tournament in July 2020, with other competitions also being able to take part in the trials.

The AGM agreed to consultation with all relevant stakeholders, including The IFAB Technical Advisory Panel (TAP) and the Football Advisory Panel (FAP), to review the offside law to foster the spirit of attacking play.

The IFAB will also continue to look at measures within the Laws of the Game to tackle mobbing of match officials and confrontations between players which, it said, should have no place in the game.

Members were updated on the use of video assistant referees (VARs) around the world, highlighting the success of this innovation while also considering future developments, including improving communication and potential technological advances.

The meeting also agreed on the importance of finding solutions to allow competitions with restricted budgets to be able to access and use VARs, with such solutions being led by a working group for innovation excellence that has been established by FIFA.

The AGM reviewed the changes to the 2019-20 Laws of the Game and noted their positive impact on the way the game is played and the image of the game.

The AGM also approved clarifications to several existing laws to the 2020-21 Laws of the Game. These changes relate to Law 10 (yellow cards are not carried forward into kicks from the penalty mark), Law 12 (handball, to differentiate more clearly between the arm and shoulder) and other clarifications.

The meeting was attended by representatives from FIFA, led by FIFA President Gianni Infantino, the FA, the FA of Wales, Scottish FA, Irish FA and The IFAB’s administration.