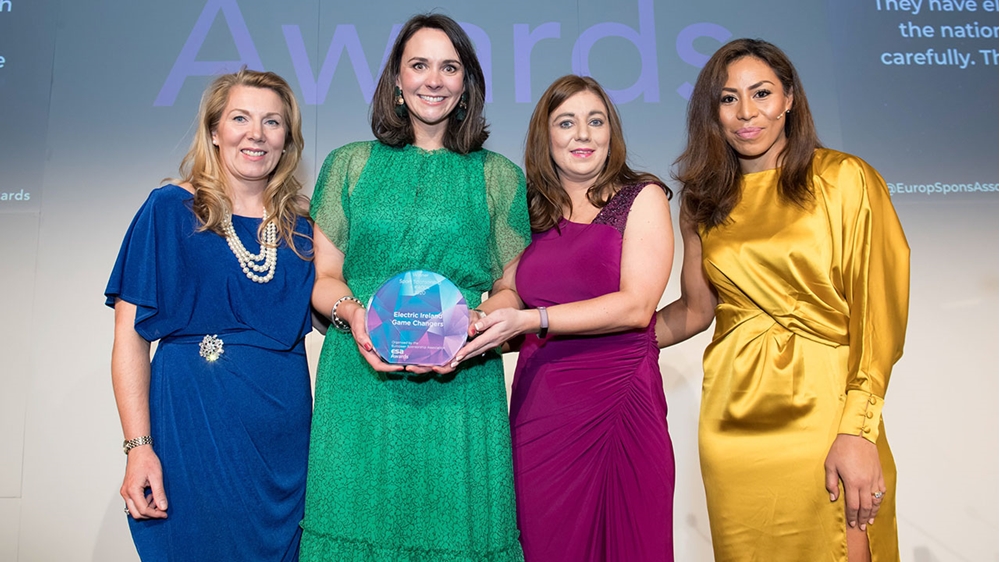 The Game Changers campaign, which promotes girls’ and women’s football in Northern Ireland, has picked up two major sponsorship awards.

They were among four accolades won by Electric Ireland, which backs the Irish Football Association-run campaign, at the 2020 European Sponsorship Awards.

The energy provider won the main award in the purpose-led sponsorship (sport) category and the sport sponsorship <€400k award for the Game Changers campaign.

In the purpose-led sponsorship (sport) category they pipped Arsenal and Octopus Energy’s sustainability programme to the top prize. And the category shortlist also featuredKia’s sponsorship of the UEFA Europa League Trophy Tour and the SAP/Manchester City Community Heroes campaign.

ESA judges praised Electric Ireland’s partnership with the Irish Football Association. They said: “This sponsorship is deeply rooted in community change and the judges were very impressed with the level of insight and commitment to the cause shown by Electric Ireland.”

The annual awards showcase the best sponsorship campaigns coming out of Europe and Electric Ireland won two further accolades at the ESA awards gala in London: mass participation sponsorship for Darkness Into Light, a suicide prevention campaign with Pieta, and best use of digital channels for the Electric Ireland-sponsored GAA Higher Education Championships.

Electric Ireland was also highly commended in the community sponsorship category for the Game Changers campaign and for its purpose-led sponsorship of Darkness Into Light.

The energy provider has enjoyed considerable success in the awards over the years and now holds 14 European Sponsorship Awards in total.

Stephen Bogle, head of sales and marketing for the Irish FA, said: “Our partnership with Electric Ireland is helping amplify the amazing work going on across Northern Ireland to encourage more women and girls into the game. We're delighted that the efforts of each and every game changer have been recognised at the highest level.”

Clare McAllister, Northern Ireland Residential Manager for Electric Ireland, said: "Our sponsorship investment is based on a deep understanding of the concerns and passions of our customers in Northern Ireland and it’s great to get this recognition on the European stage for programmes that resonate with consumers.

“We are delighted that our campaigns have been recognised as best in Europe across a range of categories, demonstrating our commitment to the communities we serve.”