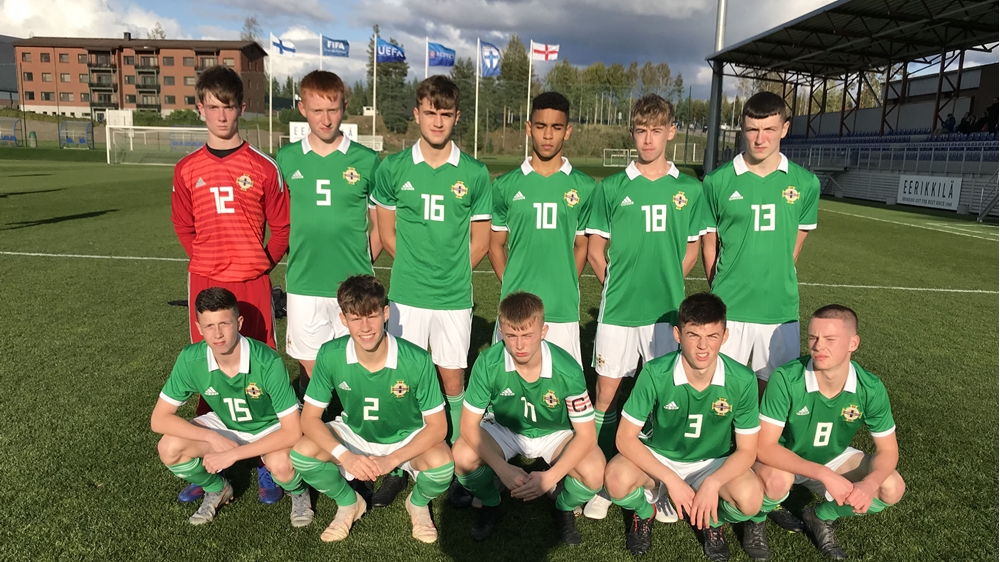 Northern Ireland’s U16s won the second of their two challenge matches against Finland’s U16s this week.

After earning a 1-1 draw in the first game – a match which they should have won given the number of chances they created - Gerard Lyttle’s team ensured there would be no repeat in game two and they deservedly won the contest 3-2, although they needed a dramatic last gasp goal from substitute Elliott Wood to seal the victory.

The visitors got off to a great start in the match at Eerikkila. Matthew Carson opened the scoring after 13 minutes, volleying the ball into the roof of the net after the Finnish keeper could only parry away a fierce drive from Jake Wallace.

Four minutes later Carson almost added to his tally as he cut in from the right but his shot from the edge of the box grazed the crossbar.

Northern Ireland continued to dictate the play with Conor Falls and Charlie Lindsay both going close with good efforts.

On the half hour Finland missed a great chance to draw level. Jimi Tauriainen outpaced the Northern Ireland defence but shot straight at Alex Henderson who turned the ball over the bar.

Soon afterwards Henderson was in action again, producing a fine save to deny Liam Moller.

A minute after the restart Finland did find an equaliser. Santeri Kotila drove into the box and held off challenges from two defenders before stroking the ball into the corner of the net.

Northern Ireland pushed forward again and a header from Falls was stopped on the goal-line by Finnish keeper Aki Petokorpi, while Lindsay looked certain to score but could only find the side netting as he cut in from the right.

The goal which Northern Ireland deserved came after 63 minutes, with man of the match Carson firing a low drive from 20 yards just inside the upright.

The lead proved to be shortlived, however, as Bobby Deane brought down Tauriainen inside the penalty area and Alti Heliemaa stepped up to smash the spot kick past Henderson.

In the closing stages both teams pushed hard for a winner and it arrived for Northern Ireland in dramatic fashion in the first minute of added time. Lindsay floated over an inviting cross and Elliott Wood rose high to plant a header past Petokorpi to give Northern Ireland their first win at this level in Finland since 2013.

U16 Schoolboys manager Gerard Lyttle was delighted with the performance of his young side and now looks forward to the visit of Poland next month for games at Shamrock Park and The Oval.